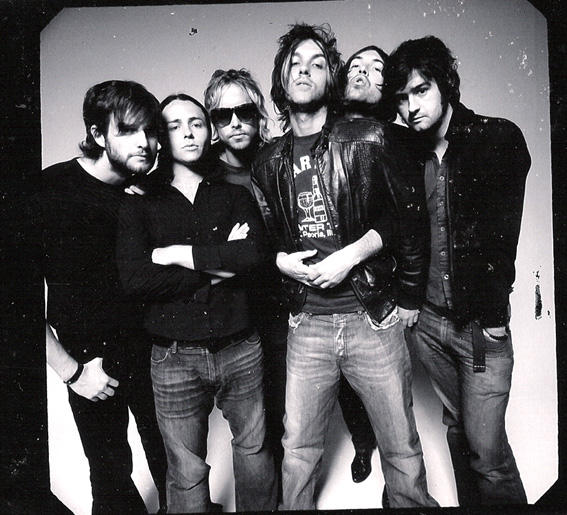 FOREWORD: Out of Berkshire, England, came prog-rock revivalists, Cooper Temple Clause. Though less known in America since forming ‘round ’98, these prescient Brits knew how to effectively make lengthy jams that rocked out and rarely meandered. Their instrumentation, light years beyond unseasoned indie rockers, caused a minor revival of technical guitar efficiency and acrobatic playing a la Jimi Hendrix, Jeff Beck, and Jimmy Page. After this ’04 interview, they belatedly released ‘06s lesser Make This Your Own on a stagnant major label. By ’07, it may’ve been over for the boys, but future generations will come to appreciate their dynamic cognizance and multi-tiered complexities.

Taking their busy moniker from a straight-to-video film to avoid the single word name deluge of Brit-pop idols such as Blur, Oasis, and Pulp, Cooper Temple Clause laid down their first spontaneous tracks for two formative EP’s at a windowless pig farm converted into a backwoods studio. The first, Hardware, includes concert staple “Devil Walks In The Sand” and lovely ballad “Sister Soul” while its impulsive follow-up, Warfare, sports the nifty instrumental “Mansell” plus an early acoustic take on the mighty “Panzer Attack.”

I caught up with the otherwise good-humored Gautrey as he was “getting domesticated” just days prior to recording what will become CTC’s third full-length.

AW: How will your third album differ from previous endeavors?

BEN GAUTREY: We’ve come a long way from being six mates mucking about not taking responsibility for their actions. (laughter) To be honest, the way we write, it never goes according to plan. We’ll have to see what happens. With the second album, we realized a sense of melody in the band that was lost on the first album. So we tried to get a stronger melodic sense. We’ll try to make the third record more punctual. We’re looking for songs that work live because with Kick Up The Fire the songs were born out of the studio. So we never got a chance to amend the songs. We built them up with the flow and went with the spirit and how it felt. We had to learn to transpose them live when it came to touring the record. So we want to get that sort of energy back in the studio.

Throughout Kick Up The Fire, your band employs succulently eerie moodscapes and ethereal movements to perfectly counter louder, guitar-driven segments.

It’s a challenge. We always want to make each album sound different from the last. There’s only two ways to go. You could go for prog and make 12 to 15 minute songs which we can be real keen on with your ice skating and King Arthur-like Rick Wakeman or you could try to make shorter songs to see what happens. We definitely want to tour a lot so we want to make songs that work live. Who knows? We could end up with epic songs.

You mentioned Yes keyboardist Rick Wakeman. I grew up loving prog-rockers such as Soft Machine, Hawkwind, and King Crimson. Do these bands affect your muse?

No. Out of all those bands we only have one prog-rock album. We’re into Pink Floyd. And even with Pink Floyd, it was only Pipers At the Gates of Dawn and Dark Side of the Moon that struck the six of us. Maybe The Wall, but definitely Pipers with Syd Barrett. He was a big inspiration for the band, especially Dan Fisher, our guitarist, who says Syd Barrett was his first guitar hero.

“Into My Arms” seems to have a surreal solemnity closer to Pink Floyd’s ’83 album, The Final Cut, which came later than the albums you discussed.

We didn’t get heavily involved with that one… Syd was featured in an Underworld video recently, which is quite strange.

We’ve played live more than any UK band. They use hype and the press machine to get rolling. They play maybe ten gigs to crowds of 2,000 because they’ve been praised by a magazine or hailed as the greatest band ever, whereas we didn’t like that and found that very fake. We come from the school of thought where we like to find out and make our own decisions if we like a band despite newspaper coverage. Some of our favorite bands tour a lot like in the ‘70s. Back then, it was up to the fan to go to your gig and determine if they liked you because you were available. A lot of these new bands aren’t available and you can’t get a clue if you like them until you buy the record.

How long has your band operated its own rehearsal space?

We had our first rehearsal space we could use whenever we wanted when we were 16. It was next to these pigs on the farm. But for the first album, we went to an expensive studio thinking it’d be amazing. You know, “Bohemian Rhapsody” was recorded there and sounded great. We realized by the end of recording that we didn’t feel comfortable. We enjoyed our own rehearsal space. For the next album, we moved around the corner from the pigs and next to the owls. We started building a studio, which was vital to pick up our own sound. We weren’t disturbed there. Nearest shops were five miles away. We were out of the way. It was difficult to leave. Just six of us and our producer without anyone else hearing it. No people turned up to disrupt or give their penny’s worth. It was a very honest album, more focused and coherent than the first. We had the great luxury to build, record, write, and mix an entire album. We’re going back to that studio Monday.

Did you have much time to record the first album?

We played local venues and got signed quickly. Half of it was written in the studio. There were three years between writing the first to last song. We’re proud of it but some songs felt out of place with each other. It’s disjointed.

We’re not scared to tackle different sonics because we’re such big fans of the music we listen to. That inspires us. We don’t want to be just a guitar heavy band. We want to create something new. We’re sick of bands from the last five years just aping styles from years ago. That’s so derivative and unexciting. Artists we admire, like Bowie, Aphex Twin, and Radiohead, try to do something new without becoming predictable. All of us write the songs. It’s a great mini-democracy. Some are into Sonic Youth, Pavement, Grandaddy, Breeders and Pixies. Others are into Godspeed! You Black Emperor or classic Hendrix and Led Zeppelin. The dance freaks are into Squarepusher and Kid Kaola, going back to Kraftwerk. Even grunge and Brit-pop edge their way into our music – from Nirvana to Massive Attack.