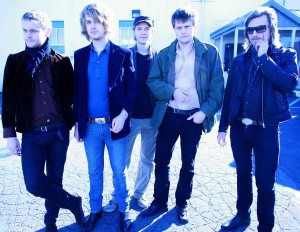 Though the Hives led the Scandinavian garage rock revival initially promulgated by fellow Swedes such as The Refused and Hellacopters, primal Finnish mavericks the Nomads, plus doom-y Norwegian glam-punks Turbonegro, a less maniacal sound may upend these primal troupes as well as the puissant death-metal mavens crowding the Nordic underground. Hailing from Denmark, the smallest and least musically represented of these neighboring nations, the Figurines conveniently flirt with disparate Anglo-pop styles and assuredly merit the same immediate universal acceptance Copenhagen-based noise-pop peers, the Raveonettes, received a few years back.

“When I was a teen in the ‘90s, there were no good Danish bands at that time,” Figurines leader Christian Hjelm recollects. “I started playing guitar because of Creedence Clearwater Revival. At ten-years-old, I heard “Have You Ever Seen The Rain.” I asked my father who that was, and he said it was one of his favorite bands of the early ‘70s. He gave me one of their old tapes, brought down a worn guitar from the attic, and taught me to play.” 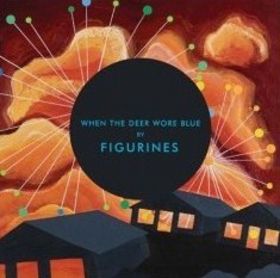 “Pavement was the first band we heard as part of the ‘90s underground. Steve Malkmus has always been a main source of inspiration,” Hjelm admits. “Beforehand, at age thirteen, we all listened to Nirvana and the grunge wave. But I never thought the music I listened to was only British or American. It was (ubiquitous). Denmark is a little country so we got music from the outside.”

Hjelm claims the Figurines rudimentary ’03 long-play debut, Shake A Mountain, had “our typical sound – clean indie guitar affects and all ten tracks were very melodic. It was a low budget recording, yet quite nice.”

More personal and straightforward sans some of the cryptic situational superstitions, When The Deer Wore Blue digs deeply into passionate requiems, juxtaposing its serendipitous pensiveness with jumpy jamboree jaunts. Moonlit moog-burbled metaphoric serenade “Good Old Friends” and poignant love dirge “Angels Of The Bayou” prove to be midnight blue. Chirped lullaby, “The Air We Breathe,” commences with long harmonic ‘aaah’s’ lifted from the Beatles’ exquisite “Because,” then slips a dainty harpsichord melody beneath oncoming symphonious Beach Boys crooning. Between the recessive contemplative slowdowns and grandiose Goth retreats are quick-paced psychedelic scamps unafraid of showing off their capricious rusticity. Mystical Carnaby Street-styled pop changeup, “Half Awake, Half Aware” summons the ‘60s best while lightheartedly vivacious “Let’s Head Out” and organ-gurgled stop-and-go scoot “Hey Girl” hurriedly pick up the beat. Catchy danceable jingle, “Bee Dee,” shimmies and shakes all over the place.

“I get the will to write songs by hoping to get better. I want to keep creating good original material. We always want to challenge ourselves,” offers Hjelm. “The song, “The Air We Breathe,” was done over two different periods. The wordless intro had basic up-front harmonies with the following verse written first in my apartment. We liked the idea, but felt it needed more, so we got together and wrote the ‘out in the street’ section and arranged it dynamically like the rest. It’s difficult to find the right tracks to create proper moodiness. Too many slow songs could get boring. It was quite a task to get a coherent feel. We worked on it a long time.”

“That’s very fragmented. You could call it grand. The different movements of “Childhood Verse” have a straight borderline between them- which I find interesting,” relates Hjelm.

It remains to be seen if Deer has as enduring a shelf life as its precursor, Skeleton, but this much is true, no matter which disc has longer legs, both deserve recognition for their undeniable pop-smarts and fantastical flare for the dramatic. And the occasional schizophrenic medieval visages stand up right alongside the less outlandish straight-ahead rock flashes.

Sure it may seem too early to predict the Figurines next move. Though they’ll probably build upon the successes of the last few esteemed albums. Could some of their cinematic orchestrations land in a few Hollywood movies as soundtrack fodder?