FOREWORD: Relying on old-fashioned rock ‘n soul to strike a chord with subterranean homesick dudes, British singer-songwriter began releasing an album per year since ’95. Her recent three albums fronting the Brokeoffs made no headway in America, but were rightfully critically praised in England. I spoke to the diminutive lass in ’03 to promote multihued delight, Truly She Is None Other.

You’ve got to hand it to Holly Golightly for sticking around just long enough to finally receive decent American exposure. Thanks to her association with underground icon Billy Childish, the indie-minded Brit began Thee Headcoatees (with a few ex-Delmonas) as a female-led alternative to her mentors’ similarly scruffy ‘80s scrap-rock splinter groups Thee Headcoats, the Milkshakes, the Pop Rivets, and Thee Mighty Caesars. Soon, she befriended vintage garage-rock denizen Liam Watson, whose London-based Toe-Rag Studios delivered the finest rough hewn ‘60s-related output. Yet despite moderate success in her homeland, Holly Golightly had failed to garner much US success despite a choice stockpile of respectable ‘90s material.

Luckily, just as the White Stripes were gaining international stardom, they recorded ‘03s critically lauded Elephant at Toe-Rag; bringing in the charmingly adolescent-voiced Holly Golightly for the off-handed coquette ditty, “It’s True That We Love Each Other.” This happy accident gave her kaleidoscopic Truly She Is None Other the forward thrust necessary to attract American listeners. Incidentally, Jack White furnishes sincere liner notes. 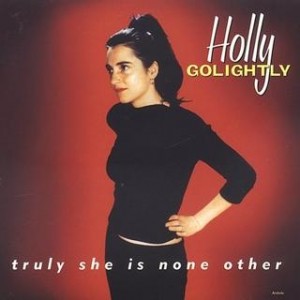 Beginning with the echoing controlled exhortation “Walk A Mile,” Holly Golightly’s liberated nasal sneer brings back sexy memories of boot-kickin’ Nancy Sinatra. That is, when she’s not reminding us of ‘60s girl groups the Shangri-La’s and Ronettes on the Kinks go-go confection “Time Will Tell” or the spare dare “You Have Yet To Win” (which seemingly crosses Mickey & Sylvia’s “Love Is Strange” with the Mc Coys’ “Hang On Sloopy”). Interestingly, an unreleased Kinks song, the haunting “Tell Me Now So I Know,” she claims to have picked up from her father, who went to art school with Ray Davies. But the best bet may be her own “This Ship,” a melancholic bass-throbbed lethargy delivered in the manner of “To Sir With Love” singer, Lulu.

Furthermore, since Holly Golightly provided sultry lead vocals to the Greenhornes’ cryptic Dual Mono cut “There Is An End,” she was able to then borrow it as None Others’ twangy spaghetti Western closer and convince guitarist Eric Stein to play on a few numbers. Coming full circle, former Milkshakes drummer Bruce Brand handles drums throughout.

I’ve heard strange rumors via the internet. One claims you were a swinging New York City socialite on the ‘60s folk scene, but you’re too young for that to be true. Another says you got into fisticuffs after drinking Nick Lowe under the table at a British pub in the ‘70s. Lastly, you supposedly told Mick Jones to change the name of pre-punk rockers the 101er’s to the Clash.

HOLLY GOLIGHTLY: (laughing) No. Somebody made that up for lack of proper information. I started with Thee Headcoatees. I hooked up with Billy Childish when he was in the Milkshakes and I’d go see them play. We’ve known each other a long time.

Are there any major musical deviations from your ’96 solo debut, The Good Things, up until now?

I don’t think this album is that different from the first one. I don’t think the songs are that different. I chose the same kind of songs I did years ago. To me, they’re all different from one another, but from the same collection. ‘97s Laugh It All Up! was a covers LP with Ike Turner, Willie Dixon, and the Jaynettes songs. It was mainly Rhythm & Blues, though I did a Kinks cover as well. ‘98s Up The Empire and Live In America (from 2000) were live albums. Serial Girlfriend (’98), for the most part, was actually recorded at home. I took it to Toe-Rag to do overdubs. So they sound slightly different from each other.

After a rush of releases there was a two-year layoff.

I was living in San Francisco for nine months and wasn’t recording. I had a double album singles compilation, Singles Round Up, and a re-issued German release. They filled the gap while I was away.

You seem to pick up a few soul music influences along the way.

Yes, I don’t listen to much white music. Generally I listen to black music like old R & B, soul, and Blues.

Unlike most white female artists – give or take Susan Tedeschi, you interpret black bluesmen rather effectively. I believe Jesse Mae Robinson’s gloomy ‘40s dirge “Black Night” had never been recorded by another woman.

That’s right. I think that’s what makes it charming – what makes it interesting. I don’t buy contemporary music. In my CD player now is a Jimmy Mc Griff disc. He’s a Hammond organ Blues player.

How’d you come up with the medley, “You Have Yet To Win,” which reminds me of early Rolling Stones?

I got the idea for that from an old Little Milton soul track. It’s three songs pasted together, It’s probably the most complicated thing I’ve done in terms of it being original. I like monotony and keeping a song the same all the way through. That’s the exception.

Garage rock icon Sexton Ming joins you on the B-side to the “Walk A Mile” single, “Don’t Fuck Around With Love.” How’d that collaboration come together?

Sexton comes from the same part of the country and is friends with Billy. He was just hanging around and we thought it would be fun to do that as a duet. I’ve known him since I was 15. Sexton played drums with us in Hamburg a month and a half ago.

Have you been receiving better exposure due to the White Stripes track?

Yeah. Certainly. That’s a given. People read my name on their CD and buy my record. But what I do is very different. It’s gotten more people to come out and see us because they’re curious. I can’t think of anybody that’s doing the type of music we’re doing.

What are the former Headcoatees doing now? Getting pregnant?

One of them is. Another is a psychiatric nurse and the other is a potter. We’ve gone our separate ways.

Does it get more difficult to turn out so much material in a short stretch?

I just keep recording as I go on. I’ve got songs in the can ready for the next record. I’ll put them together in the studio when I have free time.

On your slower songs, you croon like a diva.

I think that’s something you have to aspire to. No. I just get up and deliver songs in a business-like manner. There isn’t much of a strategy at all.

Are you inspired by ‘60s pop singers such as Ronnie Spector or Nancy Sinatra?

I hope my music has a little more timeless quality than just emulating the ‘60s. Most of the songs have quite contemporary subject matter. The songs are about different things and go in more directions than that. I don’t want the songs to sound like they were made 35 years ago.