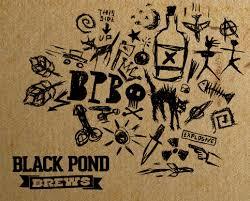 Next to farmland in the tiny village of Dayville, BLACK POND BREWS currently occupies a red brick-fronted warehouse with a white brick rear entrance and plastic-benched back porch. Named after a local Woodstock, Connecticut party spot, its original pub was in nearby Killington. The new space offers 500% more capacity for the increased beer volume now produced.

Co-owners Mike Tweed and Coby Smith got together in 2010 and soon won a contest with their Machu Pichu Jalapeno Saison. By 2014, they guided a popular local taproom and got serious about expanding operations, moving the tap house in 2021.

My wife and I tried all six available draughts on our March ’22 Sunday lunchtime stopover.