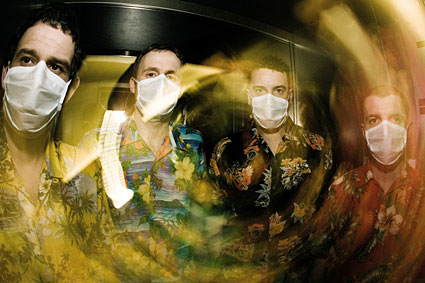 FOREWORD: The attacks on the World Trade Center not only ruined my beer book deal with office-damaged Avalon Publications, but forced up-and-coming Liverpool band Clinic to postpone a live date. On the rescheduled date a month later, the surgically masked loons truly kicked ass at Bowery Ballroom. Though they never caught on in a big way, the resourceful Clinic continue to churn out albums and hit the road. ‘02s Walking With Thee outdid the bands’ debut and ‘04s Winchester Cathedral gave hope for bigger club dates. ‘06s Visitations found ‘em in fine form but I never got serviced with ‘08s Do It!

Formed in ‘97 by vocalist Ade Blackburn and guitarist Hartley, then quickly fortified with the addition of percussionist Carl Turney and bassist Brian Campbell, Liverpool-based Clinic spike cinematic lo-fi garage-psychedelia with a collage of jazzed up funk, dub reggae, and punk vagaries. Leaning on rock’s past for inspiration and ideas, but breaking new ground with a truly unique stylistic mesh, this art-damaged British quartet enjoys triggering different audience reactions by being perfectly confusing. Just as some of their ambiguous song titles can’t quite be pinned down, Clinic manage to flaunt kitschy eccentricities in an interesting, wholly accessible, yet equally obtuse manner.

A self-released ‘97 debut single humorously taunting U.K. media-hype, “IPC Sub-Editors Dictate Our Youth” secured Clinic’s position as one of England’s most profound new combos, leading to the ‘98 follow-ups “Cement Mixer” and the Velvet Underground/ Suicide-influenced “Monkey On My Back.” 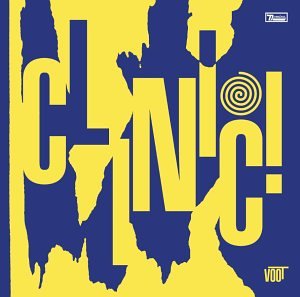 I spoke to Turney over the phone a few days after their first U.S. tour began in Boston. We were to have met at Hoboken’s Maxwells prior to a show, but the unjust World Trade Center terrorist attacks took care of that.

AW: Though your band may be from Liverpool, you stave off Beatles and Echo & the Bunnymen comparisons by going off on a more psych-garage tangent.

CARL TURNEY: We distance ourselves from being completely retro by drawing from unusual sources and going one step forward. Hopefully, it’s something new.

That’s it. It comes from Augustus Pablo and Jamaican influences like that. We like the actual effect of the instrument. It jumps out in a way you wouldn’t normally expect to hear on a record. We take influences and distort them so there’s no identical reference. We think a lot of the current guitar stuff is a bit cliché now so we try to put a twist on things. We try to be inventive to keep your ear fresh.

“C.Q.” reminded me of the snotty ‘70s punk X-Ray Spex once dabbled in.

It’s a crazy ragtime shuffle with a bit of sirens at the beginning. There’s a punk-jazz mixture as well. We have broad tastes in music. We read about what records influenced our favorite artists, then delve deeper. Shangri-Las records and Phil Spector’s Wall Of Sound broadened our listening scope and suddenly we realized there’s an enormous amount of records we don’t own that have influenced people we like.

Was your family into rock music?

My parents listened to tame commercial ‘60s music like the Beatles. But I branched out to the Velvet Underground and ignored the pop thing. We’ve been listening to the Nuggets collection. And “2nd Foot Stomp” is a bit more New Orleans-type marching band sloppiness with reverb added for that psychedelic effect.%0