Since perusing CRICKET HILL BREWERY a few times in 2011, I finally got a chance to revisit while picking up a compressor across the street from the rustic warehouse pub.

During a friendly springtime ’18 afternoon journey, I got to experience the newly renovated pale green-walled, cement -floored, duct-exposed space. Besides the bigger bottling line, there was a new wooden serving station with twelve taps, twelve stools and a prominent blackboard beer list. Plus, five stooled tables adorned the interior and a few plastic furnishings outside allowed for picnics.

Onboard as brewer for the last few years, Mark Tilley (formerly of Long Trail Brewery in Vermont)

Before heading out, grabbed a four-pack of Bourbon-aged Jersey Devil Imperial Red Ale and a growler of exquisite Bourbon-aged Doppelbock (reviewed fully in Beer Index). 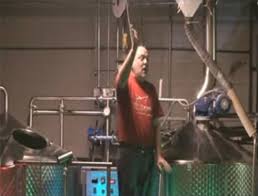