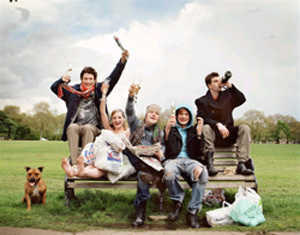 FOREWORD: In 2004, Scotland’s Dogs Die In Hot Cars released kaleidoscopic ‘80s-vintage stimulator, Please Describe Yourself. Things looked up. But internal squabbling lead to a breakup before a second album could be completed. Nevertheless, there’s still hope they’ll reconcile or hire some new members. This article originally appeared in Aquarian Weekly.

True, singer-guitarist Craig MacIntosh’s bari-tenor flights, hiccuped phrasing and fidgety whimsicality recall XTC front man Andy Partridge when he’s being deceivingly apprehensive on opener “I Only Love You Cause I Have To,” but his dry humor and nifty 6-string hooks readily draw the listener in without nostalgic reservation.

“I’ve known our drummer (Laurence Davey) and guitarist (Gary Smith) since I was eight years old,” bassist Lee Worrall says prior to performing their last U.S. tour date at Hollywood’s Avalon Theatre along with newest buddies, French noir co-headliners Phoenix. “We met Craig when we were twelve and started making some noise with his high pitch voice up-front. He writes the lyrics and we come up with musical ideas on computer, jam with it, pull it apart, and put it back together.”

“You’ve got to have a sense of humor,” Worrall realizes. “It’s been ten years of serious shoe gazing in the Glasgow scene. We wanted to do something more upbeat you can dance to instead of staring at your shoes. Craig likes to argue with himself when he’s writing. He’s not preachy. But most artists lyrics are shit.”

It’s easy to take the titular Please Describe Yourself as a smug mock aimed towards mainstream British press bastions New Musical Express and Melody Maker, ragtag media blitzed trendsetters that have the tendency to narrowly define multiple genres for corporate sales purposes. But that’d only partially explain its derivation.

Worrall comments, “It seemed appropriate on many levels. It was written about living in the same house together and watching people on a t.v. show with a camera in their face sitting in a booth who’d describe themselves in five words or less – ‘happy go lucky’ – they’d all say exactly the same thing. No one ever said, ‘I’m manic depressive’ or ‘I’ve got a tiny penis’ or ‘I killed someone once.’ Also, we had a B-side using that title. So that’s how the title came about.”

As for the weirdly elongated precautionary Dogs Die In Hot Cars moniker these friendly Scots picked to click, he says, “We used to make up fake stories of its origin. The truth is my dad saw it on the back of a car and thought it was the perfect name. It looks good in print, on tee shirts, and always sparks a reaction.”

Joyously resonating “Godhopping” may not deal directly with the Almighty, but its tart sentiment depicts a hint of animosity tossed at flaky spiritual wavering. Yet it’ll definitely put a hop in your step and some sass in your ass.

“It’s got all these obscure words in Mrs. Byrne’s dictionary that Craig was reading while taking a shit,” Worrall notes sans sarcasm. “The theme of changing your religion to fit with the times underlies, out of context, how these people behave.”

Frequently, the choppy rhythms suggest reggae or ska beats, but Worrall dismisses such whimsical thoughts as hasty. “It doesn’t sway us more so than anything else. I think the Police, especially Stewart Copeland, who used reggae styling, is one of the best drummers. We’re into their early stuff. Red Hot Chili Peppers we respect. The influences on the rhythm affects us as we’re doing three-hour funky jams.”

“They’ve done so much different stuff,” he adds. “We had a bunch of producers interested, but we weren’t basing it on their track record. We met Clive and Alan after going in the studio to do ‘04s Man Bites Man EP. We did a track to see if we could get along. The songs were already there and the structures and ideas we had were on the same wavelength with them. When we made the album, we’d grown pretty close and they had a good angle. I only wish we had a U.K. record company that’d put it out on vinyl. It’d be a lot more satisfying listening to it on 12-inch.”

“We’ve had a portable studio to chuck ideas into a laptop. We’ll be flying home tomorrow for a week off. Then, we’ll head to Australia for a small tour and disappear during the summer to put together our second album,” Worrall infers. “But we have no clue what it’ll sound like.”

Do annoying comparisons with XTC bother the capable combo?

“We realize now we come from a familiar place. But we had no conception of them at the beginning. English Settlement and Drums & Wires (are touchstones). At least they’re not comparing us to shit bands. Instead, it’s the Proclaimers and Talking Heads.”