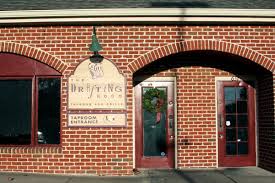 Located at Exton’s Colonial 100 strip mall in a glass-windowed red brick edifice, The Drafting Room also operates a second successful pub in nearby Spring House. Serving fine Americana fare alongside well-chosen wines and spirits, both spots cater to families, local businessmen and beer geeks equally. At Exton, plentiful left side dining is available in two rooms across from the quaint 12-seat marble-topped bar at the far right (with 3 TV’s).

During my initial January ’14 visit, I passed up Sunday brunch for dinner, finding three previously untried draught beers from Pennsylvania Maryland and Illinois at my afternoon session. Though only 13 tap handles (and one hand-pulled cask condition station) are currently on hand, there’s a large cooler with 100-plus craft beers for on-site and off-site consumption plus 70-plus single malt Scotches.

After getting my daughter at Philly airport from joyful Jamaican jaunt, my wife and I came back for dinner. And we wouldn’t be disappointed. I chowed down chicken wings and delicious Turkey Melt (on pecan raisin bread with aged Swiss cheese, peach lager jam, arugula and sweet potato fries) while my other half enjoyed Warm Tuscan Dip (mozzarella cheese, sun-dried tomatos, roasted garlic, artichokes and celery).