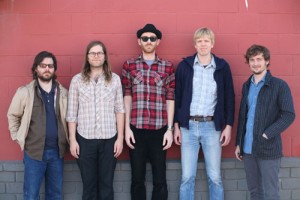 Though born in Lake Michigan port town, Kenosha, Wisconsin, home of genius movie director Orson Welles, multi-instrumentalist Eric Johnson grew up in expansive Chicago suburb, Naperville, where he listened to my alma maters’ college station, WONC-FM. So it’s intriguingly heartening to find the Fruit Bats leader claiming to be very enlightened by North Central College’s somewhat esoteric evening radio programming, especially since I once toiled there as music director way back in ‘78 when Captain Blotter, Doctor Quaalude, and Professor Amphetamine ruled the airwaves.

“I definitely found out about alternative music from WONC. They’d play b-sides and I learned to enjoy offbeat stuff like Captain Beefheart. They played weird cool tracks and had a late night psychedelic hour,” Johnson concedes. “My friend Steve and I would call straight through to the d.j.’s to make requests. We’d disguise our voices and use different names, not to make crank calls, but simply to get songs played on the air.”

“Of course, discovering Velvet Underground was a landmark moment. My friends’ older brother had Loaded,” he admits.

“Califone made artier pop with drowsier droning,” Johnson smirks. “I’d started the Fruit Bats beforehand (as a sidebar to I Rowboat), but toured with Califone and guested on an album. But I never wrote a single note for them. I was never really a force or full time member. Tim and I are different musically. He takes pretty ideas and fucks them up and I do the opposite. I take twisted ideas and pretty them up. The songs come from exactly the same place with a totally antithetical means to an end.”

Though a vocal resemblance to Beach Boys legend Brian Wilson seemingly haunts Johnson’s muse, he downplays the connection. Yet the beautifully lush harmonious backdrop informing “A Bit Of Wind” (from ‘03s Mouthfuls) truly does simulate the Californian surf-rockers sensibility.

He yields, “I’ve got compared to Brian just like my friend James Mercer of the Shins has, but I’m not much into the Beach Boys. However, if you sing in the high tenor range like we do and write melodious songs, the analogy gets made.”

Instead, Johnson confirms having an affinity for similarly surreal moody contemporary combos the Flaming Lips, Eels, and Grandaddy.

“Yeah,” he corroborates. “Mercury Rev, too. They all do this grandiose Classical-informed pop usually with high vocals. I don’t mind being compared to them. I love the Flaming Lips, one of my favorite modern era bands. My very last show with Califone we opened for them. I got to meet leader Wayne Coyne. I was actually star-struck by him.”

On the Fruit Bats gorgeous second album, Mouthfuls, a majestic pulchritude and celestial ebullience detail the comely lullaby-like folk-pop pulp. Reflective acoustic-piano contemplation “Rainbow Sign” sets the stage with its creamy narcotic flow. But the sentiments put forth often deal with love-struck pain and anguish in the wake of relationship turmoil as per the spindly 6-string banjo-aided wisp, “Seaweed,” which tenders the serrated line, ‘If I broke my jaw for you I’d find a bloody tooth and rip it out.’ Quite strikingly, the questioningly confessional closing “When U Love Somebody,” a duet with then-partner Gillian Lisee (bass-keys-mandolin), proved to be the Fruit Bats most accessible memento.

Picked up by prestigious indie enterprise, Sub Pop Records, Johnson then moved his revolving troupe out to Seattle’s rainy grunge haven March ‘05, determined to attract a wider audience. While Echolocation only managed to sell 2,800 copies and its follow-up, a mere 10,000 units, the Fruit Bats nevertheless got to be known as ‘that Chicago band that seems more successful than they are.’ Hip college discjockeys, underground press, and boutique record stores hailed the band, but fame and fortune were out of reach.

“We’re still poor with day jobs,” he maintains. “I do craft services. I’m an all day on-set caterer for film sets, television commercials, and shows. They have lots of money to throw around to make snacks. In Chicago, they have a couple studios. The new Batman movie came through town recently. But it’s mostly commercials that are cushy because they have large ad agencies for Nike and Mc Donald’s, big old juggernauts.”

“Lennon’s Plastic Ono Band is a huge record for me. But on “TV Waves,” I ripped off prog-rockers Genesis. I stole the feel from “Carpet Crawler” from The Lamb Lies Down On Broadway,” he divulges, absent-mindedly failing to convey that Mouthfuls’ “Magic Hour” likewise mentions a ‘carpet crawler.’

He offers, “I’d become acquainted with Isaac through Califone. He’s a great contemporary songwriter. Just because he’s not holding an acoustic guitar sitting down, people don’t think of him as a songwriter. But as a rock musician, he makes the best lyrics for a platinum selling artist.”

Assuredly, Johnson’s warm meteorological proclivities shine brightly in spite of some disparaging lyrical vignettes. Though shooting for a darker tone than Spelled In Bones ultimately consumed, he wasn’t necessarily looking to make a defiantly bolder statement.

“I’d like to do another 4-track record. I have some songs on tape in a shoebox and some were on Tragedy Plus Time, a limited edition ’04 EP. I want to do simple rock – two guitars, bass, and drums. We’ve been such an eclectic band putting every instrument possible on every song. There’s nowhere to go but backwards unless we play with the Chicago Symphony Orchestra.”