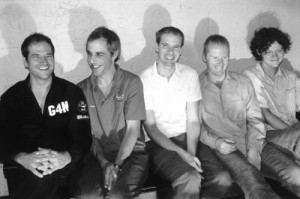 FOREWORD: I have no clue what happened to the Glands, whose self-titled ’01 album proved to be scruffily charming in a non-threatening honky tonk sorta way. Capricorn Records (home of the Allman Brothers catalogue) must’ve thought the Glands had a decent chance at AOR radio. I enjoyed the hell out of their 50-minute live set on an early Satuday evening at a discreet lower Manhattan club (prior to going to Katz’s deli and chowing down a fatty pastrami on rye with long-time pal, Al Gutierrez). I also caught them at Knitting Factory weeks before (as described below). But alas, I’ve spent fifteen minutes internet surfing and I can’t find a damn thing about this bands’  whereabouts nowadays.

“Bar None released our debut, Double Thriller. That one came off lo-fi, but was actually recorded hi-fi,” good humored, self-deprecating lead singer/ guitarist Ross Shapiro claims as we plow a few brews backstage at Knitting Factory prior to The Glands well received 45 minute set. “It came out sounding weaker, but this album is a bit more polished. There was a little more thought involved. Some of it was recorded live in the studio as a five piece. We attempted things on the first album that didn’t work.”

Meshing retro-rock mannerisms with thrice-removed blues and a smidgen of moody rural escapism, The Glands’ crooked, unkempt swagger seems to emulate from some long lost post-Beatles stoner daze. Yet some subtle modern gestures creep into the mix.

For openers, “Livin’ Was Easy” finds Shapiro drawling and whining like Pavement’s Steve Malkmus over a purposely warped slide guitar arrangement that begs comparisons to Beck’s bluesier, less popular stuff. Next, “When I Laugh” slips into hazy, non-specific folk-blues much the same way England’s Gomez does. While it could be argued that “Swim” recalls early ‘70s one-shot Thunderclap Newman, a better guess would suggest it’s closer in ‘feel’ to fellow tour mates Elf Power.

In fact, they bring it all back home on the go-for-broke “Work It Out,” reclaiming some of the amateurish spirit and unfinished backwoods rawk of vintage REM.

Though each song flows perfectly into the next, track placement is apparently a point of contention amongst band members.

“It’s always a battle between us. They always say put the best three songs first, but on the debut, we wanted to start with an instrumental and Bar None made us use “Two Dollar Wine.” They thought it sounded like a hit. It’s got wah-wah guitar and keyboard and a hacked-up, busy bassline,” Shapiro inquires.

Indeed, the corrosive “Two Dollar Wine” proves to be a crowd fave half an hour later when they entertain a sold out crowd opening for dynamic Elephant 6 collective, Elf Power. Both bands share an affinity for ‘60s rock and popular music in general.

“We just listened to the Byrds’ Untitled record in our van today. Three-fourths of it is live,” Shapiro maintains. “I probably listen to the same things any kid my age did while growing up. First, AM radio before I had a stereo. Then, when you’re seventeen, you just emulate The Clash. But by the time we started recording, I was a bit older. I’m a late bloomer. I only started writing songs about five years ago.”

It seems as if multi-faceted engineer/ musician Andy Baker has now become an integral part of The Glands lineup. On this tour, he’s playing bass (taking the place of Craig Mc Quiston) alongside guitarist Doug Stanley, keyboardist Neil Golden, and drummer Joe Rowe.

Known throughout Athens as owner of the premier local studio, Baker learned to play guitar before heading to high school. “Then, I found out I wanted to do recording. I started doing live sound in my hometown, When a friend of mine moved to Athens to do music, I got a four-track. There’s so many bands in Athens that I learned to use it as I went along.”

Shapiro adds, “It’s such a closely knit community which supports its bands. There are no critics around Athens, so people come in from Alabama and some small podunk towns.”

When asked about production influences, Baker offers, “I actually like Steve Albini’s recordings a lot. I like a roomy sound instead of an ‘80s production where it’s really dry with fake reverb. I like a natural drum sound.”

Baker joined The Glands permanently when Mc Quiston was leaving. But it’s also worth noting that he currently resides with Shapiro.

Through a smirky smile, the otherwise reserved Baker quips, “Out of all the bands I record, I like The Glands best. That’s why I joined them.”