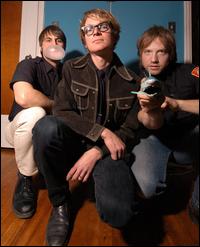 FOREWORD: The Hentchmen were around way before the White Stripes made it cool to be Detroit rockers again. Hell. Jack White even recorded with them early on. Yet except for an ‘08 live album with the aforementioned White, the Hentchmen have kept a low profile. As of 2009, ‘04s Form Follows Function remains their latest studio work.

Detroit’s fertile garage rock scene detonated nationally when dynamic duo the White Stripes moved a million copies of ‘01s alarming tempest White Blood Cells. But its roots could be traced directly back to the Hentchmen and the Gories, whose early ‘90s gigs reinvigorated the same sloppy sweat-drenched excitement distortion-packed hard rocking milestones Iggy & the Stooges’ Raw Power and MC5’s Kick Out The Jams captured during the late ‘60s for nearby Ann Arbor.

Hentchmen leader Volare shares, “We thought it was difficult to form a band until me and Tim played in a ska band after my dad taught me keyboard chords. We tinkered with that. Tim had played sax in a marching band, then learned guitar. I bought a Farfisa in ’91, got into the Animals and Paul Revere & the Raiders, and connected with the organ.”

“We’d had 45’s on different labels, but when the White Stripes built up their garage cult following, it helped open the doors and everything exploded,” Volare inquires. “We started doing cassette 4-track demos and then Norton Records signed us. That was long before the White Stripes made it. Our first three recordings were real crude lo-fi Radio Shack microphone stuff. It was fun. The energy is all there, but we didn’t go into a real studio until the last Norton album, (‘02s much improved) Three Times Infinity. We tried to make it more interesting for ourselves. Jim Diamond (famed producer) didn’t have a piano, so we didn’t use one on that record.” 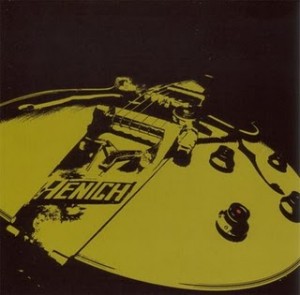 “The new studio we used had a piano. I’ve experimented with all types of keyboards. I’m playing lots of bass keys as accompaniment to Farfisa and various organs,” he maintains prior to avowing, “My dad was a pianist, but didn’t like rock. I grew up listening to Easy Listening ‘70s artists like the Doobie Brothers, Stevie Wonder, and George Benson. My dad was into Show tunes, contemporary Jazz, and Stephen Sondheim. When I began listening to ‘80s rock radio, my parents weren’t keen on that. But I was obsessed with it. I went on a different path than them when I discovered the Beatles and Rolling Stones. My parents liked them as kids but outgrew it. My mom leans more towards Luther Vandross R & B.”

It should be noted that during ‘98, the Hentchmen collaborated with pre-fame White Stripes frontman Jack White on mini-LP Hentch-Forth.

Volare recalls, “Jack and I were pals back then. He sat in. We had him play bass on that recording to make it sound bigger. It was still lo-fi. It wasn’t until Infinity when we began to crack down. Our friend, Dave, formed Italy Records. We all bowled together. So he put out a Hentchmen/ Jack White single with some British Invasion covers.”

For a short spell, the Hentchmen teemed with guitarist Greg Siemasz (famed Motown discjockey) as the Lolitas.

“We were a novelty act. We played proms at the Gold Dollar, a legendary joint in Cass Corridor. We hated our proms so we wanted to perform a real rock and roll show like we should’ve had. All the bands in town formed fake prom bands. Ours had my ex, Shelby Murphy, and Deborah, Tim’s wife. They screamed. We did punk covers for three shows. The funny thing is, we recorded one track on an Arthur Alexander tribute for a French label.”