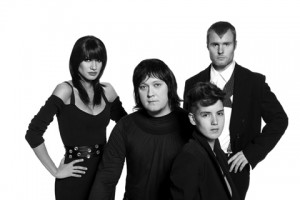 Butler surmises, “I was writing in an academic setting for personal fulfillment. But this is the first time I released music I wrote. The Classical pieces I wrote at age twelve are probably in my mother’s Denver storage bin. They were done in teen handwriting as dear, sweet romantic music.”

Before putting together Hercules And Love Affair, Butler gained a solid reputation as one of Denver’s most respected club DJ’s, experimenting with synthesizers and getting fully into dance music. Although he still enjoyed the nightlife, he temporarily shifted focus away from the discotheques and back towards classical arts during his tenure at Manhattan’s prestigious Sarah Lawrence College.

He adds, “I’ve also explored some minimalist art music in the past two years and I’m interested in that as well as softer music styles. Probably some of that will surface on record sooner or later.” 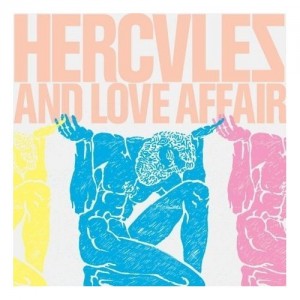 Butler reflects, “Going into the studio with Antony, we both loved Alison Moyet and that type of angelic singing. There’s so much pain and so many Blues in there. Alison Moyet, Kate Bush, Elisabeth Fraser of the Cocteau Twins, and even Sinead O’Connor have strong female voices – a gutsy soulful quality. I was excited to work with Nomi. She delivers the words like a more traditional Rhythm & Blues diva.”

A large coterie of house music denizens sniffed out the 12″ version of exotic electromagnetic mantra, “Classique #2,” prior to it being featured in long-play form. On it, Foxman infrequently inquires ‘do you really want me?’ in a recurring sultry soprano left floating inside the heavily cadenced beat-driven theatrics.

“When I went to make the record, I was interested in the words Classical and classic; classic dance music; a canon of dance. I looked to the past thirty years and pinpointed the music that was classic. That got coupled and paired with all this classical imagery. Call it Classical Grease,” he snickers. “There were all these long-named bands in the ‘70s – Crown Heights Affair and Love Unlimited Orchestra. Similarly, I thought Hercules And Love Affair had a nice ring to it. It’s referencing the mythological character Hercules, the one who’d traveled with Jason & the Argonauts. I just wanted to come up with a name that was evocative of that and rooted in the same story and meant to be something bigger.”

Benefiting greatly from his past occupation as a noteworthy participant in the thriving ‘90s Denver dance scene, Butler seemed destined to carved out his own retro-fashioned niche. Wholly appreciative of the trendy cross-pollinated bicoastal sounds other contemporaries shared, he then tried to combine these styles in a fascinatingly vogue manner while serving as a teen DJ living just east of the Rocky Mountains.

“It was like West Coast rave and the warehouse scene relating to Chicago and Minneapolis merging. They all had interesting nightlife,” he recalls. “Denver attracted West Coast DJ’s like (revered house legend) Doc Martin. Chicago’s house music scene came through. We were perfectly situated.”

Butler’s ever-changing aggregate of touring members provided flexibility in the past, but he believes future creative endeavors may be done with a stabilized lineup. He thinks some people will stay, others leave, though he’s not specific. But he insists there’ll be a freedom in terms of players and music itself. Such autonomy draws parallels with distinguished drum ‘n bass assemblage Roni Size & Reprazent, whose peerless ’97 album, New Forms, was a monumental achievement perhaps only one ‘jungle’ step removed from Hercules’ less funky Love Affair. In fact, Butler confesses having a soft spot for analogous Bristol-based trip-hop combos such as Massive Attack and Portishead.

Whether playing orchestral director on horn-speckled Philly soul-derived instrumental, “Hercules Theme,” or lending his monotone half-spoken come-hither baritone to alluring reverie, “This Is My Love,” Butler’s constantly in charge of Hercules And Love Affair’s sizzling eponymous entree. But he’s not afraid to shine the spotlight on an equally impressive array of comrades. On top of those mentioned, it’d be difficult to dismiss co-producer Tim Goldsworthy, another New York City immigrant, brought onboard as drum programmer. A renowned British DJ, Goldsworthy has lent his percussive skills to (DFA Records co-founder) James Murphy’s awesome LCD Soundsystem projects as well as James Lavelle’s alien cinematic crew UNKLE.

Yet Butler shrugs off the thought of any thematic conception being put in place for Hercules entirety.

“I wrote a lot of the pieces isolated from each other,” he digresses. “But just the fact I’m penning the lyrics gives it a thematic subtext. However, some people said the last part of the LP dragged.”

While the easier-to-grasp hook-filled tunes strengthening Hercules front load score higher than the gratuitously noir-ish backend retreats, the expansive retro-futuristic experimental jams at album’s end do at least create an irrepressible rudimentary groove. Still, it’s hard not to be more impressed with the dazzling three-four punch of “You Belong” and “Athene.” The former features Nomi’s fluctuant scale-bending vocal scheme weaving in and out of a syncopated rhythm and the latter finds Foxman, setback in the mix, simmering invariably through a pleasingly percolating percussive pulse.

It’d be cool if Hercules & Love Affair hooked up with Heloise & the Savoir Faire, another ace New York City retro-dance combo. Both wordily designated outfits not only have an accessible dance rock tangent, but also a link to flaxen post-punk idol, Deborah Harry (of Blondie fame), who rapped on a few Heloise tracks and invited Nomi to sing backup on her latest solo album. So let’s hope for a future Hercules-Heloise-Harry midnight gala. That’d be special enough for any Greek God to venture down from Mount Olympus and attend. Until then…