FOREWORD: I interviewed conversationalist folk satirist, Jill Sobule, at the old Paramus Picture Show, where she was headlining to support ‘04s Underdog Victorious. She had received a smidgen of aboveground fame with flirtatious lesbian gag, “I Kissed A Girl,” nearly a decade earlier. And she knew my friend, Phil Calitre, since they both attended Colorado University. In ’09, Sobule got online fans to raise thousands for the recording of California Years.

Blessed and cursed by having a hit single with ‘95s kitsch-y sapphic gimmick, “I Kissed A Girl,” Denver-bred, Brooklyn-based singer-songwriter Jill Sobule now commands a sturdy grassroots cult following. Going from a Colorado University street busker to reluctant faddish pop starlet to furtive folk-frolicked sage has been an arduous trip for this giddily satiric blonde pixie. She battled an eating disorder and despair along the way, finding temporary relief as lead guitarist in British post-punk legend Lloyd Cole’s Negatives before re-establishing herself as a solo force with ‘00s resplendent Pink Pearl and its reminiscently kaleidoscopic follow-up, ‘04s ironically titled Underdog Victorious. 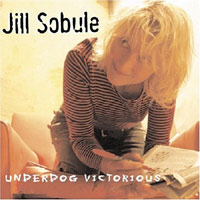 Between ticklish tunes, Sobule offered amusing anecdotes that cracked up the audience. She boasted that her autographed CD would bring good money on E Bay when she assassinates someone important, then roasted Bush crony Condelisa Rice for being only the second most popular St. Mary’s Academy graduate – behind her. Several shrewd remarks about two misguided Alabama girls whose lives were supposedly changed by the absurdist lesbian yarn “I Kissed A Girl” were belly busting. What a pisser! Anyone with an underused funny bone must witness this elfin lass live.

JILL SOBULE: I had a brother seven years older than me. He had ‘the’ rock band in town. My parents were the nice ones who’d let them rehearse in the basement. So I had this rock influence. They played Small Faces and English rock. He turned me on to singer-songwriters like Dylan and John Prine. My parents had all these bossa nova records by Stan Getz and Jobim. Later on, I went to a highly innovative school in the ‘70s and loved R & B. One of the first singles I had was “ABC” by Jackson 5.

How have you grown as a writer-musician since ‘90s promising synth-layered debut, Things Here Are Different?

JILL: I’ve meshed my personality with my music better now. Back then, I was trying to be this maudlin singer-songwriter. Just recently I was able to listen to my debut. There’s some nice things on it, but it was a tough experience working with (producer) Todd Rundgren. I love him and his work, but it was my first time in the studio. I was totally insecure being with an icon. He doesn’t have the best bedside manners. Back then, I’d sing a song and he’d say, ‘Alright that’s enough. Let’s move on to the next one.’ That would be an arrow through my heart. His girlfriend would say, ‘That means he likes it.’

JILL: I thought there was something about this record that reflected back. Just using that Chicago loop. And “Jetpack” is very Nilsson-like. I was sampling goofy stuff and thought “Saturday In The Park” is the most uncool sample ever. But I love it! My lyrics were so evocative of that time I thought I’d write a story of being at the battle of the bands doing mushrooms. Those were more innocent times. I remember going to the foot of the Evergreen Mountains in Colorado and there’d be high school battles of bands. It was a great event. I never played in any of them and was bummed out, but I played in my junior high stage band and we won state and I think it was due to my solo on Deodato’s “2001.” I was like 4 foot 1. I borrowed my brother’s Marshall amp and had wah-wah and distortion pedals. I wanted to be a li’l rocker.

On the title track, a schoolyard lament, you mention historic Manhattan dive, Max’s Kansas City, and the New York Dolls. Were its lyrics referring to transsexual punk Jayne County?

JILL: I was thinking of this misfit kid, which I was. While my friends were liking Jackson 5, I was starting to enjoy what I thought was underground FM radio. I remember getting these magazines with Iggy Pop and David Bowie. But I was stuck in Denver.

JILL: On Pink Pearl, I talked about (child molester) Mary Kay Laterneau. So I always had these tabloid characters I somehow laugh at and am fascinated by. “Joey’s” the Greek tragedy of the record. She could have had it all but fucked it up. I still have the idea of doing a concept record, Tabloid Music. Why are we interested in these stories? Somehow we like to see the great fall or how we relate to them.

The sedate serenity of “Tel Aviv” has the casual calmness of Dan Fogelberg’s otherwise repugnant “Longer.” Lyrically, it seems like weird tabloid umbrage.

JILL: “Tel Aviv” is a semi-imaginary tale I got from the newspaper. That may have been a frontline BBC story about prostitutes from ex-Soviet Union countries coming to Israel thinking they’d get a job but found forced slavery.

The unlisted closing song, a country bop lark, is perfect for radio.

JILL: That’s “I Saw A Cop.” I wish I put the title on the album because people want to hear it. That song’s just an excuse to use Angie Dickinson’s name.

She’s another blonde bombshell a la Joey Heatherton. What about “Cinnamon Park”?

JILL: Some conservative Triple A stations began playing “Cinnamon Park” but got complaints because, first of all, people don’t have a sense of humor. Maybe they were older. They were going, ‘she’s ripping off Chicago.’

On the Warren Zevon tribute album, Enjoy Every Sandwich, you cover “Don’t Let Us Get Sick.”

JILL: I did two tours with Warren. I loved that song from Life’ll Kill Ya. I wanted to do it before he got sick. He became a mentor and pal. I remember people warning me he was gonna be real curmudgeonly. But he was just a doll.

What’s with Underdog Victorious’ Snoop Dogg spoof design on the back cover?

JILL: It was just an underdog. I went with an artsy fartsy photographer. Except I don’t have the naked women and the breasts on it. I respect the Snoop.

What was it like being in Lloyd Cole’s touring band?

JILL: It was my first time since high school playing in someone else’s band. We toured for two years before I made Pink Pearl. I met Lloyd at a songwriter thing in Ireland. He said, ‘I really like your guitar playing. Have you ever thought about being in a band?’ I thought, ‘OK. I got nothing better to do.’ It was a fantastic experience and for the first time in years I had to woodshed, learn all his Commotion songs, too. I had to learn (6-string aficionado) Robert Quine’s parts. I remember Quine saying, ‘I don’t like any of those guitar parts, but you do it well.’ I was good at the noisy, slinky stuff. That was great being a side person serving someone else. I love how Lloyd comes across as a cold, distant, handsome Englishman on his albums, but he’s the complete opposite: goofy, sweet, and warm as a teddy bear – which makes him all the better.

You’ve worked off-Broadway in the past.

JILL: I did a musical that played at the Summer Playhouse Festival, Prozac & Platypus. I did the music. It was fun. The playwright wanted to find someone who was more into rock and pop. She wrote the lyrics so it was easy. I also played a struggling singer-songwriter, what a stretch, in Mind The Gap at Angelica Theatre. Showtime may use it. I never acted, but I knew how to play that part.

JILL: It’s got “Angel Asshole” on it. That’s a sympathetic song for breaker-uppers. (laughter) No one’s taken that angle.