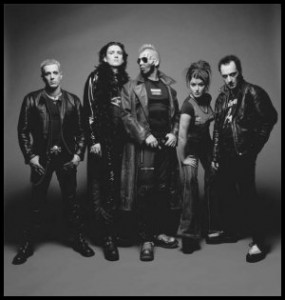 FOREWORD: KMFDM is the alias of Sascha Konietzko, who began his long-running Industrial dance rock troupe in Paris before heading to Germany – a Bavarian country they probably thought would be more receptive to such frazzled electronic machinations. Founded in 1984, KMFDM have released at least another half-dozen full-length recordings since this ’96 interview promoting Xtort. It became my first front cover story for Aquarian. For the record, my first cover story was on then-hot trio, the Presidents Of The United States Of America, for Brad Balfour’s defunct New Review Of Records, a year earlier. This article was my first front page piece for Aquarian Weekly.

Beginning with ‘86s homeland snubbing, What Do You Know Deutschland?, and ‘88s variable contemporary Industrial grab bag, Don’t Blow Your Top, KMFDM constructed a grim, pulverizing electro-dance groove which dug deeper than counterparts Depeche Mode could ever hope for.

In 1990, the remixed smorgasbord, Naïve, appeared, followed in rapid succession by ‘92s brutal Money, ‘93s compromising Angst, and ‘94s KMFDM Vs. Pig disc, Sin Sex & Salvation. Best of all, in ’95, KMFDM released the astoundingly seething razor-sharp traipse, Nihil, a restlessly anarchistic thematic contortion. But while Konietzko and Esch made strides in the US, German acceptance was relegated to a handful of dedicated fans, initiating a change of citizenship for the duo.

“Germany seemed like a dead end road for us. It was not really the place where industrial music would land on fertile ground. Nine Inch Nails are just now starting to get popular in Germany. They’re way behind. They picked up on Elvis Presley and all that ‘50s hullabaloo in the ‘60s. Then, in the ‘70s, the Beatles and Rolling Stones were finally recognized. In the early ‘80s, Germany finally accepted punk rock,” Konietzko complains. “Worst of all, every time the Germans develop something, like Can or Kraftwerk, a neverending supply of imitative crap gets put out. When techno got popular, all of a sudden there was smurf-techno and t.v. cartoon techno.”

By building an ever-increasing fan base, KMFDM solidified both its clubland status and indie rock credibility. Remixed maxi-singles, a track for the Mortal Combat movie, and remix projects for White Zombie and Living Colour helped their cause over the years. 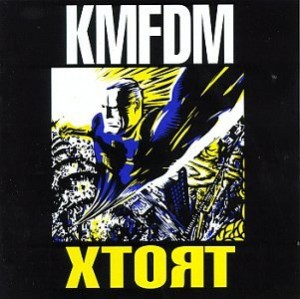 “We’ve progressed in a smooth line which leads directly to Xtort. But not at any point did we make drastic changes to let it all come together,” declares Konietzko. “I think Xtort takes a lot of chances, leaving the somewhat safe path we had been on previously. It was important to stay true to the way we view things, but also to go farther into new territory – which interested me composition-wise. Not many bands would tackle material this diverse.”

Recorded with Ministry’s William Rieflin, Revolting Cocks’ Chris Connelly, and Einsturzende Neubauten’s FM Einheit, Xtort incorporates fierce blasts of sonic aggression with self-effacing lyrical snippets. Living in Seattle, Rieflin has maintained a close friendship with Konietzko through the years, touring with KMFDM in ’89. They had always wanted to record together, but busy schedules had prevented that from happening.

As for Chris Connelly, he continues to be a chameleon figure, supporting innumerable artists.

“His Shipwrecked solo album is one of my favorites. It’s highly composed and unusual,” Konietzko explains. “Chris has always been able to keep the continuation of his musical tradition alive.”

Although the Seattle scene has produced superstars Nirvana, Soundgarden, and Pearl Jam, Konietzko says his adopted hometown lacks a local radio station that’ll tackle techno-Industrial acts. But he credits Paul Aleinikoff of noncommercial station 89.5 with keeping the hopes and dreams of obscure bands alive. He believes the public should explore different music on their own since narrowcasting continues to haunt and halt artistic development.

“All I’m saying is, think for yourself. Don’t take shit for granted. Information is power. People should be trusted to educate themselves. But in order to utilize the power of education, you’ve got to put it to work. There’s a lot more than self-mutilation and sticking needles in your arm when it comes to artistic creativity,” Konietzko maintains.

Though he says artists should probably be exempt from politics, in a literal sense, his keen awareness of worldly concerns cannot be denied. Because of the chasm created by the tacky Republican and Democratic agenda, and the relatively insignificant accomplishments therein, Konietzko prefers to remain unaligned.

“I probably lean more to the left on many issues, but it doesn’t matter. The extreme left and extreme right are relatively the same. I think politics are effectively dogmatic dinner table propaganda. The core problem is information relayed to people is false. These so-called Revolutionary Capitalists prove they cannot be trusted because they’re so full of shit. On a local level, if you empower an alderman, he usually does a good job. But nationally, we’re not ruled by the people. It’s disturbing,” he says.

Perhaps the liner notes to the re-sequenced Naïve/ Hell To Go disc best spells out Konietzko ‘s and En Esch’s belief in artistic expression and individual freedom: KMFDM stands up against patronization, glorification, and propagation of ignorance and the prohibition of any content labeled ‘unsuitable’ by authorities as dubious and questionable as PMRC or MTV.

“Nicole was my publicist. I took her on the road and found out she could do fast and furious spoken word. She needed to be forced to join me onstage because she was playing shy, saying, ‘I don’t know if I could do this.’ I picked out the highlights of her 10-minute rampage and worked them into song,” Konietzko remembers.

Infested with wry assertions such as ‘America gets the celebrities we deserve,’ the pungent lyrics to “Dogma” were written on a Saturday night when Blackman’s friends abandoned her.

“The quickest barometer to see where we’re at as a nation is to look at what posters are up on kids’ bedroom walls,” Blackman explains. “You could size up culture by the musicians and sports figures we put on a pedestal. In America, we’re even putting Richard Nixon on a stamp, even though he was impeached in a horrific manner. At least France tries to reward its cultural heroes with their stamps. America does it after they die of overdoses.”

“When we recorded “Dogma,” I took all the pop culture references out because I never wanted it to sound dated. I wanted it to be an eternal evergreen track,” Konietzko advises.

“Wax Trax Records wanted a promo-only track to pitch to radio, but I hear radio doesn’t like big female choruses. Cheryl Wilson, a famous voiceover commercial singer, helped out. It’s just dumb and catchy. But it was never geared towards commercial alternative or MTV,” Konietzko insists.

Konietzko shares, “It’s an homage to Atari Teenage Riot, a band with two guys, one girl, a couple TR90S drum machines and a bass machine. They do impressively fast 240 beat-per-minute hardcore.”

“I think overall it has a Frank Zappa quality. It’s controlled and orchestrated, but also very wild. Tower Of Power added a high caliber musicality and we had real run conducting the brass section,” Konietzko concedes.

No tour is scheduled to support Xtort. Instead, Konietzko plans to gear up for the production of heavy metal blasters, Treponem Pal, before another new KMFDM album arrives.