Residing across Newark’s sports and entertainment capital, the Prudential Center, in a formerly abandoned broken-down warehouse, the wholly exquisite EDISON ALE HOUSE has taken the downtown area by storm.

“It’s all about the execution. We want the menu to be the top-to-bottom best. We want the best sandwiches. We don’t want mediocrity. Everything’s made from scratch,” hands-on co-owner, Eddie Becker revels. “You could taste the difference. We don’t have to broadcast how good our burgers are.”

Better yet, the modular bar system allows instant access to plumbing and electricity just by pulling off the panels. Moreover, the stainless-steeled, silicon-sealed layout protects against odorous water damage to the broad-ranging bar. No stone has been left unturned.

As we down a few blueberry-pied, phenol-spiced, Graham Cracker-backed Blue Point Blueberry Ales, Becker takes me downstairs to the basement level storage area. Large new American Panel walk-in aging boxes store meats, vegetables, and kegged beers. Becker stresses the importance of fresh ingredients every step of the way. There’s even a few oil recycling bins providing “cheap money” to keep Green. But the true challenge for a new restaurant is to keep the food original, exciting, and consistent.

“Americans accept average food too much. We want to blow people away. When Dinosaur Barbecue rib joint comes in next year, that will test our resolve,” Becker says.

As we head back upstairs, I grab a seat at the bar and get ready for one of the best full course meals imaginable. A leather-branded menu with Thomas Edison gaslight insignia provides tonight’s offerings. After taking a sip from my floral-daubed, topical-fruited, bitter-hopped Flying Fish Hopfish India Pale Ale (prominently glazed by illuminating cantaloupe, melon, pineapple, peach and apricot tones), the sensational appetizers arrive.

The main course, Country Chicken, jumps off the dish with a juicily moist mouthfeel deepened by the underlying mashed potatoes and string bean/ asparagus-laden tomato sauce. Too full to try my sweet dessert follow-up, I got home this rainy eve to share the zestful strawberry-pureed, black chocolate-covered, cheesecake lollipop with my wife.

Though Becker claims it took eight months to setup the beautiful mahogany-walled mural behind the bar and there were minor delays for the prepping and permits, Edison Ale House would make the referential Thomas Edison proud.

“We set a goal to open on time and then did so,” well-mannered General Manager Tom Blume offers. “People are creatures of habit. They don’t want to drive somewhere if they could walk to a place they enjoy. There’s a comfort zone. They could get in and out quickly. A large part of our business will be lunch and happy hour. There’s a feel good fit. You could have a beer and unwind. When Disney On Ice comes through, the warm earth tones will have an inviting feel for kids. Despite 60% bar and lounge area, families with young children will feel at home on the other side of the glass partition.”

On top of everything else, at the rear is a stone-facade brick oven for reasonably priced New York-styled pizza, perfectly affordable for cash-strapped parents stuck with ridiculously high energy, insurance, and tax bills. For those in a rush, there are twelve seats at this backend hearth.

Students from nearby Rutgers-Newark University, New Jersey Institute of Technology and Seton Hall Law School have already sojourned to this highly recommended regularly. But perhaps the biggest crowds still await, as the hockey season is about to begin and the New Jersey Devils clearly will have a shot at the Stanley Cup.

“When the Devils and Rangers rivalry heats up, we’ll raise the music louder,” Blume concludes. “Besides, we’ve already, in the space of a couple weeks, got clientele coming back for more because it’s enjoyable.”

What was once a nasty beat-up eyesore I previously mocked (when hometown Ramsey High School won the state hockey tournament two years hence at the Prudential), has turned into a sufficiently sustained backyard alley across from one of America’s finest arena-sized venues. There’s no doubt Newark’s on the upswing. And Edison Ale House tops the list of places to dine and wine when perusing Jersey’s largest metropolis. 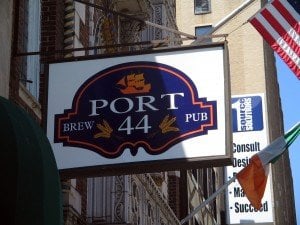 Recruited to craft newfangled libations for Port 44, Sheehan understands the local impact a brewpub could have on a community. He’s aware of Newark’s extremely diverse cultural populace and realizes each pub should have its own identity, even if it’s as multi-faceted as the Brick City’s heterogeneous community.

“To a certain extent, we wanted a nice pub feel. Prevalent use of wood décor, stone tiling, and up-front tanks add an Industrial feel. We didn’t want to be a full-blown sportsbar, but wanted to accommodate and focus on the Devils fans three blocks away at Prudential Center. So we had to have a sports appeal for the fans we anticipate hosting,” Sheehan explains as I quaff his lightest offering.

Sheehan adds, “It has the mentality and attitude of a pilsner, yet it’s top-fermented and treated as a hoppy golden ale at warmer temperatures. A sack of light caramel pils gives it a subtle sweetness you’ve perceived as crystal malts. It’s been described as lemony, attributed to a generous dose of German-hybrid Mount Hood hops.”

“That’s a very fair description,” Sheehan approves. “25 cents of every pint goes to a charity scholarship for children of injured policemen, firemen, and EMT workers.”

Still experimenting with Siren’s recipe, he divulges, “I didn’t want it to come out as hoppy, but the pleasant surprise about the system we’re using is the pronounced hop utilization. In this case, it pumped up the hops too much. I want to back off a bit to make this a truer expression of an astringent American wheat. It’s too similar to Goldfinch right now, which is going to run out. I’m a one-man show trying to catch up. So Siren’s got to pick up the slack.”

“Citric notes are a good descriptive for American hops, in general. Obviously brewed to appeal to Devils fans without plagiarizing the franchise, I like using chalkboard imagery to invoke the legendary Jersey Devil as well,” the brewmeister points out.

“This one’s closer to an American-styled stout with aggressive Centennial hops and milder coffee. Black Hole’s a foreign-styled stout, stronger (8% alcohol) with super-intense malt roast. Longy’s will continue to evolve. Flavors will mature, round out, and the rough-edged harshness will dissipate,” Sheehan says.

Anyone doubting Sheehan’s serious-minded brewing techniques should know he drove to Upstate New York to collect Catskill’s homemade wet hops, describing its character as a bit British with earthen-floral nuances.

In the near future, Sheehan hopes to craft a German doppelbock, since he owns up to being intrigued by Ayinger’s esteemed Celebrator Doppelbock and Spaten’s equally fine Optimator. Admitting he learned more in ten months visiting Europe after high school than he would’ve attending four years of college, the seasoned brewer confesses the trip was not necessarily done to ascertain ancient European brewing techniques, but instead to peruse the continent as a relative greenhorn readying for the world. Now teamed up with former Jersey public servants, Gilhooly and Feeley, the spirited trio has rescued Newark’s long-dormant brewpub scene.

Upon May 2011 reinvestigation, I found Sheehan standing at the bar alone ‘round noon and started bustin’ his balls. But he wasn’t real lonely. He was entertaining a friend he’d met going to Denver’s Great America Beerfest who’d temporarily gone upstairs to check out more of the provincial oak-furnished stone-tiled ambience.

By time I exited, several cute Seton Hall law students from down the block were celebrating graduation with lighter-bodied suds such as citric-spiced Goldfinch Ale and grapefruit-peeled dry body Siren’s Wheat while the local business crowd arrived in full force.