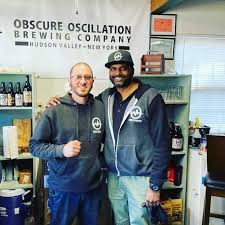 Inside the glorified garage there are twelve black wood seats at the bark top bar and a few conical fermenters towards the rear. A big TV centers the bar where three tap handles serve today’s current fare. There are bottles for sale as well.

Lovers of music and culture, ‘metafictional monks’ Chinkan and Di Camillo set out to be homebrewers during their college years. Though they both maintain day-time jobs, there’s no denying their passion for brewing. The duo’s locally resourced ingredients add an earthen barley-hop rusticity and husked grain rawness to the uniquely handcrafted elixirs.

In their late teens, Chinkan and Di Camillo acquired a palette for Belgian ales of all styles and couldn’t find anything that could satisfy their souls. During this time, there were no hazy IPA’s or NEIPAs, which they now enjoy drinking. Brewing since age 18, they had much success at local homebrewers competitions, but the idea of starting a brewery was just a dream. A decade went by with no thoughts of operating a brewery. During those 10 years, a lot of research was conducted consuming many beverages. Fast forward to 2017, the lifelong friends revisited the idea of opening up a brewery focusing on Belgian style ales. By 2018, Obscure Oscillation was getting established, receiving farm brewery licenses in April.

During September ’22, my wife and I took a trip to Obscure Oscillation for a tasty noon time slurp.