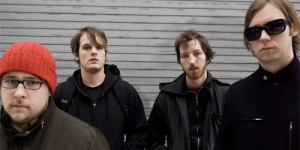 “I moved from DC to Philadelphia two years ago. Matt, who runs the small White Denim label, had a straight-up noise band, Air Conditioning, that I’d wanted to join,” Mc Guinness remembers. “But when I got in touch with him, Matt asked me to join Pissed Jeans. Everyone felt it’d work.” 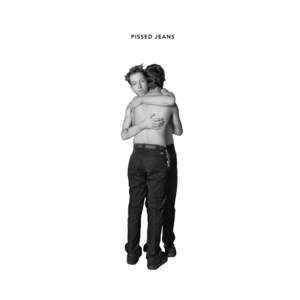 Mc Guinness remarks, “We didn’t get caught up wondering if people would like it. It’s a fucking raw punk record. Some songs were written in the studio and came together nicely. I tried to get Hope For Men on a local jukebox with lots of noisy recordings and the guy said it was too experimental.”

“That and the last track, (the bowel-grating desecration) “My Bed,” are two of the same type song.” Mc Guinness offers, before inquiring, “Is it even music? Matt’s a nine-to-fiver dealing with people constantly yelling on the phone. But you don’t have to like what you do if it allows you to do things you like. That’s even more of a ‘fuck you’ to the man.”

“People latched on to “Ice Cream” the most. It’s kind of a cult song in DC,” Mc Guinness claims. Nevertheless, he seems more enthralled by seditious Industrial gloom swoon “Jogger” and loner drone “Fantasy World” (a childhood anamnesis of pizza-eating soda-drinking impassivity). “To me, “Fantasy World” is like a freight train plowing right through. It’s a straightforward mind-boggler. There’s part of that ‘outcast making his own devises’ theme. But there’s also jealousy, hatred, and disdain, like when neighbors have a cool swimming pool and all you want is to be invited over to swim. “Jogger” was the first song written for the record. Brad took painstaking efforts to make the guitar speed up the way it did. You could compare it to a joggers heart rate.”

“My playing has always been sloppy. It’s developed, but I did it more on feeling than know-how,” Fry avers. “Over the years, it has evolved. I hate to do things twice. The songs, done live, are different. The basic structure and the fills I rip through on the fly. Some nights it’s good, sometimes, not so hot.”

“My willingness to put up with the bands’ orneriness (was important),” Mc Guinness snickers. “I’m a good performer who doesn’t put on a suit or become a different person. My dedication to music is clear and evident. I don’t force anything. I want my drums to be stripped down and basic as possible without becoming wanky – nothing flashy. The sense of morphing, changing, and evolving appeals to me.”

Fry concludes, “A lot of the stuff we do in the studio, there’s an idea laid down naturally. We may use the first take if it’s unique enough. It’s significant we don’t repeat ourselves.”