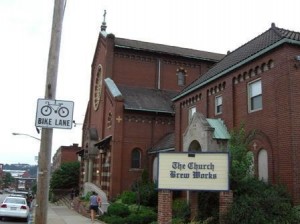 Adjacent to Pittsburgh Brewing in the Lawrenceville section was most intriguing THE CHURCH BREW WORKS. Converted from St. John’s Church to a detailed brewpub, The Church had unique altar vats, stain glass windows, Douglas fir floors, an outdoor rectory patio, and exemplary food.

At Thornburg Bridge, fine restaurant-brewery Sharp Edge had great Belgian draft selection, classy microbrews, and lavish imports. Got to try several Belgian Wits during December ’03 jaunt, but dinner was out of the question because it was so packed there was a two-hour wait. So I took family to nearby burger joint.