FOREWORD: Sure did have fun with the Poys during their ’04 Maxwells in Hoboken stopover. Lotsa drinkin’ and cavortin’ and jokin’ ‘round. Who could ever forget that annoyingly disruptive drunken bitch that insulted bassist, Melissa? That was precious. (read below) These noisy shoegazin’ Chi-town neopunks returned for ‘05s more uniform but slightly less exuberant Celebration Castle and ‘07s polished-up Turn The Lights Out. This article originally appeared in Aquarian Weekly.

Playing alongside Detroit’s finest garage bands – the Henchmen, Sights, Go, Dirtbombs, Soledad Brothers – has helped make Chicago quartet the Ponys one of ‘04s great underground discoveries. So don’t let their laid-back demeanor and genuine warmth fool you into thinking they can’t rock your world with the primitive fury, daring commotion, and steely eyed assurance of the best street punks.

Originally in dirty balls-out punk band, Guilty Pleasures, Jered learned to play drums, then guitar, as a teen, becoming infatuated with the Misfits before leading high school band the Defilers (whose white t-shirt he sports). While the Ponys wholly respect punk progenitors the Heartbreakers and Ramones, Jered and Ian (ex-Happy Supply) also share a deep affinity for Link Wray and pre-Beatles surf music.

“It’s amazing. The guitars from that period (1959-1963) are loud as fuck, blowing out the speakers for that tape-distorted surf-y sound,” Jered shares as we sit in Maxwells basement an hour preceding their fiery show.

“Dick Dale thinks he invented everything. He’s so arrogant. He thinks he taught Hendrix guitar and claims to have discovered metal,” Ian opines. “I love everyone who copied him from that era more. I like the Fender 4, Eddie & the Showmen, and Jim Messina’s first band (prior to Country-rockers Poco and ‘70s pop duo Loggins & Messina), the Jesters. It’s way heavier than anything Dick Dale did. And Link Wray had a tighter sound and more ideas. After that, I got into (raw-boned ‘80s rockers) the Milkshakes and Thee Headcoats.”

“I’ve also been influenced by Sonic Youth’s Kim Gordon and…,” Melissa reflects before disruptive solo opener, Birdbrain, whose pill-popping drunkenness matched the screeching guitar-vocal shrillness of her patience-testing set, aims this immodest tidbit at her when I suggest women in bands oft-times get short-changed: “She’s probably fucking one of the guys in the band.”

The Ponys remain mild-mannered despite the unexpected interrogation, but enjoy my innocently hurled comment about Birdbrain looking like a septuagenarian’s beautician wearing the black garbage bag that she’ll soon don onstage. 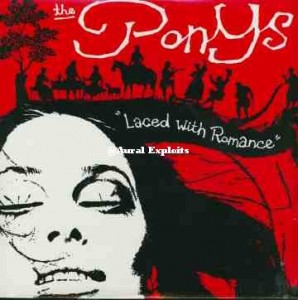 With that (un)pleasantness out of the way, we begin discussing Laced With Romance, a delectably neurotic celebration seemingly snidely snickering over serious and silly observations. Take the suicidal put-on, “Let’s Kill Ourselves,” which surges forth with such inherently gleeful exuberance humorless emo fans may mistake its jaundiced facetiousness for self-righteous mutilation. Or, better yet, the shamelessly cheeky Ian-sung “I Love You ‘Cause (You Look Like Me),” a self-absorbed vignette worthy of The Fall, which provides farcical relief stashed between the darkly bluesy early Rolling Stones pilfered “I’ll Make You A Star” and the jingled vilification, “Virus Human.”

Jered laughs at my “Sad Eyes” critique, casually offering, “Every little twangy guitar thing has been done at some point, but people grab on to that. We’re drawn to that echoey sound so that ends up being utilized.”

Despite purging emotional anxiety in the truest punk fashion, happily he still finds time to completely loosen up, as on the puckish Velvet Underground-ish parody, “Little Friends.”

“It’s about our house pets. We have a cat who pisses everywhere,” Jered explains. “I’m interested (in writing about) shit going on around me daily. I get most of my ideas from the television, crazy people walking down the street where I live, or from traveling.”

When asked how the Ponys arrangements reach fruition, Nathan interjects, “Some songs, especially lately, someone will come up with a riff and everyone finds a way around it. If we have something cool going on, Jered will start mumbling stuff to get to the essence of the song.”

In fact, Melissa gets to sing lead on a new tune they worked out, “She’s Broken,” at Maxwells this evening. Delivering blues-drenched lyrics in a ravaged manner, she recalls the urgency of a snarling Patti Smith. One of the highlights for tonight’s crammed crowd is the ascending garage rocker, “Trouble Trouble,” where Melissa’s murky organ signature invades the sticky soulful beat, rendering a psych-garage fervor mindful of the 45’s or the Greenhornes.

“Some of the early songs we hadn’t committed to the debut were more blues-based,” Jered admits. “But we wrote so much new stuff we liked that we stuck with them. We still may go back and flesh out some of those tracks. They may resurface in a different form.”

For this night’s encore, the Ponys employ the sonic “Only One,” a thrillingly spewed electroclash bash with a visceral edginess the Yeah Yeah Yeahs would recognize and enjoy. During its blustery performance, Jered does his best to wring dissonance out of his axe, bending its neck backwards on the floor and letting the distortion bounce off the nearby floor speaker. For a second, I thought he’d destroy the six-string in malevolent Pete Townshend fashion. But alas, Jered’s probably too content and well balanced to go that far.

“I like that song. It’s fun. But the whole time I’m thinking about how much radical noise I’m gonna make at the end,” Jered confesses.

As I’m leaving I hear a voice calling from behind at a distance. As I look back, lanky Jered appears amongst the fog, rain, and oak trees he’s nearly as tall as.

“I just want to thank you for coming out,” he sheepishly avows as if I was doing his eager and talented assemblage a favor.