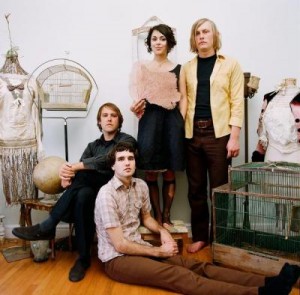 FOREWORD: Port O’Brien’s lead man, Van Pierszalowski, was spending several months each year out on a fishing boat when he wasn’t creating nautical musical tales. After this interview promoting ’08s All We Could Do Was Sing, Port O’Brien’s next release, ’09s Threadbare, would be less nautical, relying extensively on established folk perimeters. The following article originally appeared in Aquarian Weekly.

Hailing from the Raiders notorious bayside refuge, Oakland native, Van, was destined for a life at sea, though apparently not at the expense of his collaborative landlubber lass, a baker by trade. Finding summertime work aboard his father’s commercial salmon boat since childhood, Van’s nautical adventures invigorate the intriguingly plaintive folk-espoused compositions ambling through Port O’Brien, the promising collective he and Cambria inaugurated (inevitably fleshed out by fellow California denizens, bassist Caleb Nichols and drummer Joshua Barnhart).

“My parents met at Kodiak Island, Alaska, in ’69. My dad grew up in L.A. and my mom was from Seattle. They hitchhiked up there. He’s the captain and I’ve been going out on salmon trips alongside two other crew members since eighth grade,” Van shares. “One of my earliest childhood memories was the year the fishermen couldn’t work due to the Valdez oil spill. 3,000 people living in Kodiak marched down the street chanting ‘Exxon Exxon/ Clean it up!’ I was frightened not knowing what was going on.”

Now living in the more affordable San Luis Obispo town of Cayucos, a small coastal beach village approximately 100 miles south of Monterey peninsula and a three hour ride from Oakland, the friendly versified seaman says he became engrossed with angling and the arts as an impressionable teen.

Acknowledging familiar icons, the Beach Boys and Beatles, as primordial musical inspiration, Van also discloses his father’s love for peculiar funk-punks, the Talking Heads. When ocean bound, Van’s authentic anecdotes long for the shore, but safe at home on solid ground, his pathos-riddled tales relate to the sea.

This overarching dichotomy forges the overriding theme of ‘08s wondrous All We Could Do Was Sing, the full-length follow-up to stirringly formative self-produced compilation, The Wind & The Swell. A virtual day in the life exposé chronicling the heartache, seclusion, and survivalist attitude accompanying remote northern Pacific voyagers, its downcast melancholia gets heavenly sidetracked by mystic revelations only the open seas can provide.

“We like having direction in terms of sequencing – without following so strictly to restrict the sonic flow,” Van confirms. “There’s the intro, where I wake up, then eventually, I go to bed dreaming of Valdez.”

“The major difference between us is when we write songs they relate literally to being at sea, not a storyteller perspective or metaphorically like Mark Kozelek (Red House Painters/ Sun Kil Moon),” Van correlates. “However, when I’m writing on the big sea, I’m into a different vibe being in the middle of nowhere. So I write about being back in Oakland’s concrete and traffic, whereas on land, I compose all the navigational songs. It doesn’t work the other way around.”

Still, despite all the hydrographic lyrical content and freak-folk frolicking, Van claims he was involved with louder, harsher sounding bands redolent of shoe-gazed marvels, Mogwai, but ultimately influenced by grunge kingpins, Nirvana, as a high school kid. He credits the then-prevalent local Gilman Street scene for getting him into cool punk, specifically, Billy Joe Armstrong’s luminary trio.

“The band that made me wanna buy a guitar was Green Day with Dookie. Then I got into harder stuff like Fugazi and indie rock,” he divulges. “In fact, one of our rehearsal spaces had a box in a closet with 100 copies of Green Day’s debut, 1,039 Smoothed Out.”

As a developmental duo, Port O’Brien’s initial sessions had an unpremeditated sparseness. Every frail intricacy emanating from Van’s bedroom-bathroom recordings could be heard distinctly – squealed nylon chord squeaks, picked and plucked string strokes, drifting somniferous harmonies, and atonal whistling. To expound upon the variances between The Wind & The Swell and its more structured, rhythm-aided, studio-leased successor, “I Woke Up Today” preliminarily received a bare-boned one-take rendition previously designated “Simple Way.”

Of the latter, Van explains, “Cambria and I wrote the lyrics together. It came out natural. It’s a scream-along in which the anger seeps through better in a live setting. There’s a lot of wordage. It seemed all right if it just went on and on for awhile. It sums up everything – the boat, the land, and the relationship. I wrote the melodies and chords while drunk.”

Analogously, nasal-throated twilight lethargy, “In Vino Veritas,” authored by Cambria while toiling at an Alaskan-based Larsen Bay cannery, uses alcohol as figurative truth serum. Sensitively hushed edict “Will You Be There?” leaves behind any such wine-y sentiments and comes with sympathetic strings attached. Nightmarish cello-drenched dirge, “Alive For Nothing,” reconcilable as a defeatist anthem spreading looming anxiety, actually best captures the hypnotizing aquatic solitude sleepy-headed anglers endure on the high seas.

Van declares, “There’s scientific proof that the rockiness of the boat makes the brain have more vivid dreams. You sleep only a few hours at a time ‘til my dad yells ‘get the fuck out of bed!’”

Notwithstanding tough oceanic weather conditions and forlorn hardships, it’s doubtful Van will give up the fisherman’s life any time soon.

“It’s totally addicting in a weird way. You feel hopeless, helpless, and isolated. It’s like you’re going insane. There’s no phone reception, t.v., or internet. But the competitive nature with other boats gets under your skin.”

As for Port O’Brien’s future endeavors, Van concedes, “It’ll be less nautical. We have tons of songs written for the next album. Songs will be more open-ended, less specific.”