Sojourned to northwest Quimby section of Portland, December ’09, perusing environmentally friendly green-powered LUCKY LABRADOR BEER HALL (with two more pubs in nearby Hawthorne Boulevard and Capitol Highway). Using a solar thermal closed loop glycol system to power up, this former warehouse with gray frontage, maroon awnings, back patio, and spacious concrete-floored interior serves some terrific house pizzas from an open kitchen to go along with its wide array of brews.

The atmosphere was laid-back this early December ’09 afternoon and brewer Kevin King’s delectable brews were tried alongside a meaty burger (smoked sausages are also available).

As I entered Amnesia, famed Rogue brewer, John Maier, and his wife, were seated at the rustic 10-seat bar. A pleasant coincidental surprise, indeed, since I’d met the awesome brew-some twosome originally in Newport, Oregon when my wife and I stayed at one of Rogue Brewery’s cozy loft suites. We had a few laughs as I downed a few beer samples and then took off for Seattle to catch a plane home to Jersey. 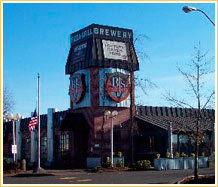 Reaching across both sides of Williamette River lies the tree-draped “City Of Roses.” Visited March ’03, Portland may have more brewpubs per acre than any American city: Alameda; Bridgeport; Lucky Labrador; Mc Menamins; Widmer Brothers. I finally got to revisit this absolute brewpub mecca again in autumn ’09 for a complete report.