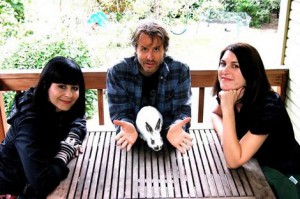 FOREWORD: Ex-husband-wife team, Quasi, deliver the tastiest fuzzed-out organ-droned orch-rock you’ll ever wanna hear. I saw them live at Maxwells and got to interview Sam Coomes to promote ‘01s enthusiastic The Sword Of God. ‘03s Hot Shit! wasn’t bad but ‘06s When The Going Gets Dark found a certain sameness creeping in. This article originally appeared in Aquarian Weekly.

Beginning with the faux-majestic put-down, “Fuck Hollywood” (linking Grandaddy to Procol Harum with its dirgey voice-keyboard fragility), The Sword Of God hits stride.

Buzzy fuzz-toned dynamo, “Genetic Science,” pitting Jesus and eternity against the motto of “a few good years are good enough for me,” comes before “The Sword Of God” impales its forceful guitars into the sternum like only the Pixies best tunes used to do. After the impromptu fun of “Seal The Deal,” jangly Rickenbacher guitar anchors the Byrdsian “From A Hole In The Ground” and Halloween-etched “Goblins & Trolls” pastes the Doors’ “Waiting For The Sun” organ pulse to Black Sabbath’s Gothic drone with fine results.

Though perhaps unknowingly or unwillingly, Quasi continues to lift cool hooky melodic riffs from the past. They dabble with ‘80s new wave via Eurythmics, Human League, and Orchestral Maneuvers In The Dark while copping fractured organ rumblings from hard rockin’ late ‘60s leftovers Mountain, Ten Years After, and Steppenwolf (though I’d imagine Coomes-Weiss would disagree with that last assessment and give credit to Edgar Winter’s White Trash instead).

The Sword Of God seems to lure you in with its playful, eclectic opening tracks before getting more serious-minded taking chances by the middle.

SAM COOMES: In a way that’s true. I don’t know if it was conceived that way. Both of us were probably in a better mood than we were for the last album. You have ups and downs. Circumstances conspire to keep you down at times. Now I’m feeling the whole range of human emotions and not just negative feelings. That’s why this album seems more varied.

There are still many downcast revelations to behold.

SAM: Yeah. But like I said, hopefully there are more aspects of emotions you feel through life.

You get sociopolitical on “Genetic Science,” pitting conservative mentality against bohemian spirit.

SAM: It’s hard for me to get into what that song is about. I don’t even know myself half the time. Usually what happens is I’ll think of a song, sing it later, and then write it down. That song is about two or three different things.

I’d imagine you relate more to the free thinking boho rather than the God-fearing rule player.

SAM: Probably. I don’t advocate sticking to the rules of conformist, science-based viewpoints of how we’re supposed to live our life.

One of my faves, “It’s Raining,” meshes the familiar stutter beat of the Beatles’ “Oh Darling” with an Electric Light Orchestra vibe.

SAM: There’s an Irma Thomas song “It’s Raining” that I didn’t blatantly steal, but that’s where it came from. It’s got a Fats Domino-type thing going on. By the time we work things out, it tends to sound different from the original impulse of the song.

By mentioning blues belter Irma Thomas and R & B legend Fats Domino, you show an obvious affinity for rock’s ‘50s roots. Did you listen to AM radio as a kid?

SAM: Yeah. I’m not really old enough to have been around when Irma and Fats were getting prime airplay. (laughter) But I listened to the radio.

I tend to side with the bitter sentiments expressed in “Fuck Hollywood.” Its big screen orchestration seems to mock epic movie grandeur. Where’d that song come from?

SAM: That was one we normally hadn’t played live. It came together in the studio. A lot of Hollywood movies began shooting here in Portland, disrupting my life and bothering me on some level. So I had the idea in my head – fuck Hollywood. I couldn’t cross the street because they were doing Bruce Willis chase scenes. We do our own thing, record our own records, and that’s our fuck-the-Hollywood-mentality of big corporate propaganda and cultural manipulation via entertainment.

Portland has such a varied cultural scene. You played with Elliott Smith in the hard rocking Heatmiser prior to Quasi’s inception.

SAM: Portland is a small town compared to New York. San Francisco and Seattle seem much larger than Portland. So most of the musicians know each other better. There was no camaraderie for local musicians in San Francisco. Here, musicians support each other and people in town are appreciative of the local bands. There’s not a lot of tolerance for pretentiousness.

Your first two records were recorded cheaply at a home studio. Then, you ventured into professional studios for the next two. But with the recent availability and affordability of better home equipment, The Sword Of God benefits from improved audio quality.

SAM: The studio we did most of the recording in was a small 16 track studio and not state of the art. But we learned a lot about basic things we didn’t know on our first two records. I didn’t even set levels on the tape deck for the first album. We just turned it on and started playing.

You certainly made a lot of fun noise with that broken down Roxichord. Plus, your songs get more hook-filled and concentrated as you go long.

SAM: In reality, the actual Roxichord on the first few records broke around the time we did the last record. Now I use a Roland keyboard with a Roxichord sampled into it. The Roland has less Roxichord sounds than the original. So it might be time to step away from the Roxichord world.

Well. I heard you were banging the Roxichord at shows, knocking into it, and slamming it with shit. No wonder it broke! 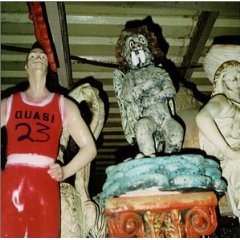