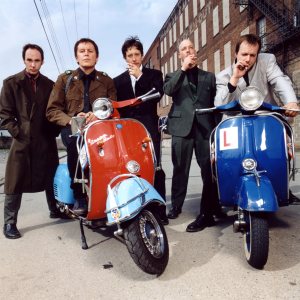 FOREWORD: Simply put, Bob Pollard, leading light for Guided By Voices, is the most interesting and funny interviewee you’ll ever meet. The stories he’s got are outrageously entertaining. And he exemplifies rock’s DIY lo-fi aesthetic better than anyone, releasing shitloads of albums under the GBV banner and, more recently, as a solo artist. I had dinner with Bob and his band in Little Italy during ‘01, when they were playing Bowery Ballroom in support of Isolation Drills. I’ve spoken with Pollard on several occasions. Look for ‘02s Universal Truths And Cycles and ‘03s Earthquake Glue, two worthwhile late-period GBV works, in addition to the recommendations made below. This article originally appeared in Aquarian Weekly.

Besides being a major league beer drinker, here’s a few jock-related facts you might not know about Guided By Voices mainstay Bob Pollard. First, he pitched at least one no-hitter at Wright State. Second, he was a damn fine high school basketball player. These are things you only find out hanging around his brew-guzzling crew while eating clam pizza. 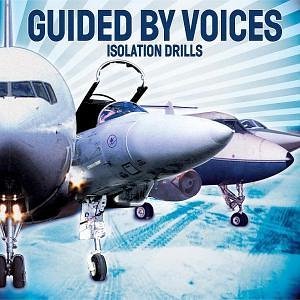 “We enjoyed working with Ric Ocasek (ex-Cars) on the last album (Do The Collapse). But he had a no drinking policy in the studio.”

Yet despite Pollard’s continual debauchery, he finally felt secure enough to share a broad spectrum of hitherto unrealized heartfelt emotions. Isolation Drills faces inner turmoil, insecurities, and joyousness head on with a deep-rooted lyrical expressiveness usually reserved for acoustic folk artists. The bright, jangly “Fair Touching,” the reflective “Twilight Campfighter,” and the schoolyard crush of “Chasing Heather Crazy” offer wonderful insight. But Pollard’s still not afraid to flaunt his playful side on “Want One?” and the punchy, Big Star-like “Glad Girls.”

The night after a packed-like-sardines Bowery Ballroom show featuring the whole new album in its entirety (plus varied faves from the recent past), I met up with Pollard and company at TVT headquarters to down some Buds and share some stories.

AW: So whatever happened with the Rolling Rock venture we spoke of a few years back?

BOB POLLARD: We were going for the endorsement. Every night drinking Rolling Rock, just living it. Which can kill you very quickly. Just to get free beer we thought Rolling Rock was an easy target. But then we played a show in Athens, Ohio, when the Rolling Rock official came. He checked us out to see if we were worthy, but we didn’t get the endorsement and I’m glad ‘cause that shit gives you the nastiest farts the next day.

How has life on the road changed since the early ‘90s?

At first I didn’t like it. It was brutal. But I grew to like all aspects of being on the road. I didn’t like going eight hours from town to town, but now I use that as a period to relax and get over hangovers and read. It makes the tour go a lot quicker.

How do you deal with multiple hangovers? Don’t you drink water before going to bed so you don’t dehydrate?

You just tough it out. If we did a show without getting drunk and wild what would the people think. It would suck. Nathan said he’d boo me! In ‘87, Mitch Mitchell (former bandmate), my brother, and me would wear our Northridge varsity jackets because it stood for our band, the Needmores. We had to drink Colt 45 and smoke Camel non-filters. I got them both hooked on smoking cigarettes and I feel bad about it. (laughter) Now, their lungs are all clogged and they gasp for breath and go, “you fucker.”

Do you ever write songs while inebriated?

I don’t write the songs drunk. I write them in the morning when I’m drinking coffee. I just want to get drunk and talk to people at night. I feel more motivated in the morning. This past year, we were gone forever and were away from the people we love. At the end of the tour, I drove from San Diego to Athens, Georgia. I got pretty introspective and started writing reflective lyrics about what was going on with us. When I wrote the songs in ‘94/ ‘95, they’d be about werewolves and witches…

And that damn “Kicker Of Elves.”

Right. I was happy and silly and hanging around kids. (editors note: Pollard was an elementary school teacher) I like to write lyrics first because it’s much easier to match the music up to the lyrics. Then the lyrics are gonna be good. If you write the melody and the music first, you have to fit lyrics to that and it’s not as good. So this became a dark record. It’s uplifting, too. I mean, it’s not Joy Division or Lou Reed. It’s still us.

So how does Isolation Drills differ from the previous album?

Ric Ocasek doesn’t drink, so we had to play sober (on Do The Collapse). But Rob is more like us so we drank and smoked. The atmosphere was more laid-back and we got better performances. I wrote about 35 or 40 songs for Do The Collapse, but there were a few good ones left off the record that we used now. These songs are stronger than the ones on Do The Collapse.What have you been listening to lately?

It took about three weeks to make 75 ninety minute cassettes – close to 150 albums – of the best albums from ‘67 to ‘70. (note: Moby Grape’s debut and early Little Feat didn’t make it)

When did you get hooked on collecting records?

My dad let me choose the twelve for a penny Columbia House albums. Then, I’d get money by any means I could. In high school, I’d skip lunch and keep the money for records. Afterwards, I’d have basketball practice and I had to survive on a pile of sliced pickles from the cafeteria. That’s how I saved up for Quadrophenia. My dad finally said, “I don’t want another god damn record coming in my house. (laughter)

(cracking up at that insightful wisdom) I’m gonna have to remember that one! I am the king of two-minute pop.

Now Bob’s gonna get all stuck up. (jokingly) So when are you gonna dump the current band?

I can’t imagine them doing anything to get kicked out unless they fuck up the schedule of events. Should I tell him the ‘Calvin’ story.

My team would tell me about it. They’d say, “you’ll see it.” He’d wait for you as you’re coming out of the shower with your little dick. He walks up to you and it just sways. (hysterical laughter)

Is that around the time you started your first band?

In ‘76, I had a heavy metal band called Anacrucis (fuck the spelling). I didn’t even know how to play guitar then. We kicked up Sabbath’s “Paranoid.” We did The Who’s “Behind Blue Eyes.” We did a bunch of Cheap Trick songs from the first album before they made it big. People thought they were our songs. We’d be driving down the street with Cheap Trick playing and the guy who owned the bar we played at would hear it and go, ‘Those guys are ripping you off!’ We did “He’s A Whore,” “Hello There,” and “Down.” As it turns out, it was important for me to get up on stage to develop confidence.

So what’s next for Guided By Voices?

More touring and more recording. I still have a lot of good leftover material. It’s all about the songs. If you don’t have good songs, it doesn’t matter how well you produce them.