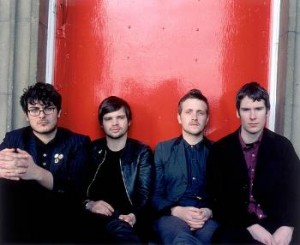 FOREWORD: I was sucking down some Amstel Light’s at Manhattan’s Canal Room on a weekday night when I got to meet the Futureheads, one of my favorite new bands of 2004. Leader Ross Millard was very forthright  as we chatted prior to the bands’ winning set. Afterwards, ‘06s News And Tributes could never match the energy level of the Futureheads impressive self-titled debut, but ‘08s This Is Not The World nearly did. This article originally appeared in Aquarian Weekly.

Take me back to the Futureheads first release, “Nul Book Standard.”

ROSS MILLARD: That was a 4-song EP. Two tracks, “Robot” and “First Day” were re-recorded for the album. The other two tracks were kicking around from the earlier days but we don’t do them live anymore. It was recorded in our rehearsal space. It didn’t cost anything to make. We just botched it up, but a guy from Rough Trade Records in London asked if we wanted to be the first release on his self-made bedroom label. So he pressed up a bunch of singles that collided quite nicely with our first tour of Hamburg squat clubs a couple summer’s back. For our first tour we had the double whammy of being on the road for the first time and having this seven-inch record to sell. That was our first experience getting press.

It’s a quiet place. England’s the sort of country where London’s a busy place and the media industry and record labels are all over. That’s where bands go to play their big showcase gigs. The further North you get, the more it becomes raw industry. Where we’re from it used to be shit buildings and coal mines, all those traditional British manufacturing based jobs. As those industries collapsed in the ‘80s, it left a lot of unemployed people. In certain areas, people are still feeling the effect. It’s more car manufacturing now. It’s not a happening place. It’s bleak, not that our area was particularly bad. That’s the way it is all up there – barren. When I was growing up, there wasn’t much to get into except music. I discovered some cool bands when I was real young. I chose to learn to play guitar. Where I went to high school, I couldn’t meet any people interested in forming a band. So I picked up the guitar as something to do with my time after a day at school. By the time I went to college, I met people in a similar position. We gravitated towards a youth project in the center of town aimed at putting kids in different areas together to encourage collaboration. It was a great thing, like a government initiative project. If it hadn’t been for that, we wouldn’t have met and there’d be no Futureheads.

I was studying while the three others were working jobs. We slowly put together some songs but didn’t even consider ourselves a proper functioning band until we came back from the German tour. Before that, we played only in our hometown. It was quite a dramatic change. But at that time we decided to ditch the day jobs and give music our full attention, even if we were gonna be on a DIY scale booking our own tours to raise money to make our own records.

What bands influenced you while growing up?

The first band I got into that I really loved was REM, just before Out Of Time came out, when “The One I Love” was on the radio so much when I was eight. That band got me into indie music. As I got older, it’s all the Brit-pop like Blur. That inspired a lot of people to play guitar and give it a go. It seemed so easy. You hear the same four chords in every Oasis song so everyone thinks they can write songs. Looking back, I don’t appreciate Oasis as much, but that was still an important time to get into rock.

The first song we did, for six months in the band, we practiced it, shouting over guitars. It wasn’t that developed in the beginning. But the more you play, you just slip into feeling it a bit more and you can all of a sudden sing in tune and it becomes more natural. Sometimes someone will come in and shout something we could use or someone else will ad lib lines. That’s the most fun of it. Live, we want it to be like watching tennis, where your eyes are all over the place. You won’t focus on one particular person. For a long time, the only thing we had was the live show. We wanted to get better at getting songs down.

I remember seeing Mercury Rev on the Deserter’s Song tour when I was 17. I was excited. I’d never seen them before. You go, and the songs are amazing and the album’s fantastic, but they played slightly too long. You start looking at your watch, thinking ‘that’s not what we want happening at our shows.’ There’s a huge sense of disappointment. It’s much better having people wanting more. Then again, most of our songs last only a minute and a half. (guarded laughter)

How are the new songs your working on coming along?

Maybe we’ll make them a little less cluttered. We want to strike a good balance.