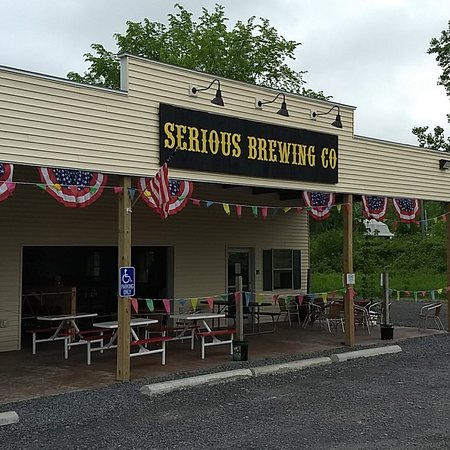 Just down the slope from Howe Caverns inside a pale-yellowed roadside dive posing as a Wild West outpost in the foothills of Schoharie County, SERIOUS BREWING COMPANY opened up springtime 2016.

A proud farmhouse brewery utilizing local ingredients, Serious has a small covered deck leading to the entrance of the diminutive oak-walled pipe-exposed pub.

Though I missed out on Merlot-barreled Anniversary 1 (also aged in whiskey barrels) and Anniversary 2, there were six stylishly modeled brews worthy of attention this March ’19 afternoon. Each beer is meant to showcase “New York places and events.”