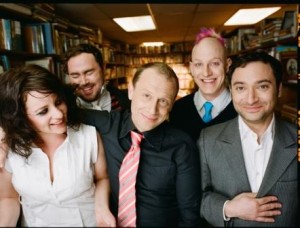 FOREWORD: I interviewed Stars leader, Torquil Campbell, the son of Shakespearean actors, in my wife’s van, following a great Mercury Lounge set.
His band was in town promoting ’05 US breakout, Set Yourself On Fire. He couldn’t have been more cordial as we chatted and drank some beers. Since then, he’s released ‘06s A Little Place In The Wilderness, with long-time New York City pal, Chris Dumont (under the guise of Memphis), put out another Stars record (the ‘apoc-timistic’ In Our Bedroom After The War), appeared in movies and on television, and directed local theatre. This article originally appeared in Aquarian Weekly.
Montreal’s spectacular burgeoning music scene has been graced with some highly intrinsic literate wits composing finely wrought symphonic triumphs. The consummate compassion displayed within the scene extends beyond developing heartfelt songs, forging deep personal relationships and a common bond amongst its newly elite competitive icons. One of the brightest Canadian combos, the Stars, formed when Toronto natives Torquil Campbell and Chris Seligman retreated north following a fruitless Brooklyn sojourn.

“It’s a happy coincidence how bands like Arcade Fire, the Dears, and Unicorns got their shit together at the same time,” Campbell insists. “Chris and I felt horrible about our lives, being 26 and living in New York City. So we began recording what had become the failures in our lives up to that point. That melancholy will always be there. The first album, Nightsongs, was me and Chris in his bedroom. We had no idea what we were doing, but wanted it to be different than the miserable existence we’d led. We wanted to make a cosmopolitan, glamorous, beautiful icy blue record.”

“Morrissey wanted to sound like the New York Dolls and Johnny Marr, the Smiths guitarist, wanted to the Ohio Players. The result of it, living in England where I was as a pre-teen, gave them a connection to their elegant, rough, totally unique, energetic fragility. That dynamic of three pot head instrumentalists hooking up with Morrissey – off in a corner writing in his book – captured my imagination. They changed my perception and led to Velvet Underground, the most underrated, important band ever,” Campbell concedes. 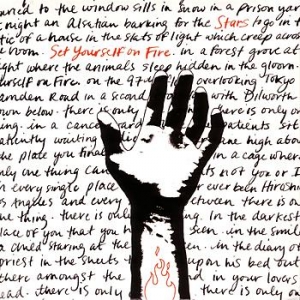 Campbell explains, “Part of what’s gone out of pop music is espousing a cause and showing some belief, even if it’s naïve and simplistic. People who know Chomsky understand it’s supposed to be emotional. Unlike artier experimentalists, Broken Social Scene, we’re tight, unified, very specific, and anal-retentive. There’s an urge to lose that, but it was like a project. We wanted to make an ornamental record put together perfectly. Now we’ll try to take chances doing other music.”

Proud to be part of “The Soft Revolution,” an inconspicuous peaceful uprising supported by fellow anti-war minstrels advocating radical nations to lay down arms for the betterment of society, Campbell and his minions profess merciful resolution. Accordingly, discordant screed “He Lied About Death” directly disses Bush’s “fascist agenda,” as Campbell’s whispered decree ‘bout ‘a devil born in paradise’ turns into a sneering jibe, ‘I hope your drunken daughters are gay!’

“We wanted to express the absolute chaos we felt the world is in, the sinister, devilish energy circulating around the world,” he offers. “The soft people who are losing must start to burn or it’s all over. Set yourself on fire, sacrifice evil and fear, before someone else destroys you. Rebel against the sons of archaic, cursed, soulless oil men doing business making millions killing people. They’re devils so divorced from society. You have to cry, sing, and be beautiful. As Lennon said, ‘A working class hero is something to be.’”

“I’ve known Evan since he was twelve. He was a sweet young boy who played in a Jazz group. He changed everything because he’s an amazing musician and integral part of Broken Social Scene alongside Amy. She came from a bluegrass-Country background. The mythical process of getting thoughts out of my mind, then inventing my whole little world – Heart was close to that mandate.”

Campbell may share a Morrissey fetish with the Dears leader Murray Lightburn, but both admit an affinity for prime Soul. “The Kinks were my first favorite band,” Campbell yields. “Then I felt more connected to Motown artists Curtis Mayfield and Marvin Gaye, Al Green, and black doo wop. They knew the potential and limitations of pop music on every level, played it to the hilt…and it’s sexual.”