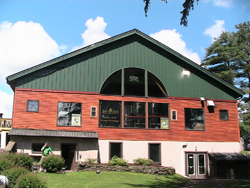 For my two-hour July 2012 sojourn with wife and youngest son, Chris, investigated several interesting new brews that bettered the flagship beers (which were no longer bottled for consumption but benefited from revised recipes by brewer Joe Percoco).

During my early January ’17 Poconos getaway, got to travel once more to Barley Creek. This time, I met owner, Trip Ruvane, a fun-loving character who has watched his ski barn-styled brewpub grow into one of the area’s most reliable food and beverage joints.

Revisited Barley Creek early November ’20 and sat in side tent with wife and dog while consuming four previously untried suds.