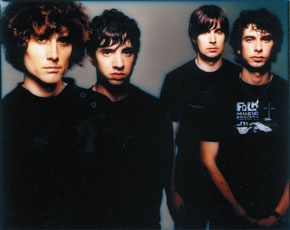 FOREWORD: I first heard of the Rapture when I was vacationing in Philadelphia, New Year’s Eve 2001, when a local college station claimed their EP was the number one album for the year. Their highly danceable tunes placed electronica and acid house elements into rockist structures without sounding overwrought or trendy. ’02 single House Of Jealous Lovers became their calling card. I interviewed the Rapture’s Vito Roccoforte in ’03 to promote their upcoming Echoes LP. ‘06s Pieces Of The People We Love was not quite as fascinatingly resourceful. This article originally appeared in Aquarian Weekly.

Their debut single, “The Chair That Squeaks” backed with a cover of Psychedelic Furs’ “Dumb Waiters,” was recorded after tracks for Gravity Records ’99 EP, Mirrors, which had darker keyboard-driven tunes, less danceable rhythms, and more of a Krautrock feel, were already released.

Roccoforte explains, “We were into German bands Can, Kraftwerk, and (British fusion tape-loop experimentalists) This Heat, but Mirrors came off way noisier than that and was recorded in our friends’ living room. We were living in San Francisco then but had San Diego friends with little studios. So we’d book mini-tours going south to Santa Cruz, Santa Barbara, and then San Diego. Gravity Records was the main hardcore label. We were the first non-hardcore band they offered studio time. At the same time, another friend started a label and put out “The Chair That Squeaks” in ’98.”

Moving temporarily to Seattle for six months, percussionist Roccoforte, guitarist Jenner, and bassist Christopher Relyea got signed by Sub Pop Records, decided the Pacific Northwest wasn’t to their liking, bought a used van with a few thousand dollars advance money, and hauled equipment and records to New York City. Though the Big Apple offered no immediate job security, happily Brooklyn-based noise-rock band, Black Dice, put them up in their house.

“If we made $100 a show, we thought we were golden,” confesses Roccoforte. “It took awhile for shit to happen. We had no money, planned poorly, and were homeless. I’d sleep in the van sometimes. It took three months to get on our feet. By September ’99, I finally had enough money to live in some guys living room. I built a wall out of bookcases and made my own space. Jimmy, our bassist then, left when we reached New York so we had no functioning band. We were miserable, but I liked the city’s energy. At the end of ’99, Luke, a new bassist (Mattie Safer), and me began doing shows. In Spring 2000, we did the Out Of The Races and Onto The Tracks EP.”

“It’s weird. The two worlds are becoming closer, especially in America. When we play live, we’re rockers, but doing dance songs. So the indie kids get into it and it’s not a huge shift,” Roccoforte concurs. “We’ll get kids at shows that like dancing, but the difference in the audience isn’t that obvious. However, we played the Winter Music Conference in Miami at the Ultra Festival and that was pretty extreme on the dance side.”

Oddly, the peripheral Out Of The Races exodus, “Caravan,” leaned towards prog-rock aspirations, a proclivity left unexposed by ‘04s sensational full length, Echoes.

“I’d love to explore that side again,” Roccoforte confirms. “That was made in our baby stage. It’s interesting. People either love or hate “Caravan.” But “Confrontation” moved closer to Echoes with its sniping guitar riffs, dense percussion, and spare setting.”

Concerning the prolonged struggle, Roccoforte says, “It was more of a personal conflict. They’re both very controlling people. But without those great producers, we might not have gotten that great DFA drum sound. James and Tim recorded Radio 4’s Gotham, Primal Scream’s “Blood Money,” some David Holmes tracks, sundry remixes, and assembled LCD Soundsystem. So we got to record at DFA’s renowned Plantain Studio.”

On-stage at a packed Roseland Ballroom in March ’04, The Rapture dressed casual and maintained a hard-working blue-collar ethic, discarding flashy modern dance glitz for flaky pale-faced exuberance. Wearing t-shirts and jeans, these stylish chameleons jumped from the bouncy bleat-beat bass-throbbed “I Need Your Love” to the expediently elastic “Echoes” (with its fleeting vocal break-ins), sustaining a loose-limbed carefree attitude galvanized from constant non-stop touring. The majestic intoxicant, “Heaven,” with its naked choral count-off intermittently breaking up its jarring tribal rumble, served as a major highlight.

As Roccoforte pounded skins with tom-toms and drumsticks, Jenner thrust himself center stage, aiming pleading sentiments directly at the crowd, flinging the mike side to side. Atop muscular grooves, Jenner’s aching, serrated tenor flailed like The Cure’s Robert Smith. For the dirgey piano turnabout, “Open Up Your Heart,” Jenner struck a few Jesus Christ poses. 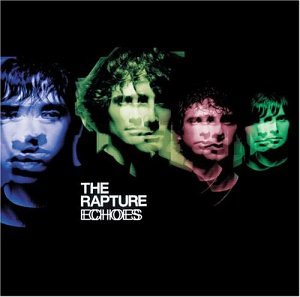 He recounts, “For lack of a better term, I was seriously into those bands a couple years before we started writing Echoes. We wanted to go a few steps further to find their broader based influences. We used guitars so it came out like Liquid Liquid. It was more of a subliminal or subconscious thing. A band like Public Image Ltd. was drawing from dub music. I liked no wavers DNA and Arto Lindsay’s full on Latin take. So we draw from all those influences. But with Echoes, we really tried to make straight up house music. The vocals to “Olio” sound like The Cure, but we were trying to emulate early Chicago house records with the 909 drum machine and 202 bass machine.”

Then again, techno-derived ecstasy-riddled late ‘80s Madchester hipsters the Happy Mondays also proved to be effectual instigators. Just listen to the drug-addled acid house provocation “Heaven” for solid proof. But what The Rapture may have benefited from mostly was the British rave scene’s uplifting devotional unity. Deciding to give co-writing credit to each member proved advantageous since many bands prematurely break up over publishing rights. This even split gives recently acquired saxophonist Gabe Andruzzi, sparsely utilized on Echoes, equal footing.

“We decided everyone in the band works hard contributing beyond songwriting. Sometimes Luke comes in with melodies or I’ll come in with a bass line or drum beat and we’ll write around that. It’s always different,” Roccoforte admits.

Now that they no longer need to live like destitute out-of-town vagrants and have experienced a modicum of international fame, hopefully The Rapture’s less volatile lifestyle won’t negatively affect future endeavors.

Roccoforte insists, “We’re different people now. Our personalities change. We’re never too comfortable and always push ourselves. I’ve been into ‘80s funk lately, like Sexual Harassment’s stripped down “I Need A Freak.” I’m on a huge Prince kick, too. I just saw him on an awards show with his band and they were great. He’s an amazing musician. And I’ve been feeling Michael Jackson’s classic pop dance music from Off The Wall and Thriller. It’s awe-inspiring.”