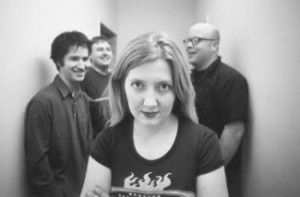 FOREWORD: Another band that had so much potential but fell apart too soon. The Reputation, led by wailing soprano, Elizabeth Elmore, was rapidly touring to reach maximum accessibility on influential Green Day-sponsored pop-punk label, Lookout Records. But when Green Day left the label, Lookout’s money revenue dried up and the Rep called it quits after two potent albums. Elmore, who was working on a law degree at the time we spoke in ’04, no doubt pursued legal work after her bands’ untimely 2006 demise.

Growing up in a conservative Champaign, Illinois, family, The Reputation’s Elizabeth Elmore became politically savvy at an early age.

“I grew up knowing a lot of Republicans. So it’s easier for me to avoid the whole demonizing thing because my parents were socially liberal moderate Republicans,” left-leaning Elmore offers.

I caught up with Elmore at her Chicago home following An ‘04 national tour to promote The Reputation’s latest work.

Compare To Force A Fate to The Reputation’s debut.

ELIZABETH ELMORE: I don’t listen to my own records. I’m too anxious and critical so I don’t have proper distance or perspective. There were bigger rockers on the first album. But I’m proud of the slower stuff on the new record. To Force A Fate was more collaborative. The bass-guitar lines are stronger. I like working with detail and nuance in the studio. On “Follow-Through Time,” Sean wrote the bass line and I wrote the rest of the song around it. I’d never done that before – writing around other people’s parts. But live, I like to do the faster songs.

E.E.: He was in the band Marino when I got to know him. They had Hum-like undertones. Sean sings backup live. I’ve been pushing him to sing more since he left Marino. He was in a really heavy rock band and I got him to sing “The Lasting Effects” with me. He’s like, “Great. I’m singing on the wussie, touchy feely song.” On “Bottlerocket Battles,” we sing all the vocals together. It’s about us fighting. It provides really good release onstage every night because we could yell back and forth at each other.

How’d you get John Davis of Q And Not U to offer up the accusatory elegy “March”?

E.E.: We’re long suffering 4-track tape traders working under the name Cosmopolitan making geeky ‘70s light rock songs for the past five years. When the Rep started touring initially, we only had five songs of our own, so we covered friends’ songs. That one was never recorded and kids were asking for it so we decided to do it. It’s a pretty song.

You don’t sound like Liz Phair, but she’s also from the Windy City, independently free spirited, lyrically provocative, and intellectually expressive. Was she influential?

I was a huge Liz Phair fan. I got Exile In Guyville when I was 17. Within two months, I got to meet her at a Champaign bar and talk to her for a half-hour in ’93. She was lovely to me. That was a few years before I started writing. Her more provocative, dirty lyrics may be a little sensationalistic, but I have a high girly voice. So even though I have a tendency to sing what I think, I’m not that filthy. (laughter)Who else influenced you?

In college, I spent time listening to Jawbox and Shudder To Think. But I grew up on old Country and bluegrass. My dad would play guitar and there was a great alt-Country Chicago scene that exposed me to more stuff. I played Classical until I was 18 on piano. I didn’t discover nor have any concept of punk until I was 17. There’s some Sarge stuff that’s reminiscent of Velocity Girl or Small Factory. But I got into cheesy ‘80s classic rock and Fleetwood Mac. Everyone in Sarge liked Journey and I’d bitch about that. Finally, I gave Journey love. It’s good driving music.

Getting back to Fleetwood Mac, I think your soulful earnestness is similar to Christine Mc Vie’s, though your lyrics are more cutting.

The weird thing is many people think my lyrics are about romance. But only half the songs were. The last Rep record, there were only three romantic-type songs. For this one, there are only one or two specifically about romanticism. Some transcend it. Only “Follow-Through Time,” “Lasting Effects,” and maybe “Cartograph,” are about anyone I had a relationship with. I tend to have intense relationships with men that are problematic on many levels. But if you’re a girl and there’s a ‘he’ in the song, everyone thinks it’s romantic.

“The Ugliness Kicking Around” is an interesting neo-Classical dirge.

We cover (Elvis Costello’s) “Almost Blue” on the first record. That’s similar going into three minutes of French horns and strings. So for “Ugliness,” I’d just got a keyboard from Wilco’s Jay Bennett. I had it in my room and I’d go home drunk after the bars drinking beer and smoking and that song came pretty fast. Joel was an upright bassist originally. He did the string arrangement, which adds a lot.

You should give that tune to Rufus Wainwright. (laughter) After that, you end the album with “Bone-Tired,” a traveling ode with trumpet, tenor sax, and trombone.

We didn’t think we were gonna put that on the record because it had no lyrics. We weren’t comfortable with it and hadn’t played it live. Finally, we took it to the studio thinking we’d strip it down and save it for an acoustic version. I said, “Let’s try it. If it sucks, I won’t use it.” But we got a cool organ sound and the vocals down and everyone loved it. I thought “Ugliness” was such a dark song that I wanted “Bone-Tired” to lighten the mood. I didn’t think anything else would work.

What did producer Mike Hagler bring to the recording?

Mike had worked with Wilco, Neko Case, and other amazing stuff (by Billy Bragg, Handsome Family, New Pornographers). I thought he’d push us in the studio. He plays a mean tambourine and looks funny doing it. But since I haven’t listened to the record, I’m not sure how I feel about it. He was saying how big amps sometimes sound smaller in the studio. So literally every guitar track but one was done through vintage 10 to 15 inch combo amps. That was cool because I wanted the guitars to be more diverse and rangy. It’s sleazy to use Pro Tools, but I got to take parts from different things and punch them in.

Will you ever revisit Sarge’s material?

No. They were a totally different band. If I play solo, I’ll do those songs. Otherwise it’s disrespectful to the Rep. The first couple tours, someone would yell out for a Sarge song and I’d have to go, “I think you’re thinking of another band. Sorry.”

What will you be doing with your law degree?

I graduated four months ago. I got three weeks off. Then I have to get licensed in October. As long as the band is still going, entertainment law may be something I’ll do privately. I do have law school loans and I need money that isn’t going to come from the Reputation. I’m a big artists rights freak. I had a triple concentration on Civil Litigation and Dispute Resolution, Social Policy & Assets, and Public Interest. So functionally I’m interested in litigation. I can do the sleaziest litigation and be happy because I’m made to be a trial attorney. But I’d like to work in social policy.