On my January ’12 trip, I reinvestigated one of the best Northeast brewpubs and another one just getting restarted under an Irish banner. The former, WILLIMANTIC BREWING COMPANY, serves a quickly rotating selection of finely detailed handcrafted beers alongside fine food. The latter, TULLYCROSS recently changed hands from John Harvard’s affiliation to craft its own likable libations.

Growing up in Bridgeport during the Seventies, entrepreneurial Willimantic brewmeister David Wollner discovered microbrews when visiting his older brother at New York University. There, he was introduced to Samuel Smith Taddy Porter and Aass Bock at nearby Bleecker Street’s Peculier Pub.

“The critics wrinkled their noses at what tasted like carbonated cider,” Wollner recalls as the Allman Brothers play in the background. “The judges said next time double the malts, cutback sugar and add fresh hops. The next few years I won with a stout, old ale and pale ale.”

Then, he found the boarded-up, water-damaged post office that’d be a local sanctuary for hardened beer enthusiasts. By ’97, the spacious Willimantic Brewery would open and thrive, becoming a true destination point.

At age 50, the seasoned owner-operator realized the long hours were taking their toll. So he allowed Braddock to take the reins on a few recipes. A current Thomas Hooker associate with a production background, Braddock helps organize, take inventory and brew on-site.

“I was invited to go to Boston’s Extreme Beerfest, but failed to fill out the $200 Massachusetts license form. I’d donated beers for years and got invited as a guest but was left with a special beer from an old English homebrew recipe,” Wollner shares. “I boiled a chicken, soaked it in the driest country wine, put in a bag with raisins, mace and clove, stuck it in the beer and let it ferment. I had ten gallons of this Cock Ale for Weird Wednesday on cask eight months later. Needless to say, Cock Ale caused trouble. ‘Pump that cock!,’ customers groaned. Some said it came with a large head. It was spicy, like a winter warmer. The chicken added some body.”

As I dig into my wife’s LA Smog pizza (spinach, mushroom, onions and garlic atop mozzarella-cheesed wheat-floured dough), Wollner joins us as we break into Bohemian Hopsidy. Lively lemon-seeded and grapefruit-peeled orange rind bittering and woody hop dryness contrasted its creamy crystal malting.

When Wollner’s beverage manager passed away suddenly in 2011, he made a tributary Maibock, Marge’s Meisterbrau, a wonderful honey-dried, orange-fruited, peach-licked, Vienna-malted medium body that warmly concluded my latest Willimantic journey. 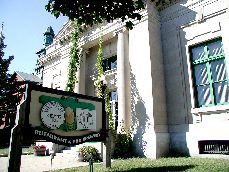 Amazingly, on my third trip to Willimantic Brewing, February 2011, there were seven (!) more new beers to try. I’d already quaffed eleven preferable libations on my past two visitations, but there were two amazingly distinct and differentiated stouts to discover as well as a terrific IPA, expressive pale ale, and four other favorites. My wife and I settled into a vegetal pizza while dipping into lightest fare, dry-hopped German Pils, Hope & Hops, a perfumed corn-husked wheat-grassed moderation with lemony grapefruit tingle that may’ve topped tranquil Carrier’s Credo Cream. The latter, a dry-bodied grassy-hopped maize-flaked wheat-cracked clover-honeyed cream ale, placed cooked veggie, orange rot, lemon meringue, and white apricot illusions in the subtle backdrop.