FOREWORD: I first met Cali garage punks, the Willowz, at a stunning Mercury Lounge show during ‘05s Talk In Circles tour. Two years hence, I was really in their camp, driving them to the city for afternoon setup at, I think, Bowery Ballroom. Richie’s mom got us all lunch that day. Anyway, we had loads of fun drinkin’ beer and cookin’ herb. I turned that li’l venture into an ’07 High Times interview session. But I missed a late summer show a few months later due to a bloodied finger. Sorry, Willowz. I await another solid album. This article originally appeared in Aquarian Weekly.

A contagious punch drunk anything goes attitude courses through the veins of the Willowz charmingly over-the-top, hefty 20-song Talk In Circles, their breakout second album for virtuous indie label, Sympathy For The Record Industry.

Cleverly integrating garage rock inertia to the overall jubilant tunefulness, the Willowz muck up and pulverize any poppy tendencies, settling for a harder sound than nearby Los Angeles’ shiny happy scenesters such as Rilo Kiley and their growing legions. And they’re brainier than hometown Anaheim headliners, No Doubt, and, for that matter, any pedestrian local emo and hardcore rip-offs. Voices jettison in and out of bustling arrangements, interlocking whiny male-female shrieks that fall just short of Robert Plant hysteria.

“My step-dad was in early punk band Youth Gone Mad with (producer/ art illustrator) Paul Kostabi, who made our first two records,” Follin explains. “Afterwards, Paul had a band, Psychotica, who toured with Tool and Iggy Pop. They were on Lollapalooza’s main stage with Devo, Soundgardern, and the Ramones. That was obviously an introduction to Nirvana, too. So I began discovering punk stuff early on.”

Thereupon, French director Michael Gondry used loose Velvet Underground-prompted “Something” and pallid anti-folk number “I Wonder” for Eternal Sunshine of the Spotless Mind’s fine soundtrack. Then, though they were still barely able to manipulate their instruments, appeared initial long-player, The Willowz Are Coming. Its basic ideas came from listening to loads of diverse records and half the songs were written in the studio while they were being learned, giving the project a startlingly skewed, scattershot rawness.

“Jessica (Reynoza: bass-vocals/ abstract painter) got all her dad’s classic records, mostly Soul like Jimmy Smith. Alex (Nowicki) actually played drums in a band with Greg Gagne of the Adolescents son’s band. Dan (Lowe: guitar) got into music playing in a church band,” informs the seemingly shy Follin. “I’d always made up songs as a little kid, but this was the first time I ever did anything substantial.” 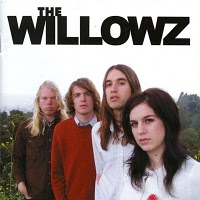 With a cheap budget, producer Kostabi not only got the Willowz to rehearse properly and tighten up, he also brought along fellow old school punks to flesh out some songs for Talk In Circles. Cartoonish punk idol Keith Morris of the Circle Jerks added phoned-in vocals to Reynoza’s roughhewn X Ray Spex-gone-to-the-beach ramblings on “We Live On Your Street” and odd mod Jimmy Vespa (from swamp Blues-reggae-informed Mad Juana and trance experimentalists Hypnotwist) provided a smidgen of trumpet.

Follin recalls, “Keith began coming to our shows and became a fan. He’s working A & R at V2 Records now. Paul got the other guests, a few New York City guys he’s known for awhile, to help us out.”

Though Follin admits having an affinity for trend-setting Detroit garage rockers such as former tour mates, the Dirtbombs, as the Willowz became more proficient on their instruments a blues-y semblance crept into the admix. During the stammering “Toy,” a slow counter-melodic guitar peppers the scampering surroundings.

“Those are all B.B. King chords. I don’t feel guilty about it because everyone gets ideas from him,” Follin permits. “I’m also into Screamin’ Jay Hawkins, Howlin’ Wolf, and Muddy Waters. But I also like reggae. I love Jimmy Cliff (of The Harder They Come fame) a great deal.”

Beginning with the impulsive vexing sneer of “Ulcer Soul,” a visceral adrenaline rush where Follin whines the frantic catchphrase ‘take me hoooome’ in a nasal tone Smashing Pumpkins’ Billy Corgan would recognize, Talk In Circles springs forth as predominant wankering guitars crash into dangerously expeditious drum convulsions. Similarly, “No Name Notes” shimmies and shakes ‘til the chafing rhythm quakes. And the rudimentary free form psychedelic keyboards buzzing across the chewy harmonic convergence of “Dead Ears” get neatly set aside for Lowe’s inevitable crunchy guitar explosion.

Throughout, Follin seeks romantic assurance; hoping love will conquer ambiguous feelings of insecurity and uncertainty in an insane universe blighted by derision and divisiveness. The world weary “Unveil” decries ‘modern girls’ nagging him in the ‘modern world’ with a counteractive hesitancy weaving indeterminate lo-fi indie rock candor into abstruse Velvet Underground paleness. Closing instrumental cathedral organ epilogue, “We Can Die Now,” is a fitting finale. It not only confirms the excruciating lyrical malignancy Follin reveals from top to bottom, but by way of its contented title, contrarily celebrates what the Willowz must, beneath it all, realize is an astounding accomplishment that’ll be difficult to best.

To bring a bit of civic pride to the proceedings, and perhaps snub those who’d believe the Los Angeles area only venerates hollow secondhand corporate rock sellouts, the Willowz had photographer Johann Wall randomly document their Anaheim digs in pictorial form for the encased CD leaflet.

“We met Johann in Canada. She came on tour with us,” Follin shares. “We just wanted to show where the music comes from. There’s not many bands from Anaheim and I think some people have particular prejudices against what they conceive as a narrow musical landscape.”

Proving they have the gumption to open up the stale auricles and polluted minds of a youthful generation reeling from constrictive regulated commercial radio fodder, the Willowz clobber the limpid anti-competition (lame as shit American Idol heroes; faddish teen pop zeros; faux hip-hop freeloaders; ceaseless emo-core deadbeats). At least some promisingly formidable local foes would be welcome as friendly competition at this precious moment in time, but I’d bet Silver Lake there ain’t one within a 50 mile radius.