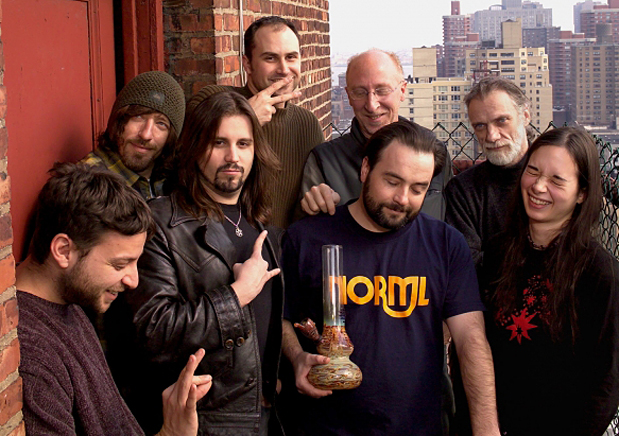 Classic High Times photo of most of my best friends at the iconic mag on Park Avenue taken probably before packing  up Bonghitters in my van for Central Park game ’round year 2000.

Since Covid 19′s temporarily slowing things down, I got a chance to peruse my friend Steve Bloom’s 420 ICON AWARD listing at Celebstoner. Since marijuana is inarguably the most durable, affordable, reliable medicine and brain enhancer (and its legalization will increase home growers just as small-batch brewing benefited homebrewers in the past decade), let me celebrate the most important marijuana advocates I befriended in New York City as a proudly independent High Times writer from 1992 to 2015.

The list below includes many people I hung out with covering NYC concerts for over 20 years. These are people I love, respect and shared herb with. Most did me favors like assign cool articles, access free concert tix, land free drinks, scoop industry party invites and be part of High Times historic Bonghitters. On this site, you could find my insightful interviews with published authors Steve Bloom, Shirley Halperin, Rick Cusick and Danny Danko.

1. STEVE BLOOM -  Undeniably the most important NYC pot advocate from the time he became editor at High Times. I always wanted to write for HT and he let it happen. Steve remains one of the most known, ambitious, loquacious and grounded personalities of the marijuana movement, supporting all causes, running numerous rallies, creating the annual Stony and Doobie Awards, running his famous Celebstoner website and managing the High Times Bonghitters to 29 straight wins in the ’90s (seriously, we were in Sports Illustrated and later NY Times featured our picture). He fiercely endorses pro-pot political candidates and alongside Rick Cusick, may be the most supportive male concerning women’s rights. Amen.

Steve knew fuckin’ everybody and was most capable running city events, one of the most treasured being the yearly NY Cannabis Parade & Rally (where my dog, Roscoe, friend Tom and myself ran loose security a few times). A rather stern SOB when his back’s to the wall and never one to veer off course when stating his firm beliefs, Steve may be the most professional marijuana advocate I’ve met. And he’s from the Bronx – where I grew up as a pre-teen.

In my eyes, Bloom was responsible for High Times hiring several well-respected authors such as Danny Danko, Craig Coffey and Dave Beinenstock. Even if he didn’t hire them, the love and common bond between these people is DEEP ROOTED. It’s a brotherhood I’m proud to be a cousin to.

Steve Bloom complained there weren’t enuff female reps on the 420 ICON list and ripped off 1,000 names for inclusion. Looking at my list, four of the first five people listed are Jewish and unless Nico Escondido’s Italian, I’ve not included any people of my own heritage. Hope the Italians won’t protest. So to all my Semite and non-Semite friends, I extend a Toking of gratitude.

2. SHIRLEY HALPERIN – Along with Bloom, wrote POT CULTURE, the absolute Whole Earth catalog for marijuana advocates. She moved her way up from Rolling Stone to Billboard to Variety editor and loves TV shows.

Shirl let me write for her independent underground tome, SMUG, when i was an ambitious music  journalist ’round 1992. I saw a ton of concerts and musical events ’round town with her and Bloom before she headed West with her husband to live comfortably in the Valley. At her 1st Annual Smug party, I met Bloom, got him stoned in my car, became a High Times contributor, and the rest is history.

3. RICK CUSICK - A man so hellbent on pot legislation, he tried continuing a groundbreaking lawsuit for a pot bust at Boston’s Freedom Rally (along with NORML chief lawyer, Keith Stroup), even after authorities wanted to squash it. He once demanded to be excommunicated from the church, too. What a wise-ass anti-authoritarian son-of-a-cop renegade. I’ll always remember smoking the ‘dipshit’ with him at HT HQ. A man so respected among women, they voted him in as head ambassador to NORML’s Women’s Alliance. He also worked with Whoopi Goldberg’s medical cannabis company as top advising consultant.

4. AL ARONOWITZ (May 1928- August 2005) – The man who introduced the Beatles to Dylan and pot! Al became a legendary Blacklisted Journalist after a bout with deceptive editors and cocaine. Al knew everyone in the Sixties. He wrote the book Bob Dylan and The Beatles from an honored friends’ perspective and became loyal to Bobby Darin, whom he called the most memorable personality he’d ever met. When Al was dying of cancer, he called my house to let me know. I felt appreciated that he could confide in me. And listen up folks! If he introduced the Beatles to Dylan, then he’s the spark that led the Beatles to record acoustic gems like Revolver and Rubber Soul in admirable Dylan style while Dylan went electric. Talk about World, not just music, history.

6. ELISE MC DONOUGH - Before heading West along with most of High Times crew (due to New York’s antiquated pot rules), Elise was already a highly regarded marijuana advocate, penning Marijuana For Everybody and a cookbook. I thrice brought back eight free growlers of beer from Magic Hat Brewery in Vermont (where she once lived) because they loved her and wanted to hire her before she took the HT job. The most level-headed, personable, friendly, reliable and loved of all HT staffers, I have met many people inside and outside the music and pot industry who simply adore her. Cheers from her buddies at Beef Trust Kitchen and Bar.

8. SAMANTHA AEZAN -  At barely five foot-two, Samantha Aezen befriended the Bonghitters over a decade ago, became a permanent team fixture while impressing everybody with her knowledge about marijuana and devoted connection to marijuana legalization. A free-spirited wanderer who lived at my house between moves, Samantha was actually quite conservative in her ways, never toking before work and maintaining a rather normal existence despite all the pot cretins surrounding her.

9. MATT STANG -  Valuable High Times staffer did everything from writing and photographing to ad work. Now HT’s Chief Revenue Officer (sounds important), Manhattan-spoiled Stang currently supports marijuana in the retail industry as well. Sometimes I’d drive Matt home from the office and cook some herb. Just a real nice guy and a pleasure to be around. Now on the Left Coast.

10. KYLE KUSHMAN -  Former High Times cultivation writer, Oaksterdam University professor and respectable ex-Bonghitters pitcher (before heading West), Kushman was there at the cusp of the expansive ’90s growing industry. I’d get stoned before our Bonghitters games with Kyle, taking a few solid hits. But this lanky head would cook like five bowls before pitching. How the fuck’d he see the plate. But we always won.

11. NICO ESCONDIDO - High Times media and cultivation expert, Nico and I convinced the teenagers running The Aquarian Weekly tent at the Meadowlands that he was a narc looking for pot-smoking bandits hanging out amongst them. He looks the part with his well-cropped buzzcut and six-foot something frame. Another Bonghitter – and quite good.

13. NATASHA LEWIN -  Natasha authored High Times Pot Smokers Activity Guide and to me, was the most conservative staffer, smoking lots less than most. Natasha always supported the marijuana cause, winning a best screenplay for Stoner Road. Lovely and talented, she gave me several assignments with high profile music figures such as Pharrell Williams.

14.CRAIG COFFEY – Veteran High Times director of technology. Once, I bought a friend of mine to HT and everyone was winding down in Coffey’s office. He was busy as hell while the rest of us were indulging, so my friend asked, “Are you the only one who does all the work?” His wife, Melissa, is also one of my favorite people.

15. JACKIE THE JOKEMAN MARTLING -  Probably upset because High Times has honored many celebs while he does his comedy routine prior to inductions, yet he never scored an award. Hung with him at Stony and Doobie Awards, wrote Aquarian article ’bout him, and went to his house for cool 4th of July celebration years back. Gaining increased popularity from the Howard Stern Show, Martling continues to do standup. I only wish I was in the limo ride with him to Atlantic City with Bloom and Cloris Leachman where Martling thereafter had everyone pissing their pants with his naughty routine during a celebration of (I think) Rod Sterling.