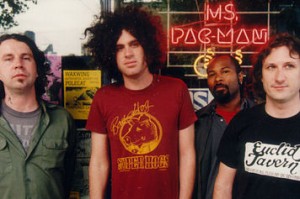 FOREWORD: It’s a goddamn shame that Zen Guerrilla broke up about two years after this interview with boisterous lead singer, Marcus Durant, took place to support the bands’ ’01 Shadows Of The Sun. They were one of the most energetically exciting live bands you’d ever wanna see. Durant, a towering Afro-puffed soul shouter, loved to bask in the spotlight and invigorate the crowd. So it’s a shame I have no idea what the hell he’s doing these days. This article originally appeared in Aquarian Weekly.

How could I ever forget the first time I experienced the frenetic mayhem of Zen Guerrilla’s live show at former Manhattan hot spot Tramps. Opening for ‘fantabulous’ hard rockers the Supersuckers and the Hellacopters, this feisty, uncompromising foursome jolted the crowd with a wholly original brutal onslaught of heavily amplified distortion-mangled Gospel-Blues. Fronted by gigantic 6’7″ Afro-haired banshee wailer Marcus Durant, these mischievous San Francisco-via-Delaware troopers commandeered a gut-wrenching assault more raging than any raucous rockers I’d previously experienced. And they never bothered to change the accelerated tempo, volume, or intensity for the sweaty half-hour blitzkrieg.

Multi-cultured, wild-eyed, grungy-looking freaks regurgitating trashier psychotic noise than the MC5 once did, these University of Delaware graduates tore it up on-stage with an unmatched volatility, brevity, and malevolent fury. Taking inspiration from abrasive Touch & Go indie rockers like the Didjits, Laughing Hyenas, and Lee Harvey Oswald Band, as well as Rhythm & Blues, Zen Guerrilla succeeded in intimidating its awestruck audience. 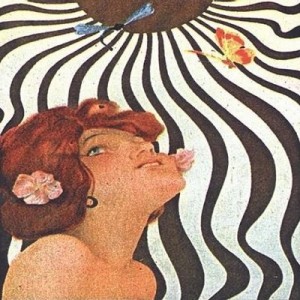 I woke Durant at noon with a call to his Vegas refuge. He’d been gambling and partying the night before with his soon-to-be-married Houston-based brother and his mom. In a scraggly-voiced, half-awake state, Durant claimed “it was a good excuse to drink and play Black Jack ‘til 6 A.M.”

How has Zen Guerrilla improved in the studio since Positronic Raygun?

MARCUS DURANT: One big difference is we self-produced the early records. I learned about technique from (our current producer) Jack Endino. We take his genius and keep pushing him to extremes, exploiting his full potential. It’s a good working relationship. He’s like a big brother we’re battling back and forth.

Did you listen to a lot of Soul music as a kid?

MARCUS: I grew up in Southern Delaware below the Mason-Dixon line. My dad is black, mom white. When my dad got back from Viet Nam, he couldn’t work, so he’d sit around and listen to the Motown Sound, the Stylistics, Ohio Players, and Funkadelic’s Maggot Brain over and over. On the flip side, my mom’s side of the family was from England, so we enjoyed the British Invasion. They were huge James Brown fans and were into Jazz. One of their big faves was Marvin Gaye’s What’s Going On?, which left a huge impression on my life.

What a great place to come from. The genuine soulfulness and Cold War tension of urban music that existed then could never be matched.

MARCUS: You couldn’t copy that social and economic atmosphere of the black community.

Why’d you move from the East Coast to San Francisco?

MARCUS: Primarily the weather. Honestly, we required a change. Your environment influences the creative process. Also, our significant others at that time were pursuing law degrees and graduate school in San Francisco.

When I first heard Trance States In Tongues, I thought Zen Guerrilla was emulating Jon Spencer during his Pussy Galore daze. But I’ve read that your band may have existed before them.

MARCUS: We started around the same time. I saw Pussy Galore a long time ago, live. You can’t help but be influenced by everything. You can’t ignore his contribution to the Blues.

MARCUS: I’ve always played with sounds and tape loops. “Subway Transmission” touches upon my hip-hop influences. In my opinion, Terminator X was one of the greatest Jazz musicians. People will argue he’s not Jazz, but in 100 years when people look back at the hip-hop landscape… I’m emulating that. It’s like the frequency groove I put at the end of Positronic Raygun.

That Positronic groove thang reminded me of Curtis Mayfield’s Roots or Superfly era.

MARCUS: That was me playing with tape recorders and two old record players with Scotch tape. You create a loop that way. You use a piece of Scotch tape to hold the needle down.

What’s with the Motown-Philly screeched vocals of “Graffiti Hustle”?

MARCUS: You know, Philly’s got huge roots in Motown. I have a special place in my heart for Philly. I earned my wings in the ghetto. Me and my guitar player lived in deep North Philly writing music and absorbing the urban struggle. It was our first introduction to the inner city experience.

Did you buy instruments from Pat’s Music under the elevated trains?

MARCUS: He’s a huge Jimi Hendrix fan and so was Stevie Ray. We’re all beggars and thieves in rock and roll. As a youngster, you’re exposed to many things. We’re only giving back what our personality allows us to give back to rock and roll. The roots and foundation have already been established.

I heard there’s a hyper-driven cover of Iron Maiden’s “Trooper” available on single concurrent to Shadows.

MARCUS: We were huge Iron Maiden fans when we were thirteen. Rich and I were in rival Maiden bands. I was in Flight Of Icarus and he was in Iron Eddie. It was all tongue in cheek and served as an introduction to “Sympathy For The Devil.” The duality of man and good and evil were important lessons learned. “Trooper” is out on Safety Pin Records. The B-side is “Mob Rules” by Black Sabbath in the Ronnie James Dio days.

Any good stories about debauchery on the road?

MARCUS: No. We reserve that for the stage show.