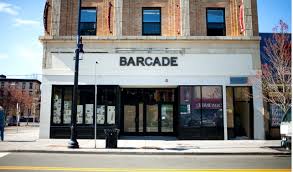 BARCADE EXPANDS TO JERSEY CITY AND BEYOND…

Barcade introduced one of the best original concepts for a craft beer bar during 2004. Its five owners, led by hands-on entrepreneur Paul Kermizian, wanted to re-invigorate the homey recreational experience of drinking beers with close pals while playing vintage arcade games. The novel whim would prove to be the coolest idea for an urban pub common city folk would like to hang out at, much like Kermizian’s Brooklyn apartment had been theretofore.

Barcade’s nascent Union Avenue post in the trendy Williamsburg section of Brooklyn has continually increased its customer base over seven years, allowing westward expansion to Jersey City and Philadelphia in 2011. Not only does each Barcade site offer 24 revolving taps of respectable American beers, the caliginous metropolitan clubs also feature select stateside liquor plus red and white wine. Furthermore, each location keeps it green by utilizing 100% wind-powered turbines instead of electricity.

“We keep our theme of having only American craft beer on our taps,” Kermizian says as we celebrate Weyerbacher Night in early November. “Two-thirds of the beers come from the local northeast corridor and two-thirds are sessionable beers the general public enjoys. There are only eight or nine strong Big Beers on tap at any given time because there’s only so many people who’ll drink 10% alcohol beer. That’s a cutoff. But we always try to be flexible and stylistically diversified. We always have the basics – a pilsner, India Pale Ale, and stout available. The rest we play around with.”

I originally met the dark-haired Kermizian after conducting a phone interview for American Beer, an insightful travelogue documenting forty national breweries the Bound Brook native perused with four close friends, three of whom co-own Barcade. We were at a High Times softball game with fellow documentary pal (and Cape Ann brewer) Jeremy Goldberg quaffing several Canadian brews bought during my family trip to Niagara Falls. Then, I introduced him to high profile Ipswich brewer, James Dorau, who’d brought down a few sixtels of rich and creamy Ipswich Oatmeal Stout for Barcade to tap in November ‘05.

Over the years, I revisited Barcade prior to many chic Williamsburg rock shows, trying my hand at Frogger, Pac Man, and Donkey Kong. Though known by some as a nerdy hipster joint, there was always a multifarious assemblage of people on hand at this former metal shop. Word spread and regional growth was just around the corner.

“Al is a former chef,” Kermizian explains as he serves up Weyerbacher’s 14th Anniversary Wheat Wine during Weyerbacher Night a week after my initial Jersey City venture. “We wanted to bring in someone knowledgeable about preparing food and helping us choose appropriate beers. We told him to run with it and have fun.”

Whether trying the pickled hop shoots from a Washington State farm or the rosemary uncured ham, each short dish from the small bar side kitchen is handled with utmost care. And the sandwiches and cheeses look yummier than the usual bar food.

“The food in Philly is based on the same concept, but there’s also a yard so we could take advantage of a smoker for meats,” Kermizian informs as he pours a cinnamon-nutmeg-spiced Weyerbacher Pumpkin Ale from a hallowed-out pumpkin.

Though Jersey City’s site had much better structural integrity, Philly’s larger Barcade was carved out of an all-wood old carriage house (with a back barn and side yard). Construction began at the same time, but the very detailed work at the Philly spot took more time to shape up, even if Jersey’s antiquated liquor laws burden most startup beer bars.

“New Jersey’s bar scene is pretty clandestine except for Jersey City,” Bacchiochi divulges. “Fortunately, most of our clientele is young professionals that are serious craft beer enthusiasts. Jersey City’s transportation is easily accessible and we have a lot of customers within walking distance.”