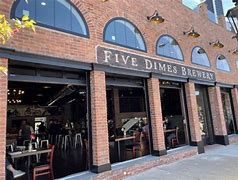 It finally happened. Northern Bergen County issued a license for a brew pub over a decade after the craft beer boom started! And it’s a good one with completely massive crowds comin’ in every night til the tanks finally temporarily ran out of beer in May.

Owner Chris Alepa went for a Munich beer hall style when he first decided to go forth and break ground at this former variety store where a large buffalo mural establishes Five Dime’s bovine logo. Retaining a rustic Industrial warmth, its 20-seat, red brick-walled bar spotlights a resilient tiled draught station and a few TV’s (for sportsbar enthusiasts). Plus, the reclaimed wood furnishings add an exquisite feel to the overhead-doored pub.

So successful was Five Dimes that after a few weeks in business they had to shut down to replenish its liquid stock.

In the near future, Mc Lean will no doubt bring his love for sour ales to the fore and experiment further outside stylistic boundaries.

After a few springtime ’22 visits, I was able to consume nearly all initial public offerings.