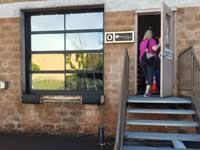 Founding brewer, Ryan Diehl, realized he had to immediately expand his space after operating a small one-barrel nano. Now a mid-sized microbrewery, Imprint’s equipment includes its original 7-barrel fermenters (bought for its first expansion) and a newer 15-barrel system plus an experimental stainless steel brite tank.

My wife and I try a mild pilsner and lager before grabbing a few impressive stouts, then get a bunch of canned goodies for the road (reviewed in Beer index).