Residing at the painted lady rowhouse-lined Abell neighborhood, former home of historic Oriole Park, Baltimore’s PEABODY HEIGHTS BREWERY initially came to fruition during 2012 as a contract brewer only. Operating out of a large red brick warehouse, its memorabilia salutes the old timey Orioles (before they relocated six miles south to the Inner Harbor in the ’90s).

Since 2015, Peabody Heights has been crafting its own proprietary beers as well as outside brews for local independents. Its rustic cement floored brew room features 20-plus draughts at the Edison-lit left side bar (with centered TV). Wood tables and counters fill out the spacious interior and black pipes hang from the white-bulbed ceiling. There’s also a heated patio tent.

During my two-hour December ’22 lunchtime perusal, a seasoned DJ spins tunes for a growing crowd of local residents – some with children and dogs. I grabbed a dozen recurring and one-off suds. 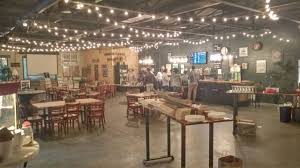