FORWARD: Though Alice Donut obviously never garnered the aboveground attention they deserved, these heady Big Apple bohos certainly caught the attention of rabid dadaist punk-metal fans. In 2004, they returned from the grave with “Three Sisters,” a winning collection that inspired a full-scale subterranean comeback punctuated by ’06s “Fuzz.” After a live set at former Lower East Side club, Brownies, a few members begged me to drive them home to Brooklyn after imbibing bong hits. And I think another one was a reluctant speech writer or lobbyist for some conservative pundit.

“Everyone in the band has distinct character and different influences,” Antona offers as we suck down Sierra Nevada Wheat Beer in my van one stormy April night on 2nd Avenue. “Stephen (Moses-drums) loves Frank Zappa, weird-ass Jazz, and Stravinsky. Michael got into Goth shit like The Cure and Killing Joke and used to hang out with greasers wearing AC/DC t-shirts. He was into twisted stuff after that. His guitar shit will go into 14/6 time when you walk in. Everyone has varying ideas and nobody gives an inch.”

Jung adds, “Tomas will write a song, but it never turns out close to what he thought it would be. We give it our own spin.”

“I’ll come in with an idea, play it for these fuckers. Nobody smiles. Everybody shrugs. It ends up being totally perverted,” Antona counters.

“Michael has eight hours of tune snippets. When he listens back, it’s not in the same key or has the same rhythm. Stephen and Mike start fucking around, then Sissy (Schulmeister-bass) does something.”

Jung declares, “He’ll be, ‘Do this!’ We’ll say, ‘We’re not doing that.’ It’s completely independent.” 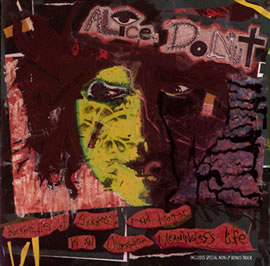 Despite such broad-minded autonomy, these adroitly deranged mongrels have anxiously tolerated each other’s piquant peculiarities and spontaneous whimsicalities throughout. ‘89s twin pillars, the savagely raw, playfully obtuse Bucketfulls Of Sickness And Horror In An Otherwise Meaningless Life and the sacriliciously schizoid Mule (original bassist Houghton’s final bow), set the stage for ‘91s metal-edged Revenge Fantasies Of The Impotent.

Jung recalls, “We did Revenge Fantasies in 14 hours. When we were doing the recording, Tomas was in the hallway getting lyrics ready. (Eccentric NYC producer) Kramer was a maniac. We’d try to hear something again and he’s like, ‘If you hear it again, it’ll lose the spontaneity. Ted would say, ‘Turn this up more.’ Kramer would rebut, ‘This is the mix!’”

“There was a story hidden in Revenge Fantasies and Kramer wouldn’t let me listen to the music,” Antona insists. “It ended up better ‘cause I would’ve changed the delivery. The first Gulf War was on our mind. That’s why we did Black Sabbath’s “War Pigs” and “Dead River.” There’s pieces of metal thrown in.”

“That song didn’t fit on the first album, but that was how we got signed to Alternative Tentacles,” admits Antona. “You’d see those 4” by 2” born again comics on the street. There’s one on alcoholism. This one was about child abuse and totally fucked up and offensive towards the solution.”

“We’d made a home tape that’d been played at San Francisco’s KUSF. Biafra heard “Lisa’s Father” and wrote us a postcard, then came and signed us,” Jung infers.

“Nobody’s buying the light in the ear theory,” Jung surmises.

Though more conventional, ‘92s wholly ambitious masterwork, The Untidy Suicides Of Your Degenerate Children, stands poised as Alice Donut’s crowning achievement alongside the ass-kicking Mule. However, notwithstanding great press and rising sales, concerned fans split into two camps speculating which direction they should take.

Antona explains, “Sonically, it’s best with noises and lots of different movements. It definitely had a louder production sound. Mule’s more playful and its lyrics might be better, but Suicides’ music is better and its mood grimmer.”

Though ‘95s resiliently pulverizing Pure Acid Park convincingly astonished their core audience by working banjo, washboard, and a Sissy-sung cover of Roky Erickson’s primeval psych classic “I Walk With The Zombies” into the mix, Alice Donut soon called it quits.

“It’s meant to be a trilogy (hence the title),” Antona claims. “This is the straight album. Some people say it sounds like rough drafts. These songs were longer, then chopped up.”

Jung asserts, “The second part of the trilogy may concentrate more on chopping things up, then piecing them back together again in a studio band situation. The third one would be to play the stuff we changed around and bring it back to real time. But those two parts may not be the next albums necessarily. We’re not making any promises.” 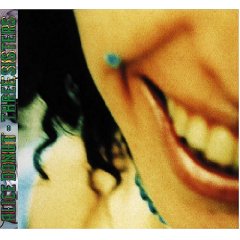 Even Three Sisters’ catchiest tracks maintain an undeniably cogent urgency. The hooky nasal-toned gimmick “Running Arms In The Philippines” packs an incessant punch mainstreamers should enjoy. Exploring a previously untapped sentimental side, the nearly poignant dirge, “Up Is Down,” faces everyday setbacks in an unexpectedly amiable humanistic fashion.
Comparing the current Lower East Side scene to that of the late ‘80s, both Jung and Antona confide that it’s more like Disney World now.

“I moved here in ’86,” Antona reminisces. “I still live on Avenue C. It was more exciting and fucked up then. There were lots of different music types: the Reverb Motherfuckers and the Willies. There was whacked out art – good and bad. The vibe and insanity influenced all of us. It wasn’t so codified. You’d see metal, hardcore, and soft folk bands next to each other. And it wouldn’t feel weird. At the end of 2nd and Avenue B was a heroin block. But it also had an amazing metal sculpture garden, the Garage. Even if you didn’t originally like someone’s art, you’d tend to be more struck by their individualism. The closed-mindedness of conformity has ruined this. Even the crusty punks and disco nights. I remember the first time I saw kids with enormous tennis shoes and bellbottoms in techno’s early days. Dee-Lite’s “Groove Is In The Heart” was a little splash. There’d be Gabby and hardcore punks, noise-rockers, a collection of characters.”

Jung follows up, “Back then, you’d fall into a hole in the wall to find great bands.”

As Alice Donut prepare to tour the West Coast and Europe before swinging back for an unofficial CBGB’s date in late July, busybody Giffen will likely rejoin the fearsome foursome as second guitarist. Long-time admirers already plan to expect the unexpected.