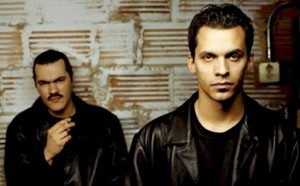 Take one of the best rhyme flowing freestylers, hook him up with an equally talented hip-hop producer, mix and match delicious beat samplings, and stir sufficiently throughout the course of a decade. The result: Atmosphere – a premier Minneapolis underground rap alliance initially revealed on a few impressive homespun cassettes. 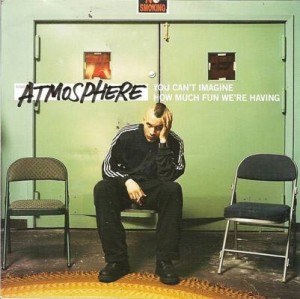 Two years hence, Slug’s satirically fronting on the retro-spirited You Can’t Imagine How Much Fun We’re Having – head nestled wearily in hand for the plaintive cover shot. His character sketches absolve psychos, barflys, and fall guys, the same maladjusted individuals that’ve always been the source of his crustiest ruminations. Perhaps a little too reliant on Ant’s old school breakbeats and turntable scratching for mod rap heads (mentioning extinct inspirations such as 2Pac and the Moonwalk), it nevertheless overflows with the same contemporaneously fast tongue-tied anxiety of yore.

On the retrenching vestige, “Watch Out,” Slug admits wanting to be like LL Cool J ‘til he started making records strictly for the girls. Female Gospel voices reinforce the ominous ‘bleeding heart’s club’ scurrying across “Say Hey There.” Polluted indictment, “Musical Chairs,” besmirches a psychotic bitch in heat and may’ve inspired Gnarls Barkley with its hazy flow. Flutes echo below the rhythmic boom of guitar-buzzed bass drum-boomed homecoming chant, “The Arrival,” a good time celebration of the first order.

But in direct contrast to Slug’s previously overwhelmed Midwestern strife, When Life Gives You Lemons has an earnestly sentimental fortitude that redirects the steadily depressing mind-messing daily blues Atmosphere’s notorious for. The heartfelt “Yesterday” mourns the loss of Slug’s dad in extremely reverent fashion. And refreshingly, the splattering trumpet blasts bedecking “Wild Wild Horses” give positraction to the synth-driven Rhythm & Blues fervency Earth Wind & Fire and the Moments once delivered. All in all, it’s a less caustic, more profound scrapbook.

I own all the Atmosphere long-players except ‘97s self-released homemade debut, Overcast!, and ‘03s Seven’s Travels, your first official record for Epitaph Records.

SLUG: You don’t need Seven’s Travels. It sucks. It’s my least favorite. It’s so disjointed that when we tried to glue it together, the glue stands out and is better than the album. It’s like when someone hands you a toy to play with and you could see the glue creeping out around the corners. As a kid, you put everything in your mouth.

Lucy Ford: The Atmosphere EP’s reminded me of De La Soul with its minimalist tone and thoughtful lyrics.

That’s funny. I refer to Seven’s Travels as my De La Soul album because it’s all over the map. But we try to do each record differently than the preceding one. We have these weird rules we attempt to follow. We literally take the last song on prior records and let it fit the tone for the next record. It’s not a relatively fun road to do that. De La Soul had an optimistic tone even though there wasn’t necessarily optimism in the songs.

Right. Your songs tend to psychoanalyze daily problems. I try to find restful resolve but it’s oft-times difficult to uncover.

This particular record, I tried to instill resolution all over the place. I did look at my past material and realized the story could be over if there was no resolution. Not to sound corny, but I love Common. One of the best things he does is offer resolution. A lot of rappers just offer the story and say ‘this is what happens,’ especially in this ‘keep it real’ mind state we live in with hip-hop. Even though we know it may not be a true story – we know they didn’t shoot anyone, they’d be in jail – but we accept the story for what it is. But we never get resolution. What happened to the gangster next week when he got arrested? It’s just these quick glimpses and I realized that was all I was doing. Grant it, you could only get a fats glance in three-and-a-half minutes. But I wanted to leave more room to let it seem like something worked out on When Life Gives You Lemons.

The solemn reflection, “Yesterday,” in remembrance to your father, offers some resolve.

He passed away shortly before we started making this album. There’s a lot of stuff I wrote that’s purely autobiographical but doesn’t make the cut for the record. “Yesterday” surprisingly made the cut. Normally, songs that ‘real’ don’t make it. I wasn’t doing anything too clever inside its word scheme. It was straightforward.

And it doesn’t need a big huge beat to push the message across.

What’s the skinny on “The Skinny”? I thought the rhythm drew comparisons to George Clinton’s “Atomic Dog.”

I’ll accept that. It’s funny. I just lit a cigarette and that’s what that song’s about. When we first wrote the song it was over a beat that was like a Too Short track. Because of the genre of hip-hop I’m boxed into, I can’t really write songs about pimps. I’m not in your traditional rap pimp manner. But the beat was begging for a pimp song. So I wrote “The Skinny” for it and used the pimp as a metaphor for cigarettes. That’s probably one of my favorite songs musically and lyrically.

“You” is one of the most uplifting pop songs I’ve heard this summer. How’d that come into being?

We were looking to write a Prince song. A lot of that song we were trying to model around Minneapolis. For years, people would accuse us of representing the Minneapolis sound. But I never really got it. I always thought the Minneapolis sound was not knowing what you’re doing. I look at what the Replacements and Husker Du did for their rock movement. I just think they got together and made these songs that production-wise were super lo-fi. Some of the writing is simple – it works. It’s catchy. It’s luck. Then I look at Prince and see he was making it up as he went along. Producers Jimmy Jam and Terry Lewis – look at some of the drum noises they were creating in the ‘80s. It was ridiculous, but it worked. People gravitated towards it and danced to it. But in the real world, I bet they were just doing their imitation of George Clinton when he started fucking around with synthetic drums.

There’s a lot of folks here just making art for art’s sake. But for the most part, prior to the internet, Minneapolis only got what it got through pop culture sources – magazines and standard media. There weren’t people moving here from Berlin to expose us to German disco.