Heather, who’d been watching Pee Wee’s Playhouse religiously, took their French moniker from a line in the movie and put it on a poster. Meanwhile former shoegazing art-schooled greenhorn, Erika, told her multi-instrumentalist keyboard teacher, Greg Peterson, they were seeking exposure. So he offered a spot opening for his respected indie-based Hoboken combo, The Scene Is Now. 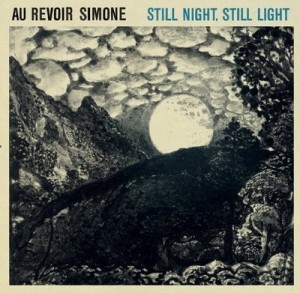 The gal pals passed out chips to stage-front fans during their encore, which included sunshiny baroque heartthrob, “The Lucky One” (reminiscent of ‘70s prog-rockers Renaissance). Like an electrified Shaggs, only with better fashion sense, haircuts, and performances, Au Revoir Simone bring palpable schoolyard innocence to fully realized synthesized adaptations.

I spoke to the cordial Erika prior to their one-hour set.

Have you ever heard of ‘60s New York duo, the Silver Apples? Brainchild Simeon Coxe used primitive homemade synthesizers, an audio oscillator, and other contraptions to make textural psychedelic elixirs in an obliquely roundabout way not far removed from Au Revoir Simone.

ERIKA FORSTER: Yeah. He wrote some offbeat surreal stuff. Being in a keyboard band I had to do my homework. So I found out.

Were you into ‘90s lounge-core sophisticates, Stereolab, as well?Yes. I worked at college radio and someone gave me a pile of CD’s and I got into them. Annie was more of a punk kid, but Heather loved Stereolab and Bjork. I’m a huge David Bowie fan who enjoyed all his different eras.

Thanks. We listened to each of the new tracks by themselves and realized we’re all the same age and came from similar backgrounds and in the scheme of things we had the same spiritual and personal philosophies. So Still Night, in similar fashion, became a concept. But we’re separated from it because we’re in it. So it’s hard for us to answer ‘Who are you?’ But it turned out to be thematically connected.

Thom’s a brilliant guy. He’s real good at listening to and interpreting music. He really captured each sound and made it beautiful. He was using two or three different mikes so we could decide later what to use. He knew which corner or space in the room would make certain sounds. He also knew so much about keyboards. We’d go to a dusty Chinatown apartment to borrow equipment that’d make us sound way cooler. We did recording at my apartment, Thom’s apartment, and (his wife) Shirley Halperin’s parents place.

How did you decide who sang lead on each tune?

A lot of the songs come from a certain place to begin with. Someone would sing a part they came up with – it’s never-ending. Everyone has their own style to bring to the table and we weed through it and figure out what’s good.

How’d you decide to have the same long hair, same clothing style, and similar slim-size dresses?

(laughter) We get asked if we’re sisters and kid around by saying we’ll only hang around people who look like us. Honestly, it’s like a marriage where you start to look like each other. We always had long hair. The fashion stuff has become more homogenous ‘cause we’re constantly asking each other if something looks good. But we are very different people.

I found it remarkable that The Bird Of Music’s “Sad Song” video, where you bake cookies, had half a million internet hits despite the fact you’re a relatively new indie band.

(Jokingly) Wow! That’s informative. “Fallen Snow” (with an amazing one million hits) benefited from a Beach Boys-like Pet Sounds synthesizer groove with Heather’s soprano taking the silky lead. In the video, you’re at a bucolic stream in the country.

That was done up near Woodstock. We heard it was pretty up there. That had a retro vibe.

Is Still Night, Still Light getting more critical attention due to your past successes?

People like it better. There’s less silliness and more cohesion. It’s all about the textures.

Are you aware of Bats For Lashes’ Natasha Khan?She’s a cryptic Goth artist whose keyboard synthesis has a correlative tone.

We played with her at South By Southwest two years ago. We’re in the same world. We have a lot of friends in common. Her new LP, Two Sons, really tricked me sounding like Kate Bush. She’s from London but lived in Brooklyn for a few months.

Notwithstanding all the keyboard swells, Au Revoir Simone’s songs have a striking folk feel.

That’s what Thom says. It’s a folk album without folk instruments – which is what we wanted and why we wanted to work with Thom (whose ‘90s band with Joe Pernice, the Scud Mountain Boys, crafted rural alt-Country material).

Have you thought of adding guitar or neo-Classical orchestration to beef up future endeavors?

We thought about using strings, but we didn’t need it. We didn’t go there. We started as an all keyboard band and that’s what we do. But we’re open to those ideas and up for the challenge. Annie’s a big fan of Bach and I’m into experimental music by Phillip Glass.