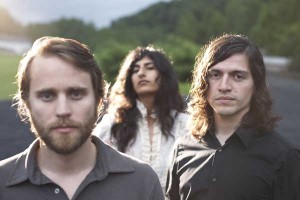 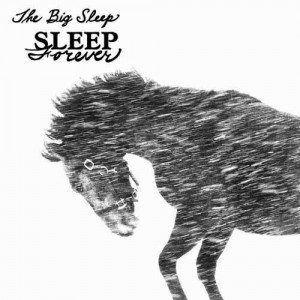 Likewise, Barria’s murkily laconic verbalized drone struggles to rise above the wrenching din of curdled flounce, “Pinkies.” And rock solid instrumental blazer, “Undying Love,” seriously scuffs up the frantic rhythmic baluster. Yet it’s the exhilaratingly bass-boomed Sonya-sung sonic cannonball, “Tigers In Our Hearts,” that most impressively impacts auricular perception, climaxing resolutely with a tantalizingly effectual cadenced punctuality closer to Led Zeppelin’s capacious metallurgic blast than the Pixies decisively bristling aggro-pop dissonance. Look for The Big Sleep to breakout and have it all in ’08, y’all – just like Bogie and Bacall.

I spoke to Barria via cell phone while he was stuck on line at the DMV.

How does The Big Sleep’s formative ’06 debut, Son Of The Tiger, differ from the recondite Sleep Forever?

BARRIA: We were younger, 25, at the time. I love the record, but it’s ‘of its time.’ It took three years to finish and half a year to come out. In that time, we wrote those songs. But since we met Gabe in 2004, we’ve matured quicker. He brought a certain intrinsic element and we became more locked in. We had two other drummers. At the Mercury show, David Jack Daniels (of local band, Levy) filled in since Gabe broke his arm a few weeks earlier. We seem to have drummer voodoo. We were in non-stop practice with David for that record release party.

The live show was nearly flawless, quite sterling actually, in my humble opinion.

There were missed, flubbed notes. (he laughs) We now use lights to make the show visually distinctive.

Who were your main primordial influences?

The Cure was my first love. They were the original band I was obsessed with when learning guitar at age fifteen. Brit pop bands Suede and the Verve are influences, but high above them is Led Zeppelin. A lot of people say we remind them of My Bloody Valentine, Sonic Youth, and Black Sabbath. While I love them, I don’t listen to them nearly as much.

It’s basically meant to be ‘us forever.’ There are a few different reasons for it. Gabe had twin sons last year and things are happening really fast now. This record captures a snapshot, a picture, of us at this moment.

“Bad Blood” sounds like a wild improvisation given a solid foundation afterwards.

I came up with a big riff, brought it to practice, and hammered it out in one week. Conversely, there’s “Organs,” which we had for three years and never played it out because it was not up to snuff. Then, we got that extra essential part and that’s when we knew it was done. Sometimes things fall out of the sky and into your lap, other times it’ll be worked at ‘til it’s right. “Tigers In Our Hearts” started with a chorus-y riff, then I worked on the verses for awhile. I’m a World War II buff and I was reading a book about racism during the war and they had words for an ancient Japanese war song. They were taken for that aggressive in-your-face guitar song. “Undying Love” was an almost cock-rock song so we named it something not at all what you’d expect.

The solemn acoustic lullaby, “Little Sister” was supposedly written as an ode to your younger sister.

She lived alone in Boston and got sick once and I was visiting the hospital for a week. It was sad to see my sister, whom I love, having a tough time. She’s way better now. I’m sure I took it harder than she did but I couldn’t help her in anyway and felt terrible.

The expansive Brooklyn scene has spread beyond the artsy punk heaviosity of the last few years. How do you see Big Sleep fitting in?

I wouldn’t call it a focused scene. The musicians I like and am friendly with are very different than us. Dirty On Purpose are doing real well but they’re pretty poppy. But I want to get away from that ‘heaviosity’ a little if it’s possible.

How are your newer tracks, slated for future endeavors, coming along?

I feel the unrecorded songs may have less distortion and more variety. The songs are already pretty rhythm based, but I want to scale back on the guitar-in-your-face all the time. We’ve been loud and heavy for awhile so I want to bring in some more melodies. For me, it starts with the music instead of the lyrics. I’m making room for vocals but I don’t know how they’ll change our overall sound. There’s a somber, almost dour mood, I want to change for more uppity, happy tunes. It’s not necessarily conscious, but it’s worth aiming for.

Many tracks have psychedelic components such as resonant reverb, flailing chords, and trippy undertones. Do you ever compose or arrange any tracks under the influence of recreational drugs?

No. I use no artificial intelligence. (laughter) There’s no altered inspiration. That may change, but not for now.