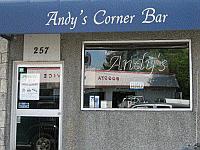 Tucked into the tiny Bergen County town of Bogota, Andy’s Corner Bar is neither run by a guy named Andy nor on the corner, but it’s definitely the perfect bar for beer connoisseurs frequenting Manhattan watering holes such as Jimmy’s No. 43, Hop Devil Grille, David Copperfields, and d.b.a.
Located along the narrow thoroughfare of Queen Anne Road, bordering Hackensack to the east and just off Route 95 five minutes from the Big Apple, this cozy storefront bar features only the highest quality brews from local and national microbreweries as well as international fare from England, Belgium, and Germany. A truly American family-run establishment, Andy’s qualifies as a New Jersey landmark in my humble estimation.

Opened at its current neighborhood spot in 1999, this vibrant beer hall’s history goes back to 1949, where it was incipiently stationed a few feet away on the corner lot (hence the prevalent ‘corner’ designation). Originally known as Bell’s, current owner George Gray’s father, Andy, began working there in the Seventies when it was called Jerry’s Oval Bar. Becoming its proprietor, the name changed to Andy’s Corner Bar thereafter. It was only a matter of time before son, George, discovered the joys of homemade brews and took over the operation.

“There was a home brew shop across the street that my friends started and I always liked good beer,” George explains. “When we decided to move the place, my son was sitting at a doctor’s office when his wife was pregnant. He ripped out a page in the magazine with a picture of a bar. He knew a guy who made bars. He measured our place and came up with the mural that would maximize our space. I wanted an oval or rectangular bar like the other place, but it couldn’t possibly fit in here. This bar is much longer, 18 feet wide by 55 feet long. Then, my wife’s friend, an interior designer, picked out a color combination with the walls and floors.”

Like myself, George remembers making purchases at Haledon’s Grand Opening Liquors during the late-‘90s. At the time, this beer Mecca, a veritable godsend for beer geeks, sold hundreds of different marketed beers. Personally, I’d buy dozens of different cans and bottles during each stopover to start my own beer compendium (www.beermelodies.com). I owe a debt of gratitude to Grand Opening.

George adds, “Most of their selection was imported beer back then. Half their beer went bad due to spoilage so they cut back on some brands. But they had a helluva selection.”

Admitting a bias towards robust stouts, Belgian beers, and newly fashionable sour ales, the bulky Bogota beer baron professes his favorite beer at the moment is Rodenbach Grand Cru. Though he doesn’t drink while working the bar, the adroit host instead tastes tapped samples before being dispersed to valued customers. Because of work obligations, George doesn’t get away enough to explore loads of brewpubs, yet he shows serious appreciation for Newark’s new-sprung brewpub, Port 44, and terrific New Paltz sanctuary, The Gilded Otter. One time he visited all five Major League baseball facilities in California, sojourning West to take in a few good beer joints along the way.

“San Diego and San Francisco all had good beer bars, but not Oakland. I’ve traveled around the country with my brother-in-law watching baseball games. We usually do a long weekend trip,” he says.

On my February 2011 visit to Andy’s Corner Bar, my wife settled into a tapped German wheat beer, the luxurious lemony banana-clove-draped Franziskaner Weiss, while I quaffed the previously untried Six Point Pilsner from Brooklyn. Sitting across the 12-stooled right hand bar in one of the six opposing black tables, we immediately encountered a gray-haired man claiming to have consumed at least one of each of the rear refrigerator’s one hundred-plus beers and ales. This boast was no joke since there’s at least a hundred people listed on the wall of fame plaque situated behind my head. As we speak, George’s cordial, diminutive wife, Barbara, working alone at this point, poured our servings with great care, adding a pretzel to the thin stick hanging out from inside the beer glass perimeter.

No doubt about it, Andy’s Corner Bar maintains a winningly rustic saloon appeal, with its gorgeous mahogany mural sprawling top-shelf liquor across the shelves and two olden TV’s (probably installed before high-definition became all the rage) clandestinely tucked into the corners. The hunter green-walled, red tile-floored space may be dwarf-sized, but the selection is fabulous and the ever-changing taps and cask-conditioned lines are clean as a whistle, allowing impeccable flavor profiles to shine through.

Before I met owner George Gray, I’d seen reviews on BeerAdvocate gloating about his bar’s immaculate tap lines. And I’ll be damned, the first time I chatted with George he was cleaning the cask lines for tomorrow evening’s Troegs Brewery celebration. He graciously apologized for being out of cask beers this evening, though no one’s complaining.

“Wednesday night is geek beer night with unique seasonals and unusual fare. Last week we had the new Sierra Nevada Hoptimum Imperial IPA alongside Belgium’s Gulden Draak. The kegs were both gone by the end of the night. There is a changeover crowd. The younger ones come in later. They’re almost all beer geeks. And almost as many are female now.” He adds, “I’ve been very impressed with the latest wave of 25 year-olds coming in. They know their beers. Twenty years ago, nobody had a clue.”

While the front jukebox plays classic rock like The Who’s “Going Mobile,” two bar frequenters join in on my typically sarcastic banter as I dip into Southern Tier Old Man Winter Ale, a caramel-toasted dry-spiced seasonal with brusque fig-date illusions. These long-time clients, one blue collar and the other white, live at least fifteen minutes away from Andy’s, but always make time after work to down a few great microbrews.

Naturally, the limited edition tapped brews are key to Andy’s growing success. I return the next day at 3 PM for the 9th Troegs Promo event. Immediately I reconnect with Jimbo, the retired gray-haired postal worker whose legendary beer consumption’s earned him a spot on Andy’s coveted ‘100 Beer Club,’ where trusty devotees quaff 100 different beers over a one-year span to receive territorial hall of fame recognition.

The dozen or so customers seated next to me at the bar concluded the best of Troegs three special offerings was Old Scratch #40 IPA, a sumptuously mellow caramel-malted, crystal-sugared delight draping soft peach, grapefruit, orange and grape tang across mild juniper bittering and neutral celery snip.

George concludes, “I cater to my clientele and get the people I want. It’s not everyone’s game. I’m not looking for a power drinker or someone who is looking for the strongest beer we’ve got.”