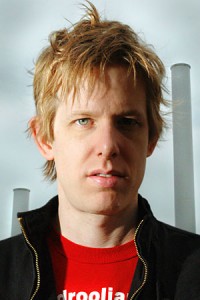 FOREWORD: Spoon’s Britt Daniel is a really nice guy. After I met him in Manhattan to conduct an interview supporting his bands’ breakthrough album, Girls Can Tell, I caught up with him in Columbus, Ohio, while doing a Mid-America brewpub tour of Cincinnati, Louisville, Lexington, Indianapolis, and Columbus in ‘02.

I drove down High Street towards Ohio State University after quaffing brews at nearby Elevator Brewery and saw this red shed with the words ‘Spoon’ on it. I thought, ‘Holy Fuck! It couldn’t be.’ So I pulled in the dirt parking lot mid-afternoon, saw Texas plates on a shitty red van, and knew it had to be indie rock idols, Spoon.

So I ask the sound guy, ‘Is Britt here?’ Sure as hell, not a minute went by and there he is. I said, ‘Britt, it’s John. Remember I drove you ‘round in a van for an interview a few years back?’

He looked up and said, ‘Oh yeah. You’re the guy who curses a lot.’ He was kind enough to put me on the guest list and I even got to shoot pool at the front of the club during Spoon’s last few tunes.

The oldest of five children, Spoon frontman Britt Daniel remembers how his father used to collect guitars and listen to marching bands and the Beatles very loudly early in the morning. Growing up in Texas during the late ‘70s, he admits his influences were “the Bee Gees and Paul Mc Cartney, by high school Julian Cope and Echo & the Bunnymen.”

Soon after, the tall blonde Austin-based musician began his own band with likeminded bassist Joshua Zarbo and drummer Jim Eno. Though he now dismisses Spoon’s Pixies-influenced Matador Records debut, Telephono, the Texas trio’s ’97 seven-song Soft Effects EP, and their ’98 Elektra release, A Series Of Snakes, proved Daniel was one of underground rock’s most melodic composers.

Crisply recorded at Eno’s new studio for respected indie, Merge Records, ‘01s Girls Can Tell relies less on distortion and more on reverb, making it sound more classic rock than post-punk. Daniel’s multi-textured harmonies bring together the most accessible songs he has yet assembled.

“Me And The Bean” is a tremendous adrenaline rush; the punchy li’l quickie “Take A Walk” conjures the Buzzcocks fiercest punk; and “Take The Fifth” gathers steam from its rumbling “Pump It Up”-styled bass-drum momentum.

I caught up with Britt at Houston Street’s Fast Guy Eddie’s for a drink, but it became apparent the place was going to be too loud so we hung out in my van to shoot the breeze on a hot summer night in Lower Manhattan. 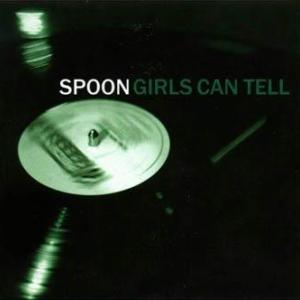 How does Girls Can Tell improve on past recordings?

BRITT: These songs just kind of came out. The longer I do this, the better I get at writing, and the better we get at recording and arranging.

I do notice a few ‘80s influences on some of the songs. The vibe of “Everything Hits At Once” reminded me a bit of the Cure or Squeeze in spots?

BRITT: There’s all kinds of eras going on. I was shooting for a ‘60s songwriter sound. The main thrust of the album was to make it about real traditional sounding songs. There are modern elements on the album, but that was the general direction I tried to hint at.

Lyrically, it seems as if the strongest songs are upbeat instead of downbeat and frustrated.

BRITT: The songs are less abstract than the last few albums, which means I tried a little harder. Before, they were abstract because I didn’t have enough confidence – which forces you to sing about nothing. Gradually, over time, I’ve either stopped giving a shit or got more confident.

You certainly get to the hook-filled center of these songs. Do you feel a bit upset that the critically adored past record, A Series Of Snakes, didn’t reach a larger audience despite the backing of a major label?

BRITT: When we signed with Elektra for an album, it was because of Stereolab and Luna. There was a tradition of serious music and slightly more ‘out there’ bands than a lot of other labels had. But Stereolab’s the only band we look at that’s cool that’s still left. So we’re not unique. A lot of good bands have been dropped by majors.

Melodically, the refreshing “Anything You Want” seemed to sum up the high spirit of Girls Can Tell.

BRITT: People say that’s the centerpiece of the album. That one’s very personal to me.

Do you usually write from a personal point of view. Most songs seem so real and vivid.

BRITT: A lot of these songs are about what happened to me. Before, I didn’t know if I could do that and if it’d still be cool. I’ve been writing a lot of songs this summer that seem to come from other people’s point of view. But some of it means nothing.

“Lines In The Suit” seems to be more contemplative and would probably fit in well on previous albums.

BRITT: “Lines In The Suit” is me in a very depressed state of mind. That’s not about clothes.

BTITT: That’s very surface. It’s just about finding shirts that fit right. It’s a real true story. My grandfather died and I had to buy some dress shirts since mine were all outdated or stained. Everything I tried on was baggy or puffy and made for Americans that want to be comfortable but not look good. So they pointed me to a small section of the store that had fitted shirts that were real tight. I said, ‘this seems to be a song.’ You can’t find fitted shirts in my size.

“1020 AM” has an acoustic tone in the vein of Syd Barrett or Nick Drake’s spare psychedelia, but there’s more of a hook-filled flow. Its theme of longing gets pushed along by the Mellotron’s flute patch.

BRITT: That was also spurred on by my grandfather dying. It’s got the line about ‘I carry you out’ and it starts to sink in. I had to carry his body out of the church which was a pretty powerful experience. When something happens that is so striking in your life, it is easier to write about.

I was trying to get to the bottom of “Believing Is Art.”

BRITT: That’s a more vague song. It has some good lines that don’t mean anything more than what’s said. It’s just like believing in yourself is sometimes so hard it can be an art.

Although you’re from Texas, I don’t detect an accent.

BRITT: I came up here to New York a few years ago. This summer I lived in Connecticut. I picked New London because it was somewhere I didn’t know anybody. Plus, it’s cool, unlike Texas. And I could take a couple hours drive, visit friends in the city, but still be very far away from everything to concentrate on writing. I knew I wanted to be around New York. So I put out feelers to live somewhere close.

BRITT: I have one 7″ record out from’96. I use my name on solo shows but from ’94 to ’96 I wanted a more interesting name than Britt Daniel.

I’ve noticed your albums are all available in vinyl. Are you an avid record collector?

BRITT: Yeah. I like my stuff to be on vinyl. Also, all our EP’s except Love Ways are on vinyl. Love Ways came out on Merge before Girls Can Tell. But it was recorded after the album came out. It sounds like a rushed version of Girls Can Tell and has extra tracks not available on the album. I like there to be an option for people who buy vinyl. I also have a huge vinyl collection. And it’s so much cooler to hold that big platter.