On Canning’s solo entrée, Something For All Of Us, he expresses foggy notions with murkier deep-toned timbres, duskier bass bottoms, and louder guitar feedback. A few sophisticated art rock gestures envelop the ethereal majority, but frayed edges rough up the valiant remainder, led by surrealistically striking new wave shimmer, “Churches Under The Stars.” 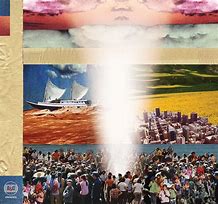 I spoke to Brendan Canning one warm April afternoon.

BRENDAN CANNING: I was born in ’69, grew up on AM radio, starting with Heart, Steve Miller, Fleetwood Mac, and Stevie Wonder. Then, I lived through the disco era. It’s hard to deny Andrea True, Bee Gees, and Donna Summer’s “I Feel Love.” Once I got through with that, I got more progressive at age twelve and got straight into Black Sabbath, heavy metal, death metal, then Industrial, punk, hardcore, Jesus & Mary Chain, and Public Image Ltd

The overwhelming theme of Forgiveness Rock Record seems to encompass death and dying.

I guess if you look at some titles, “Sweetest Kill,” “Forced To Love,” “Water In Hell,” all have seemingly negative connotations. On one hand, it’s death and dying, which citizens of the world live through – no different than other eras. When you get older, you realize, yeah, things are fucked up. So let’s play music. Hopefully it’ll bring some positive force to all the negativity. It’s a basic human instinct.

Were the first two BSS records, in part, thematic affairs?

There’s always a theme because if you’re together with individuals and putting all these pieces in place as a collective, when something sticks out too much as not being thematically aligned, you notice it. There’s no conversation as to what theme we’ll use. It’s not as direct. It’s a gradual process.

Go back to You Forgot It In People – a lot of music we make, “Chase Scene” for sure, have a certain camp and urgency. My band mate’s seven-year-old daughter does an interpretive jig to the song. I thought, ‘Yep. That’s what this song’s about – really jagged motions, modern dance.

“Art House Director” takes us South Of The Border with its blaring brass.

That was a departure. Maybe we picked that up in Mexico when we had a Mariachi band play with us. As far as the beat, I know Andrew’s a great Latin music lover. All sorts of things come out. Whether it’s a great piece of music matters no matter what anyone takes from our songs.

Lisa Lobsinger sings “All To All,” perhaps in homage to new wave art pop.

John Mc Entire heard this Giorgio Moroder sound running through that track and I’d be inclined to agree. There’s also a “Heart Of Glass” Blondie thing going on. We thought it was a weird ode to the Pet Shop Boys. But that might be a stretch. That took a long time to develop.

Did “World Sick” take awhile to construct with its grandiose peaks and simmering valleys?

The lyrics and song title are very much in line with death and dying. You open up your morning paper and you’re confronted with so much sadness. It’s a petty problem for us living in the privileged Western world. But there’s a helpless feeling of ‘My God, what am I doing?’ I encouraged Kevin to go deep and discover the lyrics because it was a long work in progress getting words right. But the guitar licks came quick. The last thing we added was the loopy guitar preceding the tribal drums. That was the one missing element we filled in.

How does John Mc Entire’s production on Forgiveness differ from previous efforts done with David Newfeld?

It’s a new era for BSS, a time for a shift in ideas and the way to approach the record. Making two records with David was a long, enduring processes. As much as I loved making both records and am really proud of what we accomplished because he was such a big part of our sound, it was time for something different. We’re all fans of John’s work with Tortoise and The Sea And Cake. We transplanted ourselves to Chicago and were on the same page. In Toronto or Montreal, everyone’s got business that takes away from focusing on the record. John added intrinsic elements in his own magic workshop on an eight-month journey.

Going back to your solo work, Something For All Of Us, did that have a resolute conceptual design?

I think I might be more inclined to admit my influence and put my stamp on the band. It was a good experience learning strengths and weaknesses. It’s a postcard from 2007 done with my next door neighbor, Ryan Kondrat, and his partner, John La Magna.

I have a whole record (of these type of songs). People in the band were expecting me to make a whole record like that. I’m really into noodle-y guitar – detuned or with various tunings. Drake’s a big inspiration. But it wasn’t the right time for me to make that kind of record. That was one of two songs done at a different studio. I had this lick, we recorded it, and since we were breaking icicles on a porch that day so they don’t come crashing down, we called it “Snowballs And Icicles,” a typical Canadian theme. Someone put a gorgeous little video up online that’s very sad going along to this animated 1930’s piece.

Where does Broken Social Scene go from here? Are there any cinematic soundtracks on the horizon?

We’ve got a lot of cinematic music in the can. There’s a few movies we’re working on while we do a month of touring and festivals to promote the record. We’re involved with Daydream Nation, It’s Kind Of A Funny Story, and This Movie Is Broken, which mixes Broken Social Scene live concert footage with a plot line that’s half fiction thrown in. Now’s the time to work hard, stay on top of things, and know this is our moment.