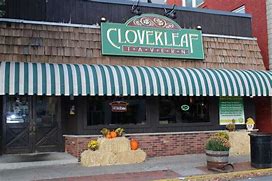 A highly respected Caldwell watering hole since prohibition ended in the Thirties, CLOVERLEAF TAVERN has given multiple generations of northern Jerseyites a homey Bloomfield Avenue refuge. Never afraid to branch out and change direction when necessary, the busy pub went from a men-only establishment to a family-oriented neighborhood hangout by the Seventies. But Cloverleaf’s greatest achievement may have come when third generation grandson, Ryan Dorchak, embraced America’s craft beer renaissance in 2006.

A red-bricked, brown-shingled exterior with green and white awning welcomes patrons to the casual speakeasy rife with several shamrock logos. 25 taps at the right side bar serve a rapidly rotating oeuvre of handcrafted microbrews emulating from a cement-floored cellar kegorator. Dorchak takes great care cleaning the keg lines since it’s the key to running a successful draught system.

“Draught beers were meant to be an extension of the primary brewery sold in a timely fashion fresh to consumers,” Ryan obliges. “We don’t want to have any off-flavors. And getting the proper gas mix is crucial for a better tasting product. All our beers run on a 65/35 blend of nitrogen to carbon dioxide, except stouts and nitros, which run on a higher nitro blend.”

Joining the family business in ’97 after graduating from Fairleigh Dickinson-Madison with a marketing degree, Ryan became extremely passionate about craft beer. In fact, the tall proprietor educates his bar staff through an on-line certification to insure their general beer knowledge.

“I could make more money pushing Coors Lite, but I’d rather have people come back more frequently to enjoy better beers at a reasonable cost. We always have a featured craft beer for $3 going from Monday through Thursday,” he insists.

There’s also a fun syllabus for Masters of Beer Appreciation given to those who try 45 beers over the course of the season and anyone requiring higher education could land a PhD (professor of hops and draughts degree). A lover of Goose Island’s Bourbon County Stout, Sofie Saison and Pepe Nero Farmhouse Ale, Ryan claims he has never had a bad beer from Bruery, Founders or Allagash. And he recently developed quite a taste for newfangled brettanomyces-bound sour ales.

In a way, Cloverleaf developed into a ‘beer bar’ by accident. Way back in 1976, Ryan’s father had a problem with Anheuser-Busch’s service so he simply expanded the beer menu. He immediately ditched Bud’s foamy fare for Miller, Schmidt’s, Pabst, Ballantine and imports such as Becks, Grolsch, Guinness, Harp, Heineken, Kirin, Krakus, Kronenbourg, Molson and Tuborg.

Ryan affirms, “He told the King of Beers he’d carry every other beer he could get his hands on and made sure people looking for Bud would be given suitable choices.”

Many historic photographs line the interior walls of Cloverleaf, founded by George Dorchak Jr. at the tender age of 25. He acquired Caldwell’s first post-prohibition alcohol license in 1933 and stubbornly spent 40 years holding true to the antiquated local ordinance forbidding women and children from saloons. By ’42, he purchased an antique wood bar counter (estimated at 100 years old) for what was strictly a men’s bar until ’75 when Dorchak’s son, Richard, turned the tavern into a full service public house. In ’90, a sky-lit rear atrium attached to the new outdoor patio was added.

“My grandfather told my dad he’d never make money selling hot dogs and burgers. He was wrong,” Ryan snickers. “Nowadays, 40% of our sales comes from burgers since we get fresh chopped meat daily.”

A diverse crowd of businessmen, seniors, sports fans, and couples fill out the Cloverleaf this early Tuesday evening in late January. Ryan and I settle in the intimate hearth-warmed left dining area to talk. Above this expanded first floor space is a banquet room perfect for parties, receptions and business affairs.

“There’s also a self-contained smoker that has a cleaning cycle for wood chips and this week’s special is smoked pork chiquito,” he adds before noting the majority of food is fresh and made from scratch besides the fried appetizers. “People think we’re in the food business, but we’re really in the hospitality business. 68% of people who have a bad dining experience won’t tell the staff and don’t come back. With today’s social media, customers take the experience and pass it on about the venue.”

Moreover, when there were only 90 brewers in the United States in ’79, it was easier to get away with watered down product. Now, there are 2,500 stateside breweries with wide-ranging choices. Originally, Ryan was introduced to Miller High Life as a youngster. But he spit it out. That’s when he determined big brewers’ stuff was inferior.

In ’99, Ryan’s father took him to the Great American Beer Festival in Denver, where he noticed 85% of the beers served were not available in Jersey. They stopped by a mining town where Tommyknockers Brewery had a “cool vibe,” then headed to Colorado Springs-based New Belgium, where Ryan was amazed by their four beers – including the now-classic New Belgium Fat Tire Amber Ale.

That set the tone for the eager lad, whose Czech grandfather and Irish grandmother passed on a rich European heritage of gourmandizing. For St. Patrick’s Day, Cloverleaf will feature homemade Irish soda bread made from his grandmother’s recipe alongside traditional corn beef and cabbage.

In this day and age of cookie-cutter corporate establishments, drab multi-chain restaurants and compromised eateries, Cloverleaf stands out for its fertile legacy, incredible cocktail selection and appetizing American cuisine.

For St. Patrick’s Day, 2012, my wife and I took a seat at the front entrance to try homemade soda bread alongside excellent corned beef and cabbage as well as tapped versions of Jolly Pumpkin Madrugada Obscura and Ballast Point Tongue Buckler (reviewed in Beer Index). Naturally, Ireland’s Guinness Stout was the clear favorite amongst the crammed in Saturday morning crowd.

Green and white St. Patty’s Day balloons, banners and streamers crowded the entire bar and the entire semblance was attired in green shirts, pants, hats or shoes to celebrate the annual event. Ryan’s 1-year-old son, Aidan, dressed in a Celtic kilt, danced to the traditional Irish music being played by a front-windowed duo who provided bleary-eyed versions of “When Irish Eyes Are Smiling,” the piper-shrined “Danny Boy” and a rousing sing-along about a Belfast prostitute.

The city of Caldwell and Cloverleaf Tavern celebrate this March 17th holiday with utmost respect. Zach, our bartender, is attired in leprecaun garb. Even a few city cops were dressed in kilts. And the Allagash Wit my wife and I consumed before leaving a few hours later was colored green for good luck. A great time had by all.

Since May’s spring flowers have now bloomed, I decided to once again check out Caldwell’s historic CLOVERLEAF TAVERN. This time, it’s to experience MBA night – a Masters of Beer Appreciation program hosted every first Tuesday of the month to honor graduates from hosting owner Ryan Dorchak’s stylistically diversified 45-beer curriculum.

Seated next to Mario, a card-carrying MBA grad who’s now a three-time PhD major (having consumed the requisite 45 beers thrice over and earning a sturdy 26-ounce Cloverleaf-engraved stein for pint-priced beers), I decide to become a Clover Card member for $5. It’ll earn me Frequency Dollars and bonus points while consuming terrifically multifarious craft beers.

Cinco De Mayo’s just around the corner, so the bar area is decorated with hanging piñatas, a confetti-filled Modelo can, a papier-mâché green cactus with Jose Cuervo insignia and various red-green-white streamers. To commemorate the upcoming Mexican holiday, I dig into the special-priced Taco Salad while consuming a Jalapeno Margarita (with its immense peppery burn outlasting the sweet coconut frontage).

As for Troegs Night, the packed minions showed major respect for spicy chocolate-fruited double bock, Troeganator. Plus, the 6:30 promotional raffle got everyone’s attention, especially since a 22-ounce bottle of Troegs’ rum-spiced, candi-sugared, pine-fruited Flying Mouflan Barleywine was one of the prizes.

There are now over 1,300 MBA graduates from Cloverleaf, each one having consumed the prerequisite pilsner-lagers, weiss beers, IPA’s, specialty and seasonal offerings alongside pale, brown and Belgian ales. But you don’t have to be a skilled craft beer denizen to relish the rotating line of brews convivial host Dorchak has picked to click. Besides, those who feel pinned in at the front bar could settle in at the sun-glazed back deck or private left side dining area for family or business occasions.