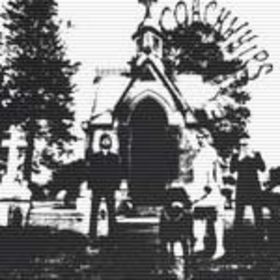 FOREWORD: Some of the best things in life just crash and burn. San Francisco’s frighteningly belligerent Coachwhips were probably destined to fast burnout due to the mayhem and friction they evoked in everyone who experienced them. Before they fell apart at the seams, Coachwhips left us a great ’05 album that’d puncture indie rock’s sleazy womb with queasy spume. This article originally appeared in Aquarian Weekly.

“Generally, a kernel of an idea gets expanded upon,” Von Hartman casually indicates. “John may have wrote pieces top to bottom beforehand, but now our material comes about by working a riff in practice or I’ll be screwing around with a drumbeat and whip out a song.”

“At six, I’d go to local department store, Labelles, with my mother. They had a small record section,” he recalls. “I began poking through my father’s Big Band Era records, but I didn’t get much out of that. Meanwhile, my mom had a cassette collection of Neil Diamond, Carly Simon, Anne Murray, and Roberta Flack. I bought a sound affect record, Sounds Of Terror, which had a cartoon dracula with blood dripping out of its teeth. Its craziness appealed to my childhood horror fascination. On a subsequent trip to find something similar, I came across Kiss’ Love Gun, with its monster-mashed superheroes and women at their feet. When I got home I was surprised to see it was loud rock and roll. I’d put on Kiss Alive, break out tennis rackets, and jam. From there, I got into British new wave metal and picked up guitar at age eleven. I thought I’d replace Randy Rhodes in Ozzy’s band.”

“We’re only gonna get noisier and dirtier,” Von Hartman concludes. “I can’t see us playing 6-minute DIY opuses. We want to keep the party atmosphere going, whether it’s a Who-Kinks vibe or another fucked up garage idiom.”