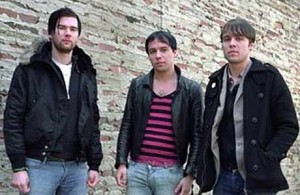 Challenging collaboration, “Be Safe,” crosscuts legendary Sonic Youth mainstay Lee Ranaldo’s ghostly misanthropic spoken word sentiments with the Jarman’s melancholically wailed harmonic intervals of ‘I know a place we can go where you’ll fall in love so hard you’ll wish you were dead.’ And the recessively downcast ‘cut off your nose to spite your friends’ disclosure lamenting “Shoot The Poets” closes the set on a sentient retreat into gloomy nightfall.

Who are some of your early musical influences?

GARY JARMAN: The first band I got into was Queen. But I don’t see them as a profound influence in our style of music. When I met with Wichita, the label we were initially signed to, they asked what my first single was. I said it was by Aztec Camera. They were cool fans of Glasgow pop so I was lucky to say that. Also, I enjoy Orange Juice. Edwin Collins produced our second record. Well into my teens, I got into late ‘70s punk – Sex Pistols, Buzzcocks, and especially, X-Ray Spex, then later, Sonic Youth and Nirvana. By ’92, my favorite was Brit band, Comet Gain, who I’d get to drum for. They do few gigs now and then. They’re like a ramshackle version of Television Personalities.

This little label, Worlds Fair, released them in America. The first album has a very apparent Beat Happening influence. It’s reminiscent of K Records stuff. It was naïve. We weren’t as aggressive live. We started out as a beat band. Gradually, our punk influence came through. The second was written on the road real fast as a knee jerk reaction to the fact we were three guys from Wakefield who’d never seen the industry. It’s a friendly fuck-off. I love that record’s cynicism.

I’ve heard former Smiths guitarist, Johnny Marr, now part of Modest Mouse, has been working on some tracks with the Cribs.

Our original intention was to get together, write songs just for fun, and of course, we just love him. We wanted to do a single and it came along quickly. He definitely fits into our plans. I’m good friends with the Modest Mouse guys so I don’t want to create any problems there. (laughter)

What kind of abstract designs or studio techniques did Franz Ferdinand front man Alex Kopranos bring to the production?

We had a few ideas but had never been with a professional producer. The first record we self-produced, though Bobby Conn did a track. We didn’t want some big shot producer. I didn’t want to be in the position where you’re just another band in the production line. Alex was enthusiastic and passionate. That’s what we wanted. He had lots of the same references. We had a fun time and worked well. His opinions were valid. He’d write real pop songs and hide them in lo-fi. I wanted him to make our music sound more fully realized. I was scared of going to a big studio. I didn’t want it to sound sterile. But it was easy to trust him.

“Our Bovine Public” seems to be a snippy l’il opener.

The more upbeat punk songs are generally my brothers. In the UK, there’s so many bands springing up trying to capitalize on the current trend of the scrappy indie guitar aesthetic. But that song has more literal meaning. Where we grew up in Wakefield, due to the amount of drinking and fighting on Saturday nights, it’s a commentary on people being treated like cattle, but acting like pigs. They reserve the right to act like animals, but complain when they get (skewered like one). Also, it’s frustrating to be compared to bands like the Libertines. It’s fine, but we started at the same time they did in 2001. We’d never heard of each other. Our labels tried to put us on tour together. But it’s annoying people think we sound the same. They’re our contemporaries. Now there’s a million generic bands we don’t want to get lumped in with. Most are ignorant copycats the UK press serves up.

How did the loose concept juxtaposing “Women’s Needs” against “Men’s Needs” come about?

It was never our idea to conceptualize the record. Before the band started, I was involved with Ladyfest – a feminist empowered, independent, not-for-profit, DIY festival. A lot of our songs are about self-examination. But a lot of dumb rock and roll cliches are inherently sexist. I’m proud to be against that, not bluntly or overtly, but politically.

“Shoot The Poets” seems to aim for the gut.

My brother had an idea for a long time that he didn’t want to live in big cities. He’d moved to Leeds and was bummed out. He wrote that in an ancient hotel in the middle of nowhere in a creepy town. The title comes from the frustration of seeing generic bands singing about nothing. They think they’re poets ‘cause they write dumb-ass pretentious pop punk. We don’t want to be thought of as rock stars craving attention. We have nothing in common with most UK guitar bands. Some are good, millions suck. America will be spared, but in the UK we’re confronted with dire, watered down bands.

How do you keep your renowned live shows exciting?

We try to keep things spontaneous and leave some things to chance. When touring for a long time, some bands become a well-oiled machine. It seems boring. I can’t imagine working like that. It’s like punching the clock. That’s the attitude we have.