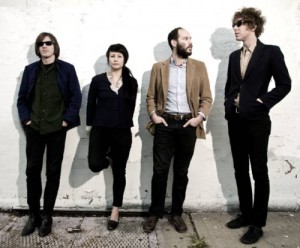 Meeting in Boca Raton through mutual friends, Velvet Underground fans Brad Hargett (voice) and JB Townsend (guitar), moved to New York City with no serious plan except to get the hell out of South Florida’s placid doldrums. After settling into Brooklyn’s presently thriving and oft-times peculiar art community, they began fooling around with music, practicing frequently, then recording a formative 7-inch 8-track single, “Shattering Shine,” under the absurdist moniker, Crystal Stilts. But while a crystal stilt, by definition, is bound to crumble, these independent garage-psych aesthetes, who’ve traveled north for inspiration, managed to stay upright.

“JB would come into the record store I worked at. He had a job across the street at a coffee shop. We’d talk about music and moving to New York. My sister and former girlfriend lived up there. Then we moved at the same time,” Hargett explains prior to the bands’ penetrating 40-minute set at hip West Village club, Le Poisson Rouge.

He adds, “Besides, there was only a small group of people down there in Boca who had common interests in the bands we liked.”

Adler, whose melodic chord structures may be informed by cherished ‘60s icons Lee Hazelwood and Rick Danko, recalls, “I worked in an art library. I knew Brad because he had a job at Rocks In Your Head record shop in Soho. Then, I met JB. I had a guitar in high school, but was self-taught. Crystal Stilts always had a rotating cast and I joined the group to play drums for a month. They liked the grooves I laid down, but eventually I was moved to bass.”

Hargett admits he benefited from having a circle of friends who just happened to be in bands. When he saw Adler play, he wasn’t so much impressed with his ability as he was drawn to his compatibility.

“Yeah. We wanted him to come aboard,” Hargett affirms. “I mean, it mainly has to do with being friends. You’re around people a lot in a band so you don’t want some total dick to be the guitarist even if he’s amazing. If you have similar tastes, get along, and have a sense of humor… that’s how we came together.”

Fortuitously, Hamish Kilgour (of respected Australian ‘80s underground band, The Clean), was in the audience during Crystal Stilts first show. A friend who has since left the band had hooked them up with an opening slot for Kilgour’s latest meritorious outfit, Mad Scene. Already quite familiar with the beguiling Aussie pop harbinger as well as many related Flying Nun artists, Crystal Stilts took this as an early blessing for future success. And the live shows only got better.

Onstage, Hargett’s stark prowess, lurking hung-over whine, and longing droned moans closely recall suicidal Joy Division pilot, Ian Curtis. There are no verbal exchanges with his mates and between-song chattering is non-existent. It’s pure business for Crystal Stilts, as they deliver each tune in a more cryptic, less styptic manner. The energy level is pushed upward and the arrangements are a tad elongated. Whereas Alight Of Night feels a bit unsettled, adrift, and far off, there’s a pervasive urgency and veritable immediacy bringing up each tracks’ intrinsic worth in concert.

On record, Hargett’s voice is too low in the mix, but live, that problem’s been resolved. Townsend’s tenacious guitar lattice works up a storm as Forrester lurches over a cheap Casio and Adler’s surf-styled and spaghetti Western-imbibed bass notes weave in and out. Newest member, Frankie Rose, bangs out a stompin’ tribal beat, striking a snare-drummed tambourine for chimed accentuation and standing for the set’s entirety.

“She prefers New York and has the right ‘tude,” Hargett confirms.

Concerning her old Left Coast environs, the independent dark-haired stick handler contends, “I think there’s a bit of a glass ceiling out there musically. Even getting on a tiny label out there is extremely difficult. I knew a ton of great bands that got no record signings but would if they came to New York. I feel like it’s a lot easier working out here.”

Rose’s primal stick work secures the duskily shaded foundation, fashioning a raw rhythmic rumble for the boys to rally ‘round. She provides ballast for each loopy, warped anodyne, girding the blush, sinewy textures and any ancillary reverb.

“I don’t think we’ll ever put out a record that’s totally pristine,” Hargett says. “The way I mixed this album, I thought I was being more accessible on purpose. I’d have no plans recording anything cleanly. Up until recently, I’d have lyrics and Andy would start playing a progression and then I’d start singing.”

Captive hexed opener, “The Dazzler,” sets the ghostly tone for Alight Of Night, as Hargett’s distant monotone voice flat-lines beneath a murky Velvet-y guitar figure that reappears for truncated Loaded-era grimace, “Verdant Gaze,” and dramatic finale, “City In The Sea.” Cadaverous narcosis, “Graveyard Orbit,” rides twanging surf riffs to an elliptical catacomb. Roughly up-tempo and wholly emotive, “The Sinking” earns points as the most approachable dalliance. And on their unofficial group anthem, “Crystal Stilts,” climactic organ ripples through a lo-fi Wall of Sound veneer while Hargett bellows about ‘courting… snorting… distorting… recording dreams to disturb the procession preserved in our mind.’

He declares, “I’m not gonna recite my lyrics, but “Crystal Stilts” is a theme song. I don’t want the lyrics to be apparent at first. If someone wants to get into the lyrics, fine. I labored over the songs’ order – a lot of choosing what to sing in a song. There were thoughts as to where each should go on the record to make things click. It’s all pretty specific. There’s a trajectory running through Alight Of Night, but it’s not necessarily a theme. I tried not to over-think.”

Hargett agrees, “When we first started practicing, that’s more along the lines of what we did. He would drum on a ten-minute jam and we’d condense it and start writing tighter songs.”

Before heading to the stage for tonight’s presentation, I ask Hargett what he’s been listening to for the last few months. He responded quickly, naming a few ripened and diverse artists.

And as I watch the band perform, those Bo Diddley influences seem to emerge at frequent intervals. Perhaps that unrefined approach suits them best after all.