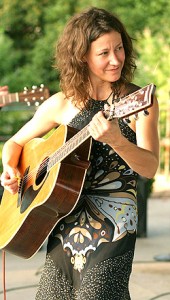 FOREWORD: Folks-y South Carolina-based singer-songwriter, Danielle Howle, deserves the same accolades thrown at similarly stylized lasses such as Lucinda Williams and Neko Case. Often described as an off-kilter Southern storyteller, Howle’s musical career may’ve reached a peak with ‘98s Do A Two Sable.
Since then, she released a few underrated gems such as ‘02s Skorborealis and ‘08s Thank You Mark (featuring bluegrass vet, Sam Bush, and a duet with fellow Carolinian singer, Darius Rucker – ex-Hootie & the Blowfish). During ’98, I caught Howle at the now-defunct Coney Island High club on St. Mark’s Place. She played the smaller, more intimate upstairs space, delivering humorous one-liners between agreeable acoustical offerings.
Nowadays, she’s just as likely to be involved with college educational programming as she is with her own isolated solo career. She still plays local dates from time to time. This article originally appeared in Aquarian Weekly.

Besides recording ‘95s swell solo acoustic set, Live At Mc Kissick Museum (which showcased her goofy in-between song rants, endearing social commentary, and stream-of-consciousness numbers like the ditzy nursery rhyme “Frog Song” and the snippy “Big Puffy Girl Handwriting”), she acquired local band, the Tantrums, for half the studio debut, About To Burst.

For her third and most ambitious album, Do A Two Sable, Howle divides her time between spirited rockers (the kitsch-y Bo Diddley shuffler “You Came A Knockin’” and melodic head knocker “Where Were You”), traditional Country (“If You Wanna Leave”), and dramatic pop (the posh “Host For The Notes” and sensitive “Feel So Bad”).

Whether writing spontaneous first-hand ditties, spinning whimsical romantic notions, or disguising melancholic moodiness in pleasant poetic settings, Howle proves to be one of the most gifted artists currently on the scene. She howls, yodels, whispers, moans and soars in a lovely fluttering voice that teeters between Joan Baez folksiness and Joni Mitchell artfulness. 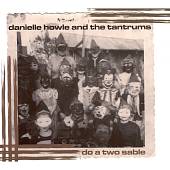 I spoke to the girlishly charming Howle via phone while she was touring D.C. After my interview, she went to visit her friend, ‘80s emo-core rock legend, Ian Mac Kaye (of Fugazi fame).

Since I originally missed out on the debut studio set, About To Burst, describe how it differs from Do A Two Sable.

DANIELLE: About To Burst was freaky and totally different. There were eight acoustic songs made at a D.C. studio and eight made when the Tantrums were a fledgling band three years ago. Two of the musicians, bassist Bryan Williams and guitarist John Furr, were in a band, Blightobody. I was in Lay Quiet Awhile, which had drummer Troy Tague. So we merged. That’s my gross, sick, sweet story.

The new album gets off to a rockin’ good time with “You Came A Knockin’” and “Feel So Bad.”

That’s just what I was writing at the time. We got in the mode of joyously rocking out.

Was the mesmerizing “Feel So Bad” actually a firsthand account?

Yes. I was sitting on the corner of Phillips Street and St. George in Charleston, SC. We have these trees with big moths on them in the south. They’re so cute. And in the mist of all this beauty two people were fighting on such a pretty day. I had to get that down since it made such a huge impression on me. It’s those little things in life that I fall in love with. My songs are just about snips of time – like “Host For The Notes.”

I’ve been to the University of South Carolina campus once. Did you play the local clubs to get started?

Mc Kissick Museum is there. That had such a wonderful intimate atmosphere. We’ve played the Elbow Room and Rockefellers. I was 17 when I wanted to be in a band. But my first band lived an hour-and-a-half away. Then I got in a local band called the Blue Laws. We got our name from the Sunday liquor laws which don’t permit alcohol sales. I didn’t originally have any serious intentions. I never went to other towns to play. We never made any money. But the bars did $900 in bar sales. I loved Rockefellers. It was cool. Then I played in Lay Quiet Awhile and went solo. So I’ve been on tour the last four years. I just love to play.

As an experienced local performer, did you find it difficult recruiting musicians as seriously committed as you were to start a band?

Yes. Also, it’s hard to find people willing to hit the road and bear with the poverty. As the Tantrums progress as a band, I hope other members will write some things. For now, I always want the albums to sound the way I want them to.

Many of your songs disguise melancholy feelings of uncertainty. You seem to be compensating for shyness.

It’s true. That’s why I talk so much onstage. I was so scared my songs would sound awkward because I wasn’t secure about my guitar picking and my singing. Telling stories makes me feel more comfortable. We’re all just vessels for what’s going on. I try real hard not to try too hard. When I wrote this album, I thought the songs I’m writing may not flow together. But I don’t like the laws that rule and stereotype albums. You’re taught brown doesn’t go with green, but the tree trunks are brown and the grass is green and they look good together. Some artists just want to stay within the boundaries of one style.

Did your parents encourage you to pursue music as a career?

My mother said I’ve been writing Country tunes my whole life. My parents listened to Glen Miller and Chuck Berry. My dad was a Jazz musician and I’m a self-taught musician. Everyone in my family is from small South Carolina towns near Darlington. We live two miles from Darlington Speedway on a little farm. We can hear the races from there. I come from a strange genetic pool of Country folk. Some are farmers. Some work in small town factories or the mills. Some are trapped in marriage and had kids early. They never got to pursue their dreams. Part of our job on this planet is to get to our dreams. I think some people are barren and it’s really sad.

What’s the first concert you attended?

I actually saw Toto when “Africa” was a big hit. My parents took me there while I was in high school. As it turns out, my producer, David Leonard, got a Grammy for that song. But I was always friends with the punk rockers in my school, checking out Black Flag and GG Allin. They kicked butt. I saw the Minutemen a million times. Mike Watt has truly inspired my music. And the Velvet Underground really honed me in. Through songs like Lou Reed’s “I Can’t Stand It Anymore,” which inspired me to pick up a guitar, I got to better understand all the punk that was coming out. So I quit college and learned to play guitar.

Did you get to open up for anyone real cool down in Carolina while just starting out?

I opened for Bob Dylan in one of my first hometown shows and really sucked. But this guy in the Tantrums who was washing dishes with me helped me get through it by playing along. I didn’t get to meet Dylan though. But I bet he’s pretty cool.