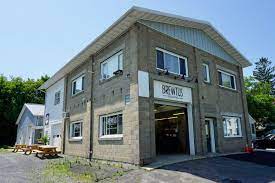 Behind Brewtus coffee roasters in a rustic gray aluminum storage house, the original REAL MC COY BEER CO. (with a second spot in Ballston Spa and a third opening in Albany at an old Huck Finn warehouse in 2023) set up shop at this locale during 2015.

Along Route 443 off the New York Thruway, Warbler’s spot-on recipes gained appreciation as I imbibed each winning elixir at the small freestanding brick bar. Its wood tables and picnic  benches front the pale green-walled interior of this cozy lounge. The beautiful wood floors reach the red-green tiled midsection where the green slate-topped bar featured nine glass-backed tap handles. Framed photos of namesake warbler birds line the walls as the Jets choke to the Raiders on the big-screen TV above my head at one of the picnic tables.

Local entrepreneurial brewer, Chris Schell, a highly experienced craftsman, previously worked at Cooperstown, Butternut and Robin Hood breweries. Since Schell’s shop’s only been open a few days, there are only four homemade beers readied, but each had its own steadied personality and crisp foundation.

Future Flurpy offshoots were promised as I depart – specifically a Peanut Butter & Jelly version as well as a S’mores knockoff.